Gillian Wearing and Claude Cahun: Behind the mask, another mask 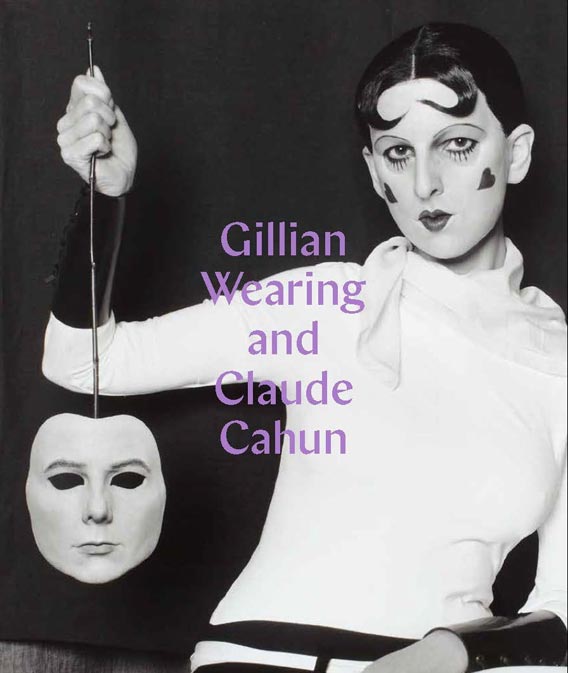 This book draws together for the first time the self-­‐portraits of French Surrealist artist Claude Cahun (1894–1954) and British contemporary artist Gillian Wearing (b.1963). Although they lived almost one hundred years apart, their work shares similar themes: gender, identity, masquerade and performance. Beginning with a visit to Jersey, where Cahun lived and worked until her death, and where the Cahun archive is housed, Wearing’s journey of discovery is examined in this beautiful book.

Claude Cahun and Gillian Wearing came from different backgrounds and were living in different times – about a century apart. Cahun, along with her contemporaries André Breton and Man Ray, belonged to the French Surrealist movement although her work was rarely exhibited during her lifetime. Together with her female partner, the artist and stage designer Marcel Moore, Cahun was imprisoned in German-­‐occupied Jersey during the Second World War as a result of her role in the French Resistance. Wearing trained at Goldsmiths and became an established artist in the 1990s, winning the Turner Prize in 1997. She has exhibited extensively in the UK, including at the Whitechapel Gallery, and overseas, most recently at the IVAM in Valencia. Despite their different backgrounds, obvious parallels can be drawn between the artists: they share a fascination with identity and gender, which is played out through performance, and both use masquerade and backdrops to create elaborate mis-­‐en-­‐scène. Wearing has referenced Cahun overtly in the past: Me as Cahun holding a mask on my face is a reconstruction of Cahun’s self-­‐portrait of 1927, and forms the starting point of this exhibition. In this book, Sarah Howgate, who has worked closely with Wearing, examines the self-­‐portrait work of both artists, investigating how the cultural, historical, political and personal context affects their interpretation of similar themes. The book includes reproductions of over 100 key works, presented in thematic sections including Transformation, Performance, Masquerade and Surrealism, accompanied by a commentary. Also featured are new works by Wearing, one of which a ‘collaboration’ (of sorts) with Cahun. The book also includes an interview with Wearing and an illuminating essay on Cahun’s self-­‐portraits by writer and curator Dawn Ades.

Sarah Howgate is Contemporary Curator at the National Portrait Gallery, London. She curated Lucian Freud Portraits in 2012, David Hockney Portraits in 2006 and is co-­‐author of 21st-­‐Century Portraits (2013) and The Portrait Now (2006).

Dawn Ades is a Fellow of the British Academy, a former trustee of Tate, Professor of the History of Art at the Royal Academy and was awarded a CBE in 2013 for her services to art history. Her critically acclaimed exhibitions and books include Art