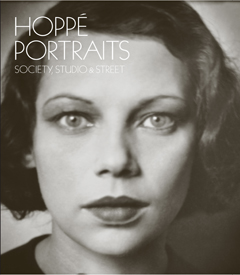 Phillip Prodger and Terence Pepper
E.O. Hoppé (1878–1972) was one of the most important and influential photographers of the first half of the twentieth century on both sides of the Atlantic. Featuring previously unpublished work, Hoppé Portraits establishes Hoppé as a great figure in the history of photographic portraiture through a rich selection of strikingly modernist portraits, as well as early photojournalist studies.

Less well known are his sensitive studies of ordinary people – such as cleaners, maids, and street vendors – that Hoppé made on location as well as in his London studio from the 1920s onwards. His photo-stories of the early 1930s were taken for the new pictureled reportage magazines, such as Weekly Illustrated. These masterful observations had a major impact on later photographers and predate the growth of photojournalism during and after the Second World War.

Following extensive conservation and organisation, the Hoppé photographic archive has been recently reunited with letters and biographical documents held by his estate. This important survey showcases 150 of Hoppé’s remarkable portraits, including many previously unpublished photographs as well as new research into his life and work.