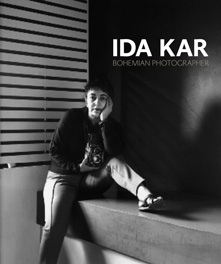 Clare Freestone and Karen Wright
A pioneering woman photographer, Ida Kar is a key figure in photographic history. She played a crucial role in encouraging the acceptance of photography as a fine art when, in 1960, she became the first photographer to be honoured with a major retrospective in London. Featuring new archive material, this reappraisal provides a valuable record of the artists and writers documented by Kar over three decades.

‘Miss Kar is one of the most distinguished and gifted photographers in England.’ Bryan Robertson, Whitechapel Gallery, 1959

Ida Kar: Bohemian Photographer charts Kar’s life (1908–74) and career from her first
studio in Cairo in the late 1930s to her move to London in 1945, where she was
introduced to the British art world through the family of Jacob Epstein and her husband Victor Musgrave. Her first solo exhibition in London, Forty Artists from London and Paris, at Musgrave’s Gallery One in 1954, included perceptive and sympathetic studies of the artists Stanley Spencer, Tsugouharu Foujita, Alberto Giacometti, Man Ray and Le Corbusier.

Fully illustrated throughout and featuring previously unseen archive material, this beautiful book shows Kar’s work from the 1950s, which led to her 1960 Whitechapel retrospective. It includes literary subjects such as Iris Murdoch, Doris Lessing, Colin MacInnes and T.S. Eliot, and portraits of Jean-Paul Sartre, André Breton and Georges Braque taken during visits to Europe. Her later work includes the photo-essay Le Quartier St Ives (Tatler, 26 July 1961), featuring Patrick Heron, Peter Lanyon, Barbara Hepworth and Terry Frost, and her documentary portraits of Soho bohemia in the 1950s and early 1960s, including coffee bars, art galleries and protests. Kar’s portrait of Fidel Castro in Cuba of 1964, demonstrates her political interests and her engagement in promoting her work.

Clare Freestone is Associate Curator of Photographs at the National Portrait Gallery,
London. She has curated numerous displays including Private View: British Pop and the 1960s Art Scene (2007) and Eamon McCabe: Artists and their Studios (2008).
Karen Wright is a writer and curator and the co-founder of Modern Painters magazine. She is based in London and currently works for Phillips de Pury auction house.