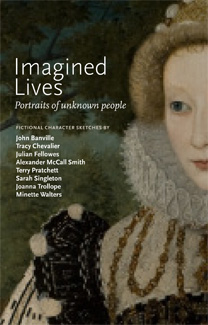 Over the last five centuries the identities of the people whose portraits are featured in this book have been either lost or mistaken. Who are these men and women, why were they painted, and why do they now find themselves in the National Portrait Gallery? To complement recent research into the identities of mystery sitters in its Collection, the Gallery has invited eight acclaimed authors to write character sketches inspired by these enigmatic portraits.

In ‘Rosy’, Tracy Chevalier writes of a handsome young man with a flushed complexion as the object of homosexual desire. Minette Walters writes a poignant letter from a despairing wife. Alexander McCall Smith tells of merchant’s daughter engaged as a body double for Mary, Queen of Scots. Julian Fellowes has created a biography of a resourceful woman whose husband was executed during Henry VIII’s reign.

Sarah Singleton relates the adventures of a spice merchant and amateur musician struggling to make his way in the world, despite his illegitimate status. Joanna Trollope tells a touching tale about a marriage proposal told in the form of a letter from the sitter’s intended bride. By contrast, the fantasy writer Terry Pratchett has written an amusing tale about an explorer who presented Elizabeth I with a skunk. And John Banville has seen, in the features of a man on his deathbed, the face of an admired officer serving with Cromwell’s New Model Army.

These short, fictional narratives build brilliantly on what can be seen in each portrait, thereby providing a new and entertaining way of looking at these intriguing images.

John Banville is a novelist who won the Man Booker Prize for The Sea (2005).
Tracy Chevalier is a historical novelist best known for Girl with a Pearl Earring.
Julian Fellowes is a novelist, screenwriter and actor. Most famous for his screenplay for Gosford Park and more recently the hugely popular Downton Abbey TV series.
Alexander McCall Smith is the acclaimed author of the No.1 Ladies’ Detective Agency series.
Terry Pratchett has sold more than 55 million copies of his science-fiction and fantasy novels worldwide. He was the bestselling UK author of the 1990s.
Sarah Singleton is an author of young adult fantasy fiction who won the Booktrust Teenage Prize for her novel Century in 2005.
Joanna Trollope is the author of eleven bestselling novels, several of which have been adapted for television.
Minette Walters is the award-winning author of thirteen crime novels, including The Ice House and The Sculptress