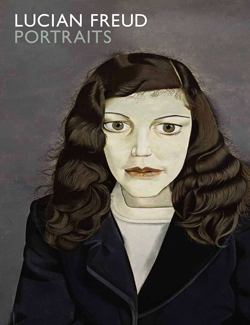 Sarah Howgate Essay and interviews with Lucian Freud by Michael Auping With a contribution by John Richardson
Lucian Freud was one of the world’s greatest realist painters. This new, authoritative survey of Freud’s portraits and figure paintings explores his work across seven decades, from the early 1940s to his death in 2011. The book features over 130 paintings, drawings and etchings selected in close collaboration with the artist.

‘Everything is autobiographical and everything is a portrait, even if it’s only a chair.’ Portraits were central to the work of Lucian Freud. Working only from life, the artist claimed ‘I could never put anything into a picture that wasn’t actually there in front of me.’

Lucian Freud Portraits surveys his portraits and figure paintings from across his long career. Drawing together the finest portraits from public and private collections around the world, the book explores Freud’s stylistic development and technical virtuosity. A series of previously unpublished interviews conducted by Michael Auping between May 2009 and January 2011 reveal the artist’s thoughts on the complex relationship between artist and sitter, the particular challenges of painting nudes and self-portraits, and his views on other painters he admired.

Freud’s psychological portraits are often imbued with a mood of alienation. A private man, the artist’s close relationship with his sitters was played out behind the closed door of the studio. Frequently there is the sense of an emotionally charged drama unfolding, but his subjects remain elusive. Sitters represented in the book include family members, particularly his mother, Lucie, and artists such as Frank Auerbach, Francis Bacon and David Hockney. In the early 1990s Freud produced a series of monumental paintings of the performance artist Leigh Bowery and Bowery’s friend Sue Tilley, the ‘benefits supervisor’, examples of which are reproduced in this book.

Sarah Howgate, Curator of Contemporary Portraits at the National Portrait Gallery, London. Her previous exhibitions include David Hockney Portraits, a retrospective of the artist’s works at the National Portrait Gallery, London, Museum of Fine Arts, Boston and Los Angeles County Museum of Art.
Michael Auping, Chief Curator at the Modern Art Museum in Fort Worth. He is well known as a curator and scholar of Abstract Expressionism. His conversations with artists have been published as 30 Years: Interviews and Outtakes.
John Richardson, a friend of Lucian Freud and author of A Life of Picasso.