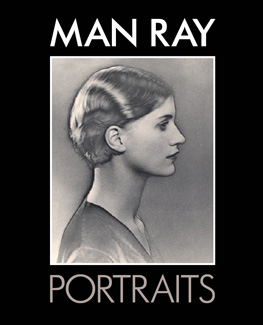 Terence Pepper
With an introduction by Marina Warner

Man Ray was one of the most inventive photographic artists of the twentieth century. His creativity and appetite for innovation and experimentation are showcased in this remarkable book, which accompanies a major exhibition and brings together more than 150 of Man Ray’s best portraits from his long and varied international career.

Man Ray (1890–1976) was born Michael (Emmanuel) Radnitzky in Philadelphia, and began signing his name as ‘Man Ray’ in 1912. He initially taught himself photography in order to reproduce his own works of art. From 1913 to 1916 Man Ray lived and worked at the artists’ colony in Ridgefield, New Jersey, where in 1915 he met the French artist Marcel Duchamp, with whom he tried to establish New York Dada.

Man Ray’s friendship with Duchamp led to his moving to Paris in 1921. There, as a contributor to the Dada and Surrealist movements, Man Ray was perfectly placed to make defining images of his contemporaries from the avant-garde. Among portraits from the early 1920s featured in this book are remarkable studies of Jean Cocteau, Peggy Guggenheim and Gertrude Stein. Also included are intimate images of Man Ray’s friends and lovers, among them Kiki de Montparnasse (Alice Prin), Lee Miller, who helped him discover the printing process of ‘solarisation’, and Ady Fidelin.

Also reproduced in Man Ray Portraits are some of the artist’s less-well-known later images, taken in 1940s Hollywood, where he met and married his last muse, Juliet Browner. His photographs of the 1950s and 1960s include such stars as Leslie Caron and Catherine Deneuve.

An essential reference guide to Man Ray’s life and work, this book includes an preface by Terence Pepper and an introduction by Marina Warner, as well as more than 200 beautifully reproduced images. A detailed, illustrated chronology sets Man Ray’s work in the context of his life.

Marina Warner is a Professor in the Department of Literature, Film and Theatre Studies at the University of Essex, and a writer of fiction, criticism and history.