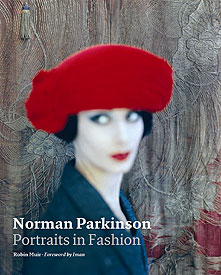 Robin Muir is a curator and writer on photography, and a former picture editor of British Vogue and the Sunday Times Magazine . He writes regularly on photography and contemporary art for the Independent on Sunday in London, Vogue and for the World of Interiors .

He has published many books on photography, most recently Unseen Vogue (2002) and its sequel, People in Vogue (2003), and has curated exhibitions for the National Portrait Gallery, London, the Victoria & Albert Museum, the Museum of London and the Yale Center for British Art, New Haven. He is the archivist for the Terence Donovan Archive.

Organised decade by decade, this impressive and timely new book, by leading curator and writer Robin Muir, examines an unrivalled photographic portfolio. Illustrated with fashion plates, portraits and contact sheets, the book includes several previously unpublished images. Many of the greatest icons of the twentieth century, as well as some of the world's most beautiful women, are revealed through Parkinson's inimitable wit and style, and through his unique eye for glamour and beauty.

Standing at 6 feet 5 inches tall, Parkinson was unable to remain unobtrusive behind the lens and instead created 'Parks', the moustachioed, ostentatiously elegant fashion photographer - as much a personality as those who sat for him. His flawless professionalism, and well-rehearsed eccentricities reassured the uneasy sitter and disarmed the experienced. 'Parks' reinvented himself for each decade of his career, from his ground-breaking spontaneous images of the 1930s, through the war years and the 'Swinging Sixties' to the exotic locations of the 1970s and 1980s. By the end of his life (he died on location in 1990) he had become a household name, the recipient of a CBE, a photographer to the Royal Family, an Honorary Fellow of the Royal Photographic Society, and the subject of a large-scale retrospective at the National Portrait Gallery, London (1981).

The book is accompanied by a small display in the Bookshop Gallery at the National Portrait Gallery. Norman Parkinson: Portraits in Fashion opens to the public on 1 September 2004 and runs until 16 January 2005. It includes around 20 of Parkinson's most compelling portraits. Public enquiries: Telephone 0207 7306 0055 (BT's Text Direct: 18001).

A complementary selling exhibition of vintage and rare prints from the 40's to the 80's will be held at Hamiltons Gallery, London from 15 September to 9 October 2004.