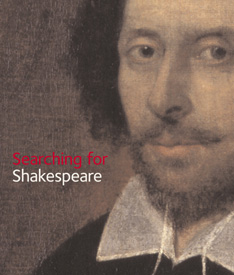 Marcia Pointon is Emeritus Professor at the University of Manchester and Honorary Research Fellow at the Courtauld Institute of Art.

James Shapiro is a Professor at Columbia University. His books include Rival Playwrights: Marlowe, Jonson, Shakespeare , Shakespeare and the Jews and 1599: A Year in the Life of William Shakespeare.

Stanley Wells is Chairman of the Trustees of the Shakespeare Birthplace Trust and Emeritus Professor on Shakespeare Studies at Birmingham University.

In 1856 the newly founded National Portrait Gallery was presented with a compelling painting of William Shakespeare, known as the Chandos portrait. Yet whether it represents Shakespeare remains a matter of intense debate. For the first time this book looks at six contested portraits of the playwright and examines their authenticity.

With new scientific evidence - including X-ray, infrared and ultraviolet examination, macro and micro photography and paint sampling - Searching for Shakespeare is an impressive and perceptive contribution to historical, cultural and literary studies. Together the authors Professor Stanley Wells and Professor James Shapiro piece together Shakespeare's personal and professional life, while Curator Tarnya Cooper explores contemporary understanding of portraiture and Shakespeare's interest in the visual arts. In a thought-provoking essay, Professor Marcia Pointon also looks at the afterlife of Shakespeare's image and how this has become an icon for Englishness since his death.

Richly illustrated with portraits, costumes, manuscripts and maps, this book provides fascinating insights into the life of Shakespeare, as well as into the lives of his fellow actors, entertainers and playwrights, and of his patrons and audiences.

Published to accompany a major exhibition at the National Portrait Gallery from 2 March to 29 May 2006, Yale Center for British Art, New Haven from 24 June to September 2006.