Speak its Name! Quotations by and about gay men and women 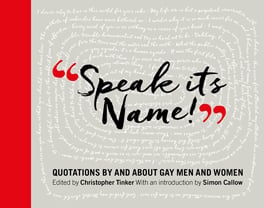 Edited by Christopher Tinker
With an introduction by Simon Callow

A collection of moving, amusing and inspirational quotations by and about prominent gay, lesbian, bisexual and transgender people, from Oscar Wilde to Tom Daley, Radclyffe Hall to Sandi Toksvig, illustrated with images from the National Portrait Gallery, London.

This collection of quotations by and about gay people is a celebration of the advances in LGBT rights in the UK over the last half-century and a demonstration of the battle against oppression and prejudice that led to them. A diverse range of people from the worlds of entertainment, sport, fashion, business, science, politics and the arts share their thoughts on coming out, equality, homophobia, love, sex, promiscuity, fidelity, bullying, labels and marriage.

Christopher Tinker is the Managing Editor at the National Portrait Gallery, London, where he has edited Vogue 100: A Century of Style (2016), David Bailey’s Stardust (2014) and Lucian Freud Portraits (2012). Before joining the Gallery he spent twelve years at BBC Books, where he edited Jeremy Paxman’s The Victorians (2009), Jonathan Dimbleby’s Russia (2008) and commissioned The Wonderful World of Albert Kahn (2008), a collection of early colour photographs.