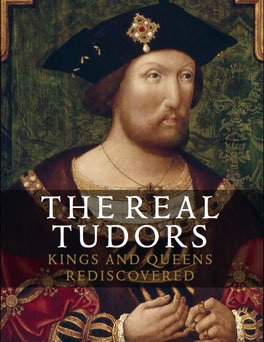 This fascinating introduction to the portraiture of the Tudor monarchs explores how all five kings and queens of this famous English dynasty were represented. The authors also reveal the intriguing findings of recent research and explain how the technical analysis of these portraits has advanced our knowledge of how and when they were created.

Who were the Tudor kings and queens and what did they really look like? Mention Henry VIII and the familiar image of the rotund, bearded fellow of Hans Holbein the Younger’s portraits immediately springs to mind – reinforced, perhaps, by memories of a monochromatic Charles Laughton wielding a chicken leg in a fanciful biopic. With Elizabeth I it’s frilly ruffs, white make-up and pink lips – in fact, just as she appears in a number of very well-known portraits held in the Collection of the National Portrait Gallery in London.
But the familiarity of these representations has overshadowed the other images of the Tudor monarchs that were produced throughout their reigns. During the sixteenth century the market for portraits grew and so the monarchs’ images multiplied as countless versions and copies of their likeness were produced to satisfy demand. Taken together, these images chart both the changing iconography of the ruler and the development of portrait painting in England.

In considering the context in which these portraits were made, the motivations of the sitters and the artists who made them, the purposes to which they were put, and the physical transformations and interventions they have undergone in the intervening five centuries, the authors present a compelling and illuminating investigation into the portraiture of the Tudor monarchs.

Tarnya Cooper is Chief Curator at the National Portrait Gallery, London. Her other publications include Searching for Shakespeare (2006), A Guide to Tudor & Jacobean Portraits (2008), Citizen Portrait – Portrait Painting and the Urban Elite, 1540–1620 (2012) and Elizabeth I & Her People (2013).

Charlotte Bolland is Project Curator for the Making Art in Tudor Britain project at the National Portrait Gallery, London.