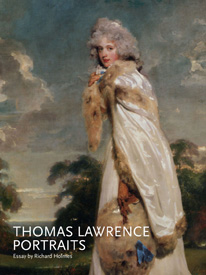 This introductory guide seeks to restore Thomas Lawrence to his rightful place in art history, presenting some of his best portraits alongside the story of his colourful career. One of the most important British portraitists of his generation, Lawrence painted George IV and Pope Pius VII as well as leading figures of the early nineteenth-century. Yet, with many major works hidden from view in private collections, his achievements have been overlooked in recent histories of art.

Thomas Lawrence (1769-1830) was the leading portraitist of the Regency period. His skill and flair as an artist catapulted him from humble beginnings - a child prodigy sketching the likenesses of customers at his father's inn - to being feted in the royal palaces of Europe.

This accessible guide is published on the occasion of a major exhibition which aims to introduce a new audience to Lawrence's work. Thirty of his best portraits - including Queen Charlotte (wife of George III), Princess Sophia (daughter of George III), the actor John Philip Kemble in character, Mirza Abul Hasan (Persian envoy to Britain), and a recently discovered early self-portrait - have been selected to demonstrate the artist's skill and unique flair for capturing his subjects. The works are drawn from international collections, as well as the National Portrait Gallery, which holds over 47 portraits by Thomas Lawrence.

This valuable introduction to Lawrence features a biographical essay charting his highly-publicised love life and aristocratic connections, as well as a lively timeline and concise captions to each featured sitter. Priced to appeal to readers who are new to the subject, as well as anyone wanting a souvenir of the exhibition and a visual guide to some of the artist's most impressive works.

Richard Holmes is a biographer specialising in the Romantic period. His latest book is the prize-winning The Age of Wonder (2008).
Lucy Peltz is the Eighteenth Century Curator and Peter Funnell is the Nineteenth Century Curator at the National Portrait Gallery, London.
Cassandra Albinson is Associate Curator of Painting and Sculpture at the Yale Center for British Art.