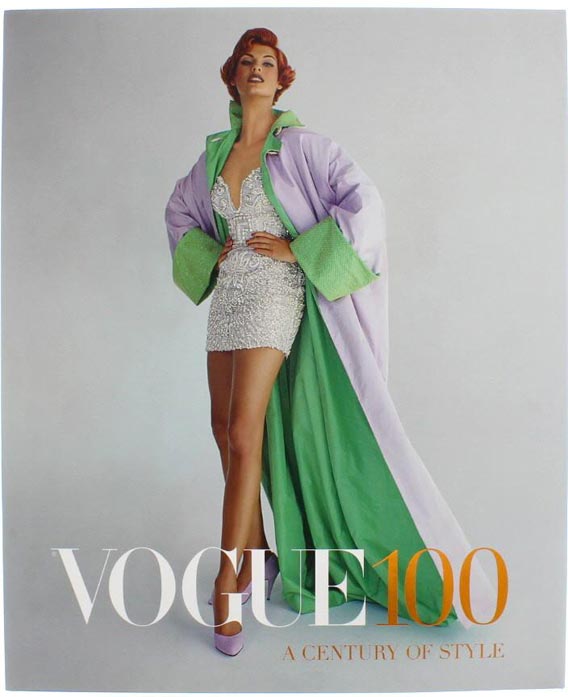 While principally a fashion magazine, Vogue has never been just that. It has assumed a central and vital role on the cultural stage, with a history that spans the most inventive decades in fashion and taste, and in the arts and society. Published to mark the magazine’s centenary, and accompanying a major exhibition, this book celebrates the twentieth century and beyond with an authoritative and discriminating eye.

In more than 2,000 issues, British Vogue magazine has acted as a cultural barometer, putting fashion in the context of the larger world in which we live – how we dress, how we entertain, what we eat, listen to, watch, who leads us, excites us and inspires us. The century’s most talented photographers, illustrators and artists have contributed to it. In Lee Miller it had, unexpectedly, its own war photographer; in Norman Parkinson, Cecil Beaton, David Bailey, Snowdon and Mario Testino the greatest portrait and fashion photographers of their
generation; and in Beaton and Irving Penn two giants of twentieth-century photography.

From 1892, American Vogue chronicled the life of beautiful people – their clothes, parties, houses and habits – and the magazine was exported for intrigued British readers. In 1916, when the First World War made transatlantic shipments impossible, its proprietor, Condé Nast, authorised a British edition. It was an immediate success, and over the following ten decades of uninterrupted publication continued to mirror its times – the austerity and optimism that followed two world wars, the ‘Swinging London’ scene of the sixties, the radical seventies, the image-conscious eighties – and in its second century remains at the cutting edge of photography and design.

Decade by decade, Vogue 100: A Century of Style celebrates the greatest moments in fashion, beauty and portrait photography. Illustrated throughout with well-known images, as well as the less familiar and recently rediscovered, the book focuses on the faces that shaped the cultural landscape: from Matisse to Bacon, Freud and Hirst, from Dietrich to Paltrow, from Fred Astaire to David Beckham, from Lady Diana Cooper to Lady Diana Spencer. It features the fashion designers who defined the century – Dior, Galliano, Balenciaga, Saint Laurent, McQueen –
and explores more broadly the changing form of the twentieth-century woman.

Robin Muir is a Contributing Editor to British Vogue. His other books include Under the Influence: John Deakin, Photography and the Lure of Soho (2014), Vogue Model: The Faces of Fashion (2013), Vogue Covers: On Fashion’s Front Page (co-author, 2009), In Camera: Snowdon and the World of British Art (2007), The World’s Most Photographed (2005), People in Vogue:
A Century of Portrait Photography (co-author, 2005), Norman Parkinson: Portraits in Fashion (2004) and David Bailey: Chasing Rainbows (2001).