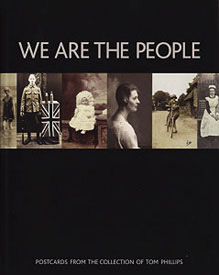 Tom Phillips is an artist, writer and composer who has exhibited internationally and who has works in both private and public collections, including the National Portrait Gallery, London. His books include The Postcard Century , A Humument and Dante's Inferno .

The exhibition is accompanied by a fully-illustrated catalogue with essays by Tom Phillips, Dr Elizabeth Edwards, Curator of Photographs at the Pitt Rivers Museum, Oxford, with a preface by James Fenton, poet and essayist. Published in March 2004, 336 pages, 900 colour illustrations.

We are the People
Photo Postcards
Tom Phillips

When, in 1902, the British Post Office first permitted writing on the reverse of postcards, rather than across the image, it heralded the beginning of the use of the picture postcard as a medium for commercial photography. Studios opened across the nation and, for the first time in history, it became possible for people from all walks of life to preserve their image for posterity, something that previously had only been available to the élite in the form of the painted portrait. Sitters could not only choose their pose, but also select from a variety of costumes, backdrops and props to create a fantasy setting and transform themselves into the figure of their imaginations. Postcard photographers also worked outside the studio, recording and celebrating friendships, families, colleagues, special occasions and events.

We are the People bring together key images from Tom Phillips' vast collection of picture postcards from the first half of the twentieth century. Categorised by theme, these images provide not only a fascinating glimpse into history but also an invaluable visual record of British society as a whole.

Entertaining, intriguing, humorous, and at times haunting, We are the People present a fresh and original approach to portraiture.
It is indispensable to the social historian, those with an interest in photography and the general reader alike - and may just reveal some long-forgotten faces from the past.