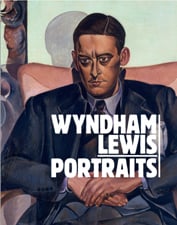 Paul Edwards is Professor of English and History of Art at Bath Spa University and has been described in the Guardian as one of 'the world's leading Lewis scholars'. His book Wyndham Lewis: Painter and Writer (Yale University Press, 2000) is the most comprehensive study of Lewis yet written.

Published to accompany the exhibition at the National Portrait Gallery, London (3 July-19 October 2008).

'Wyndham Lewis [is] the greatest portraitist of this or any other time'. Walter Sickert, 1932

This book is the first of its kind to focus exclusively on the unique talents of iconoclastic artist-writer Wyndham Lewis (1882-1957) as a portraitist. Lewis was the most important British modernist creator of the first half of the twentieth century, and as one of the 'Men of 1914' - a group which also included Ezra Pound, T.S. Eliot, James Joyce - he is credited with revolutionising 20th-century art and literature.

Broadly chronological, Wyndham Lewis Portraits begins by examining how Lewis portrayed himself using a series of multiple identities, and explores how he developed this idea in his portraits of well-known personalities such as Stephen Spender, Edith Sitwell, Virginia Woolf and G.K. Chesterton. In order to lay bare the many distinctive aspects of self-presentation that Lewis saw in each sitter, many of his supposedly definitive portraits in oils are presented in this book alongside clusters of his preparatory drawings, bringing to life his vibrant interpretations of some of the major artistic and literary figures of his time.

The high point of Lewis's career as a portraitist came in the 1930s. But when the Royal Academy rejected his 1938 portrait of T.S. Eliot, it triggered the resignation of Augustus John and a speech by Churchill. This was typical of the controversy and publicity that characterised Lewis's career. Although later in life he often alienated patrons and friends, some sitters still caught his imagination. His last major portrait of T.S. Eliot in 1949 renewed his commitment to the values of the 'Men of 1914' despite a drastic deterioration in his sight caused by the brain tumour that eventually contributed to his death in 1957.