150 Years of the Salvation Army

In 1865, William Booth and his wife Catherine founded the East London Christian Mission, an evangelical and charitable organisation that soon after became the Salvation Army. Offering a practical approach to religion, characterised by their many forms of social work and visible community presence, the Salvation Army evolved into a successful international organisation and 150 years later is also one of the greatest providers of humanitarian aid. To mark this anniversary, this slide-show includes key photographs of the Salvation Army’s founder and subsequent generations of leaders from its history. 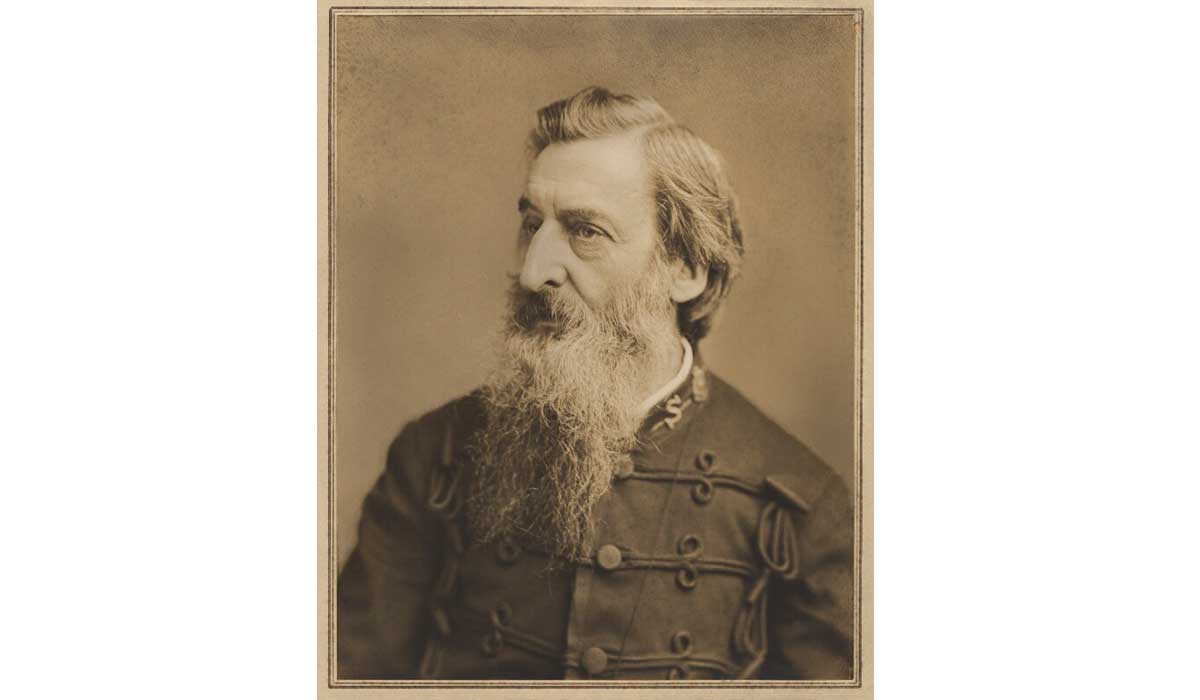 Having abandoned the Church of England and inspired by the American revivalist preachers, Booth moved to London in 1849 from his Nottingham birthplace to work as an itinerant preacher. Here, he met and married the like-minded Catherine Mumford (1829-90). By the time of this photograph, the Salvation Army was already rapidly expanding and recognised by its use of military ranks, uniforms, brass bands and flags. This vintage exhibition print shows Booth dressed in his uniform as the familiar public face of the Salvation Army. x127412 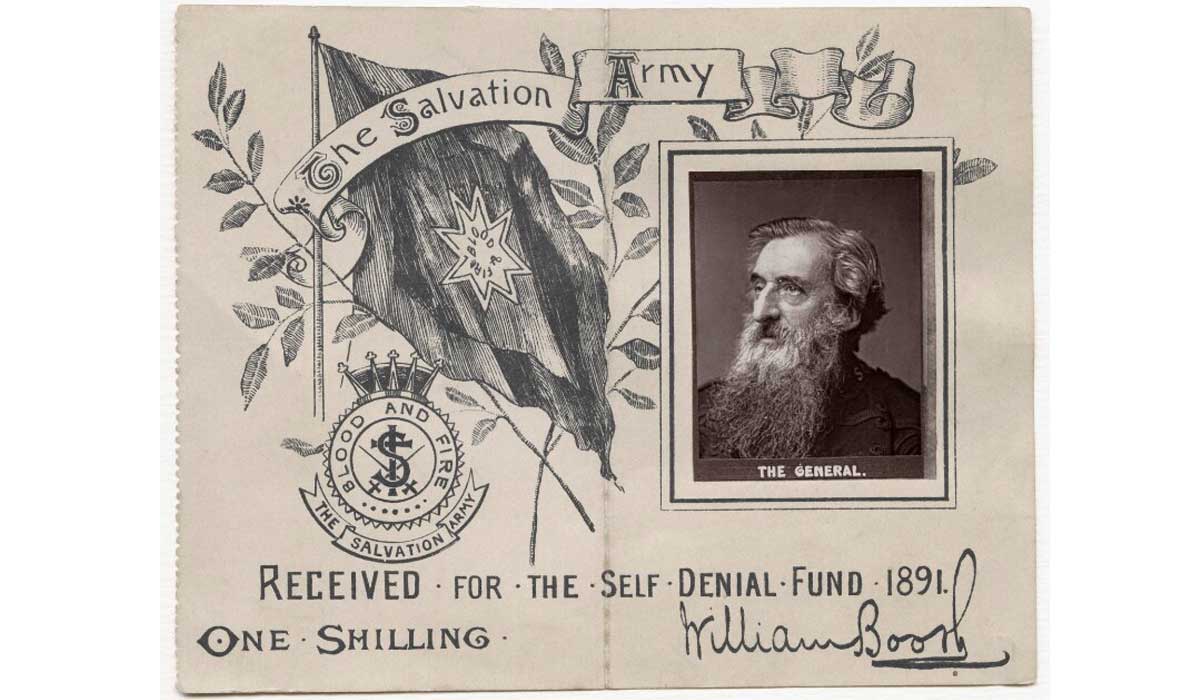 Central to the Salvation Army’s approach was the belief that evangelical work among the poor must be accompanied by well-organised social relief work. In 1890, Booth published In Darkest England and the Way Out (1890), which set out a number of these social schemes. These included soup kitchens, night shelters for the homeless, women’s refuges and Prison Gate Brigades and Booth found inventive ways to raise money to support these activities. The Self-Denial Fund was established as an annual fundraising scheme whereby individuals were encouraged to forgo spending on some item and donate the savings to the Army’s work instead. Begun in 1886, the appeal pre-empted modern fundraising methods and persists to this day. x87427 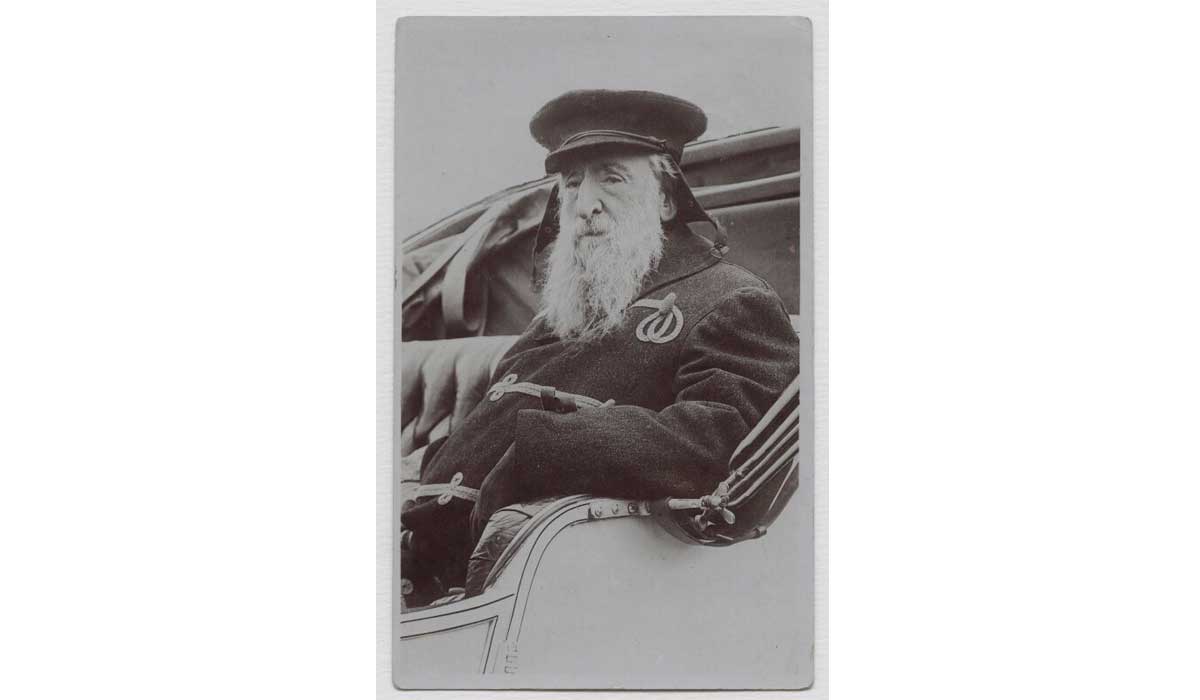 Visibility and a proactive approach to spreading his evangelical message were key for Booth and in 1904, he embarked on a nationwide tour using the newly popular motor car, stopping along the way to preach to the crowds from the open-top vehicle. By 1910, he set off on his seventh and last tour. x138004 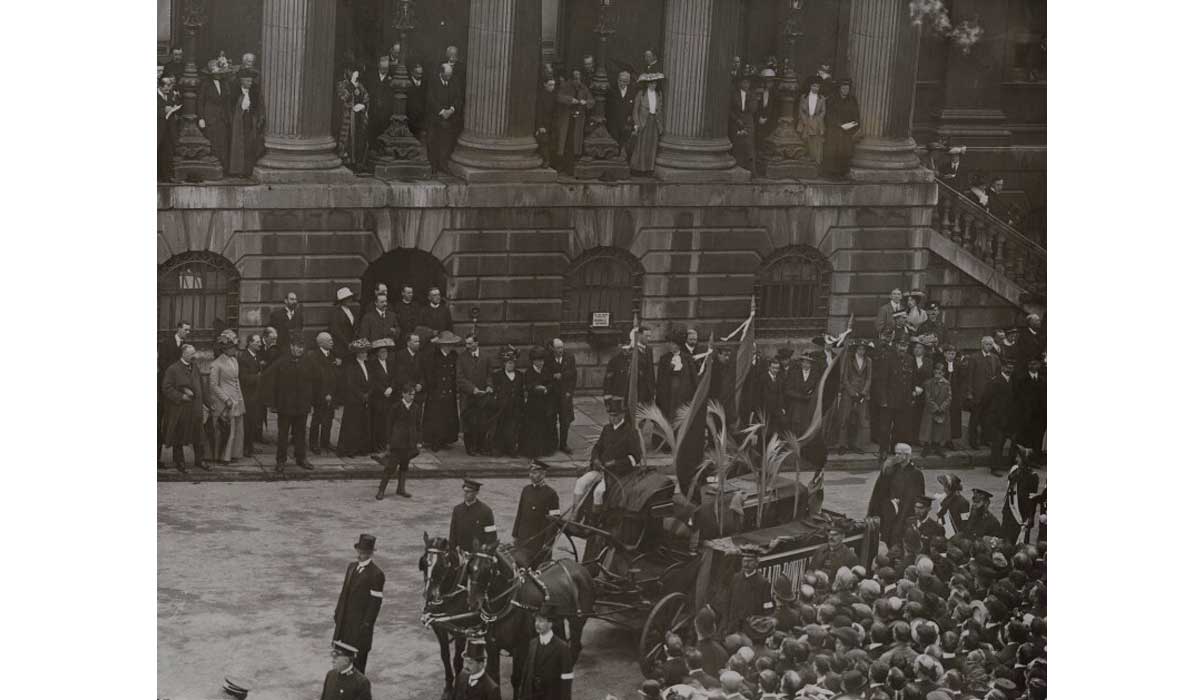 Although the Salvation Army had faced much initial opposition, public opinion regarding Booth and the Salvation Army had changed significantly in the last years of his life. When he died on 20 August 1912, 35,000 people attended his memorial service in Olympia and 5,000 Salvationists marched behind the cortege. Wreaths were sent by King George V and other heads of state. This photograph shows Booth’s horse-drawn coffin outside Mansion House in the City of London and was published in The Year 1912 Illustrated which summarised the year’s most significant events. x137203 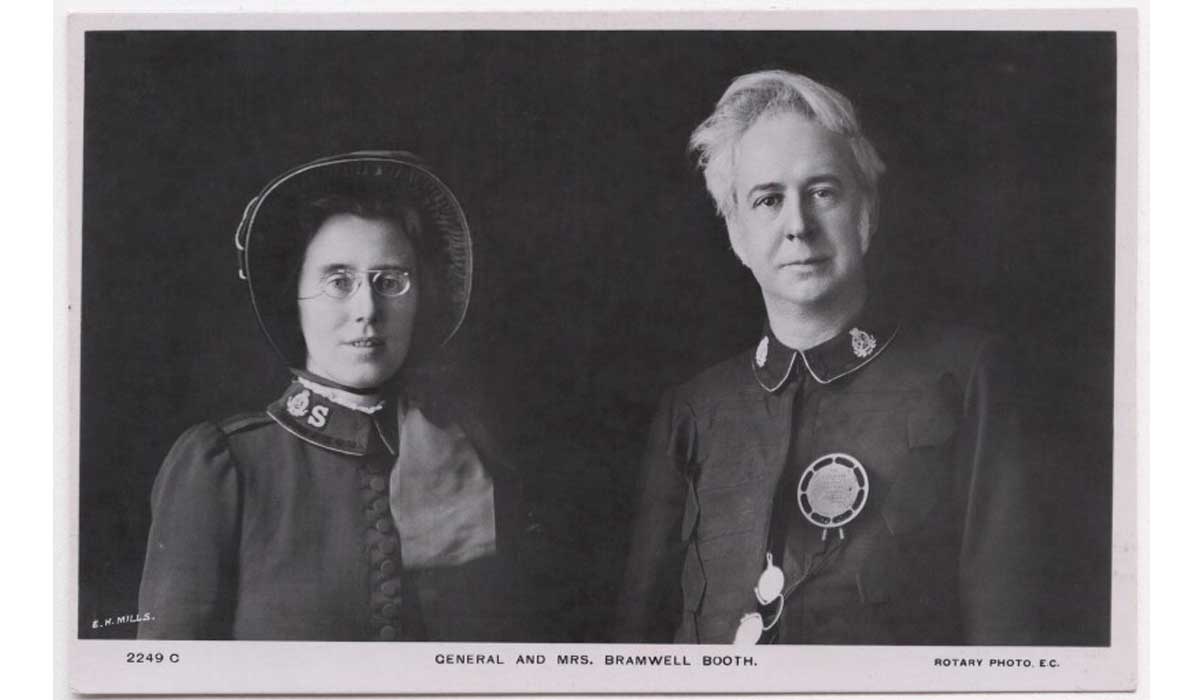 The eldest son of William Booth, Bramwell Booth was appointed General of the Salvation Army after his father’s death in 1912. He wrote extensively on social problems, travelled widely and the Army rapidly grew under his leadership, although his autocratic approach was often criticised. Booth married Florence Soper in 1882 and she was responsible for the women’s social work. She established several Army organisations including the Home League, Girl Guards and League of Mercy. A variant pose to this one was published in The Illustrated London News to mark Booth’s promotion to General and this postcard was also probably produced at the time. x197592 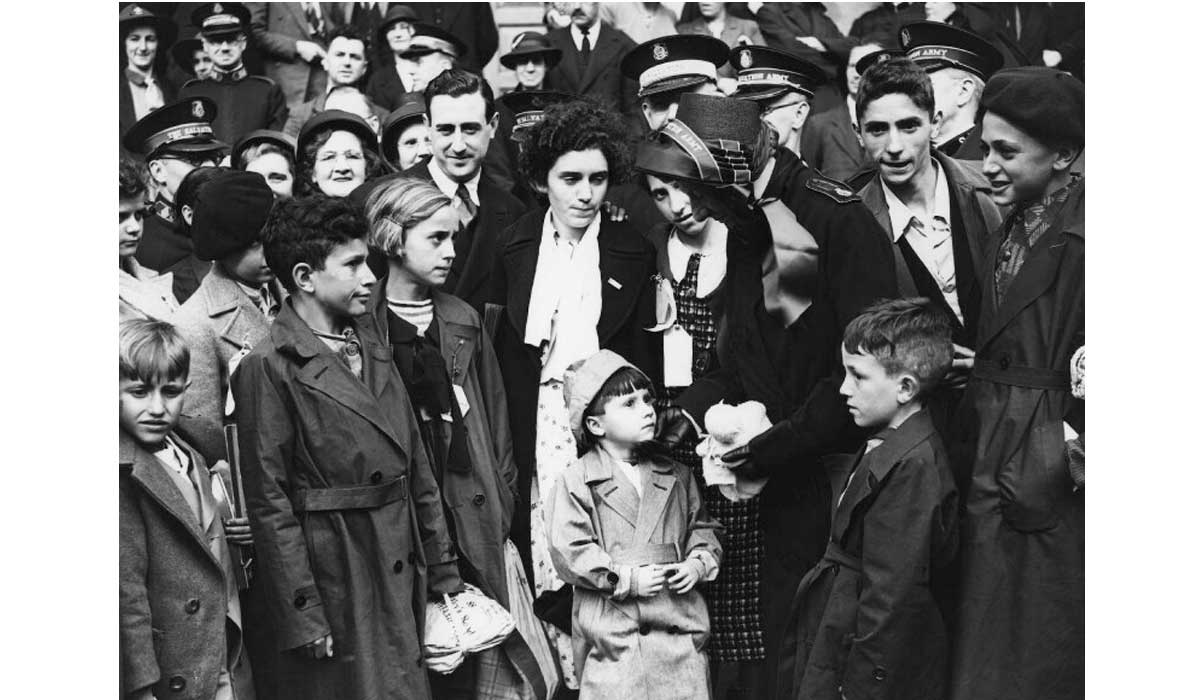 The seventh of William Booth’s eight children, Evangeline Booth was leading the Salvation Army’s work in London by her early twenties and went on to become Territorial Commander of Canada (1896-1904) and of the United States (1904-34). During the 1920s, she led constitutional change within the organisation and was elected its first female General in 1934. She appears in this press photograph greeting Basque refugee children who were evacuated from Bilbao during the Spanish civil war. Almost 4,000 children arrived at the Southampton Docks on 23 May 1937 and the Salvation Army assisted by taking in some of the displaced children. x88299 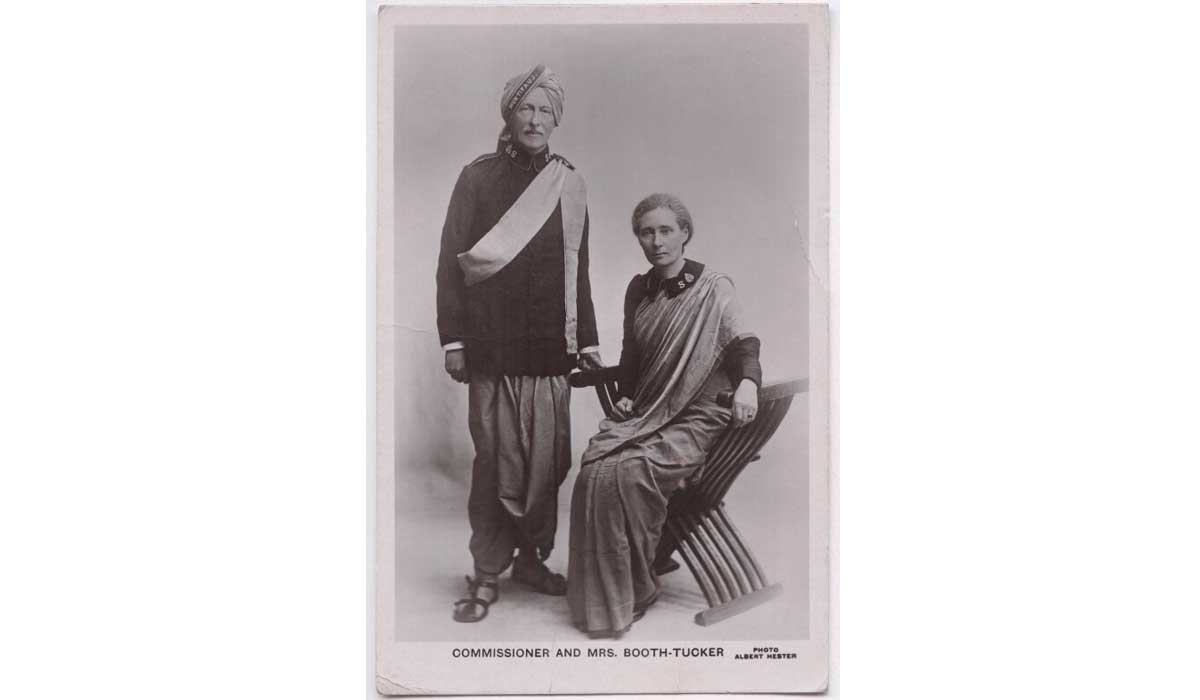 Frederick Tucker worked as a civil servant in India before joining the Salvation Army in 1881 and working for the organisation in London. In 1882, he returned to India to spread the teachings of the Salvation Army there. He lived and worked among India’s outcasts, replaced his uniform with saffron-coloured Indian robes and assumed an Indian name, exemplifying the Army’s ongoing ambition to be part of the communities within which it works. In 1888, he married William Booth’s daughter Emma and adopted the Booth family name. Together, they were joint Territorial Commanders of the United States. After his wife’s tragic death in 1903, he married Colonel Minnie Reid and the couple were posted to India where they worked among India's criminal tribes. x197603 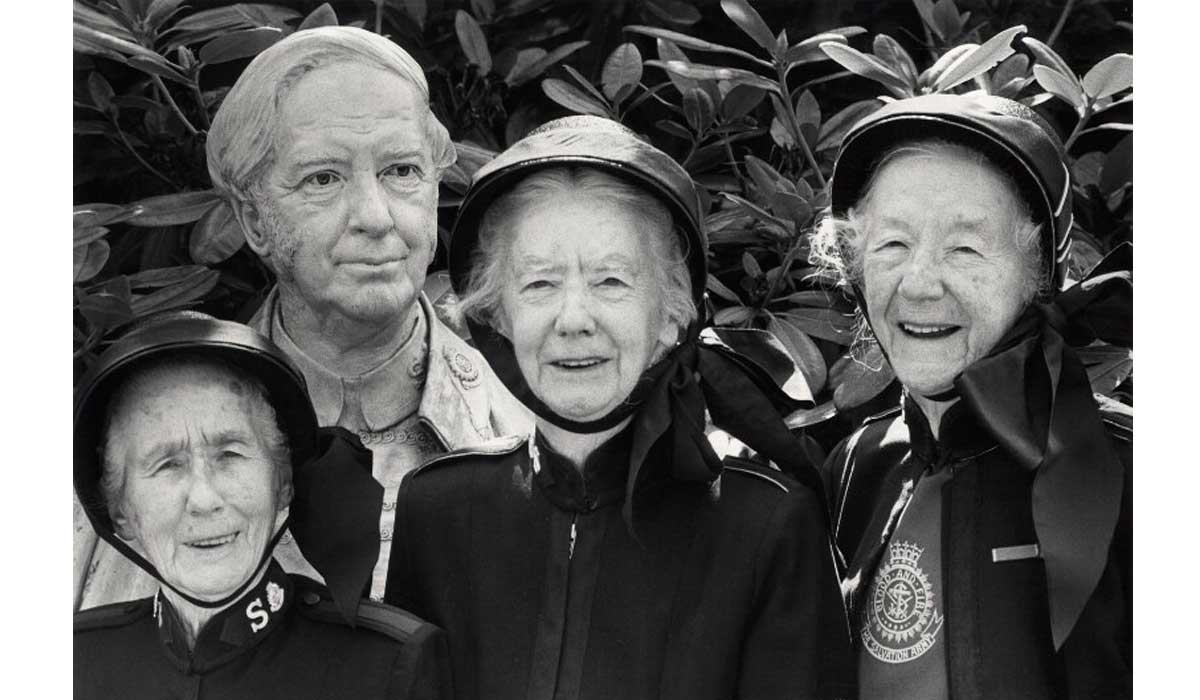 From left to right are three of Bramwell Booth’s five daughters: Olive Booth (1891-1989), Dora Booth (1893-1989) and Catherine Bramwell-Booth (1883-1987) posed beside a bust of their father. The sisters were all notable Salvationists and are pictured here in their Salvation Army uniforms and bonnets at their home North Court in Finchampstead, Berkshire. x30148 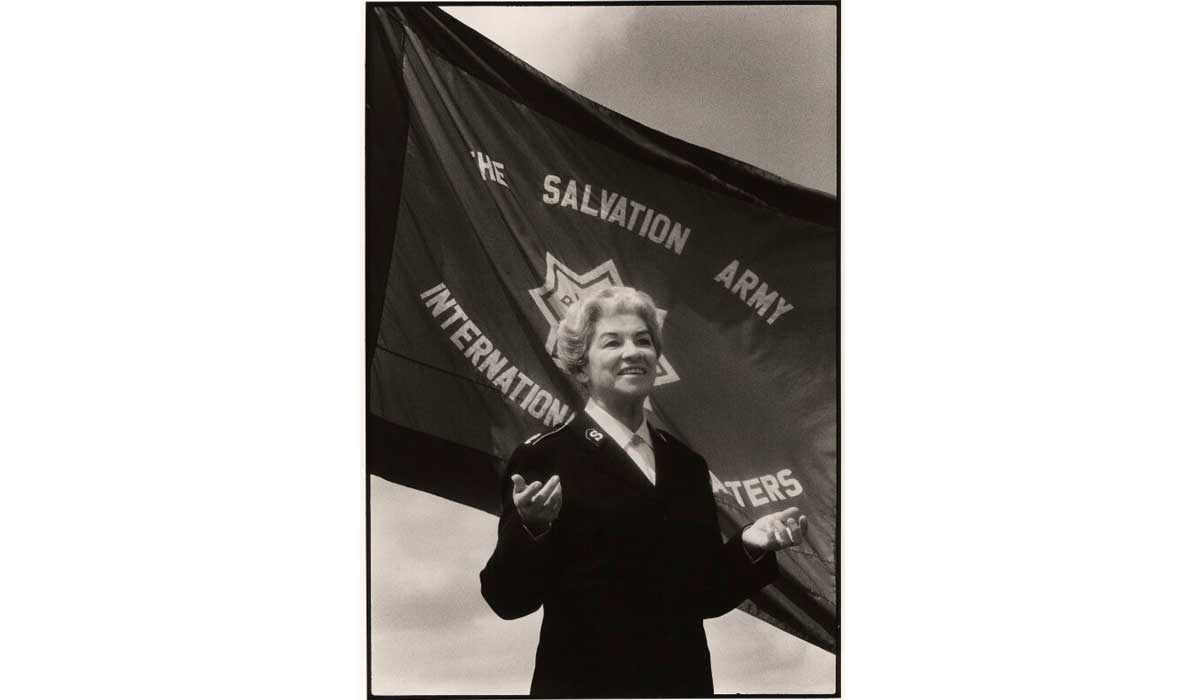 Burrows notably became the second woman to be elected General of the Salvation Army in May 1986. The daughter of Salvationists, the Australian-born Burrows became a Salvation Army officer in 1951 and served in Zimbabwe, Britain, Sri Lanka and Australia, where she assisted Prime Minister Bob Hawke in developing a national scheme to help unemployed young people. As General, she led the Army’s return to Russia and Eastern Europe after the fall of communism and was outspoken on various social and political issues, opposing South Africa’s apartheid regime and urging the Church of England to ordain women. x34102 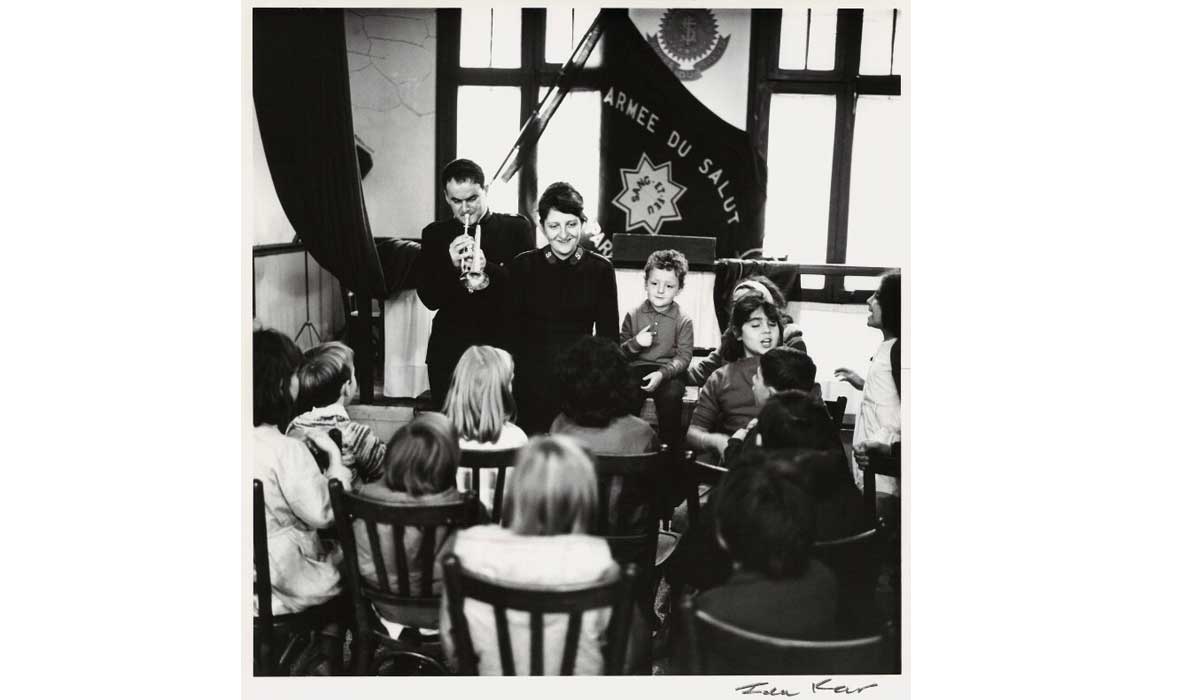 A Salvation Army gathering in Paris illustrating the recognisable uniforms, flags, brass instruments and community interaction for which the organisation is known. x135218