Marking the centenary of the armistice of the First World War, this slideshow considers the contributions of classical composers who responded to the conflict, some of whom served on the frontline. While popular music halls had boosted morale with patriotic and sentimental songs, and brought escapism during the war years, classical music also attempted to lift spirits and provided the public with an important means for remembrance and mourning, and private catharsis for those who survived. 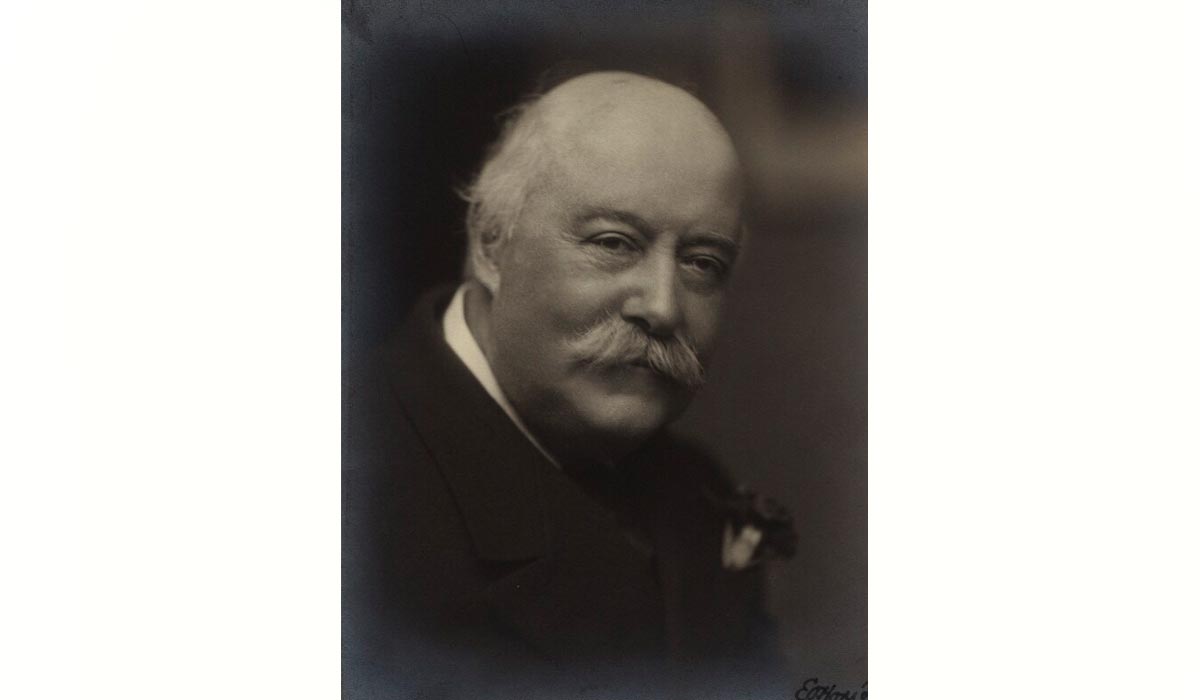 Prior to the First World War, the public mainly experienced classical music through live concerts, where German works frequently appeared, alongside those of the German-influenced British composers Sir Hubert Parry, Sir Charles Villiers Stanford and Sir Edward Elgar. Initially optimistic that Germany would not enter into conflict, Parry was devastated when war was confirmed. As Director of the Royal College of Music (1895-1918), he witnessed the new generation of composers leave for the frontline and a growing rejection of Germanic music. Parry’s symphonic poem for orchestra, From Death to Life (1914), reflected his despair. Jerusalem (formerly And Did Those Feet In Ancient Times) (1916), set to William Blake’s poem from 1804, was used by the Fight for Right Movement, which aimed to raise morale and support for the armed forces. However, Parry, who had discouraged his own students from enlisting, felt uneasy about the associated emphatic patriotism. As the feasibility of concerts decreased during the war years, Parry helped found the Music in Wartime Committee, assisting musicians financially and funding concerts. 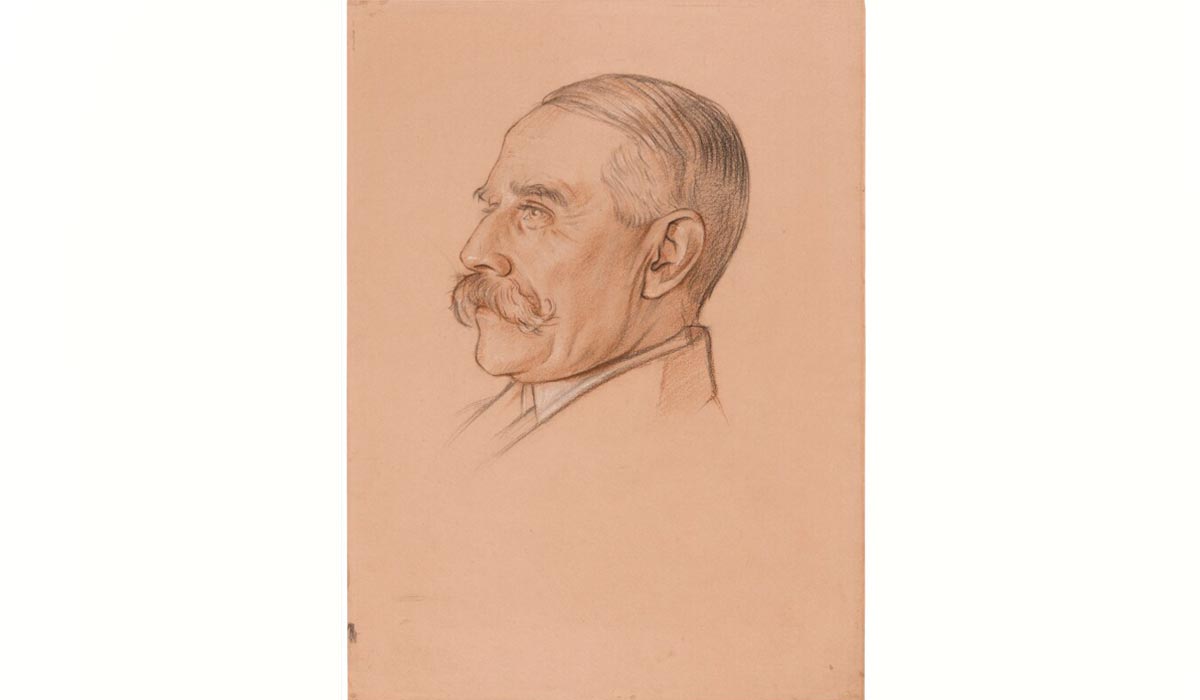 Sir Edward Elgar came to prominence in the 1890s with high-profile commissions, including the Imperial March for Queen Victoria's diamond jubilee (1897), and was knighted in 1904. Though his feelings about the war were ambivalent, he joined the special constabulary and, later, the Hampstead Volunteer Reserve. Of his wartime compositions, Carillon (1914) was written in support of Belgian resistance, Polonia (1915) was performed in aid of Polish refugees, while The Spirit of England (1915-17) was dedicated ‘to the memory of our glorious men’. In The Fringes of the Fleet (1917), Elgar wrote music for Rudyard Kipling’s verses about wartime naval subjects, and his Land of Hope and Glory (1902) was adopted as a rousing, patriotic anthem. William Rothenstein’s depiction of Elgar as an Edwardian gentleman endorses the post-war view of Elgar’s work as increasingly outmoded, as younger composers became more experimental. 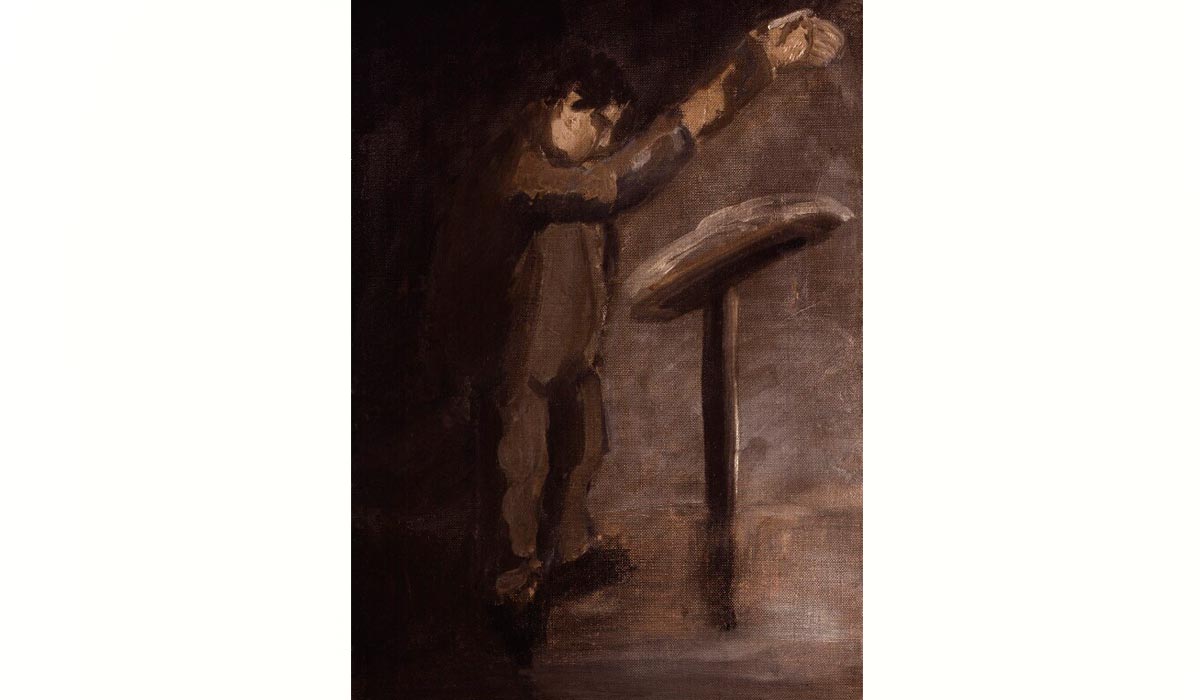 In 1914, Ralph Vaughan Williams was already a leading British composer. Aged forty-one, he could have avoided military service, but enlisted instead. Serving firstly in the Royal Army Medical Corps, he rescued wounded and dying soldiers in both France and Greece. In 1917, he joined the Royal Garrison Artillery, where the heavy gunfire is thought to have caused his deafness later in life. His evocative Pastoral Symphony (1921) was written as an elegy to fallen comrades, while his cantata Dona Nobis Pacem (1936) represents a plea for peace as fears for a new war grew. In this portrait, Vaughan’s energy, as he conducts an orchestra, is conveyed through Robin Darwin’s expressive brushstrokes and Vaughan’s seemingly exaggerated arms and hands. The muddy tones create a sombre atmosphere, hinting at the war’s indelible mark on the composer and his work. 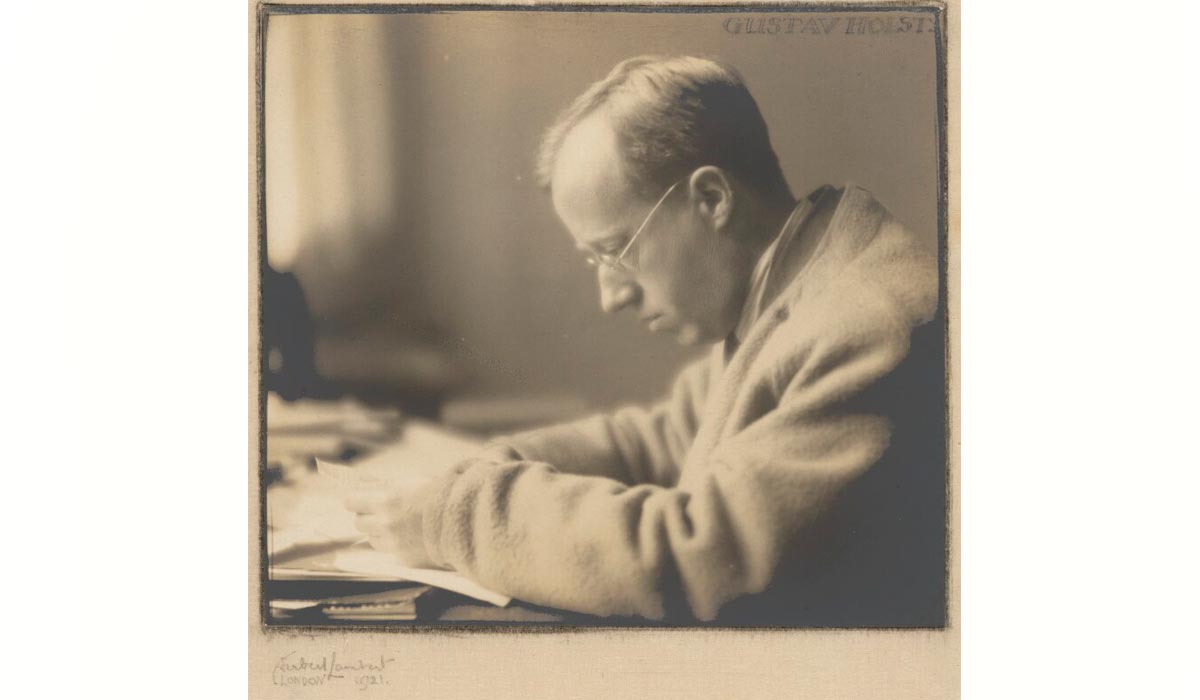 Born in Cheltenham, Gustav Holst entered the Royal College of Music in 1893 where he met Ralph Vaughan Williams, a lifelong friend and musical influence. Holst tried to enlist for military service, but was deemed unfit and rejected. In 1918, the YMCA recruited him as their musical organiser, teaching and arranging concerts for British soldiers in Salonika and Constantinople. His epic, orchestral suite The Planets (1914-16) is often linked to the war, particularly owing to its ominous, opening movement Mars, the Bringer of War. Ode to Death (1916-17) more directly mourns the futility of lives lost in the First World War, setting a poem by Walt Whitman (When Lilacs Last in the Dooryard Bloom’d, 1865) to music. Shown seated at his desk and engrossed in his papers, this photograph was published in Herbert Lambert’s book of Modern British Composers in 1923. 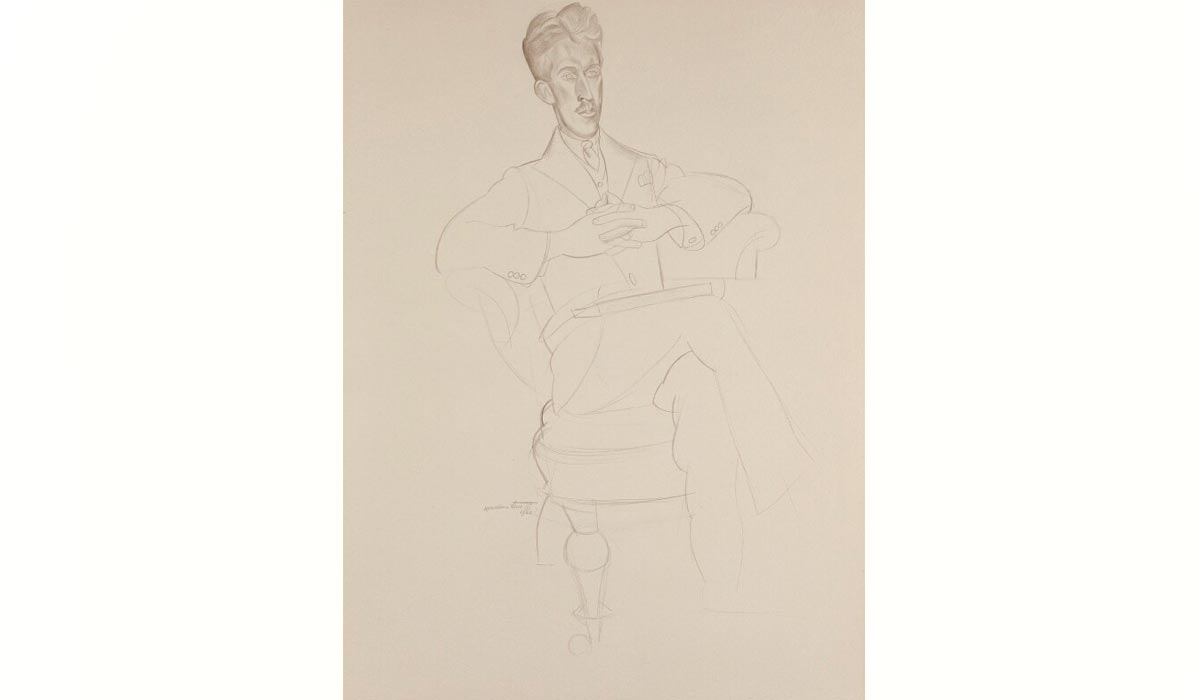 Sir Arthur Bliss left the Royal College of Music in 1914 to serve with distinction in the 13th Royal Fusiliers (1914-17) and the Grenadier Guards (1917-19). While surviving with few injuries, his traumatic experiences are revealed in his diaries, letters and autobiography, As I Remember (1970). After the war, Bliss reacted against his German-influenced teaching and experimented with innovative compositions, coming to prominence with Colour Symphony (1921-2). Wyndham Lewis designed the cover for its published score in 1924. Bliss’s choral symphony Morning Heroes (1930), set classical texts and war poetry to music. Dedicated to his brother, Kennard, and others killed in battle, Bliss identified it as a means for exorcising a recurring war-related nightmare and it is said to address his generation’s drive to fight in the war. Lewis’s dynamic sketch of his friend evokes the energy and sense of purpose Bliss felt after the war. A key figure in the Vorticist movement, Lewis served as a gunner before becoming an official war artist for the Canadians in December 1917, and then commissioned by the British War Memorials Committee. 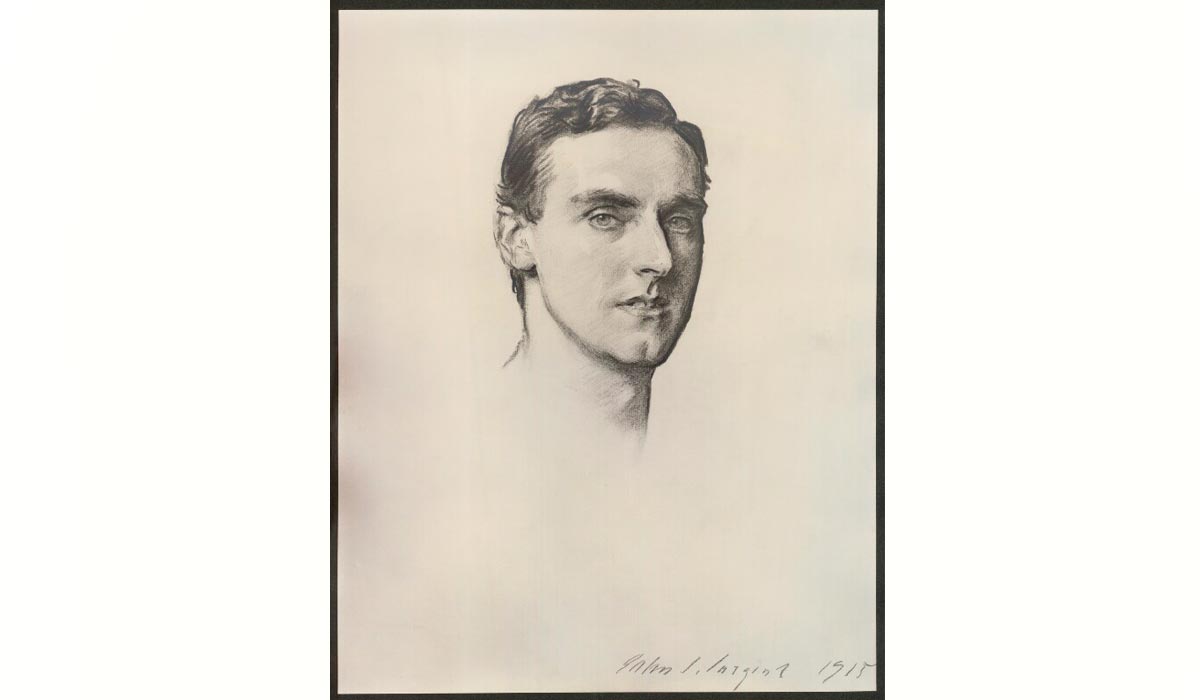 Born in Sydney, Australia, Frederick Septimus Kelly was a skilled oarsman who won an Olympic gold medal with the British rowing team in 1908. He studied piano in Frankfurt before joining the British Royal Naval division in September 1914. Serving alongside the poet Rupert Brooke, and the critic and composer William Denis Browne, Kelly was twice wounded in Gallipolli, where he wrote musical scores from his tent. His tribute to Brooke, Elegy for String Orchestra: ‘In Memoriam Rupert Brooke’ (1915), whom he helped bury on the island of Skyros, marked a profound and personal loss. Kelly was awarded the Distinguished Service Cross and reached the rank of lieutenant-commander. He was killed during the Battle of the Somme and buried in the Martinsart British Cemetery. Produced in the year before the composer’s death, John Singer Sargent’s portrait conveys Kelly’s vitality in the depiction of his sturdy neck and chiselled, determined features. A prolific and celebrated painter and muralist, renowned for his portraits of Edwardian society, Sargent travelled to the Western Front as an official war artist in 1918. 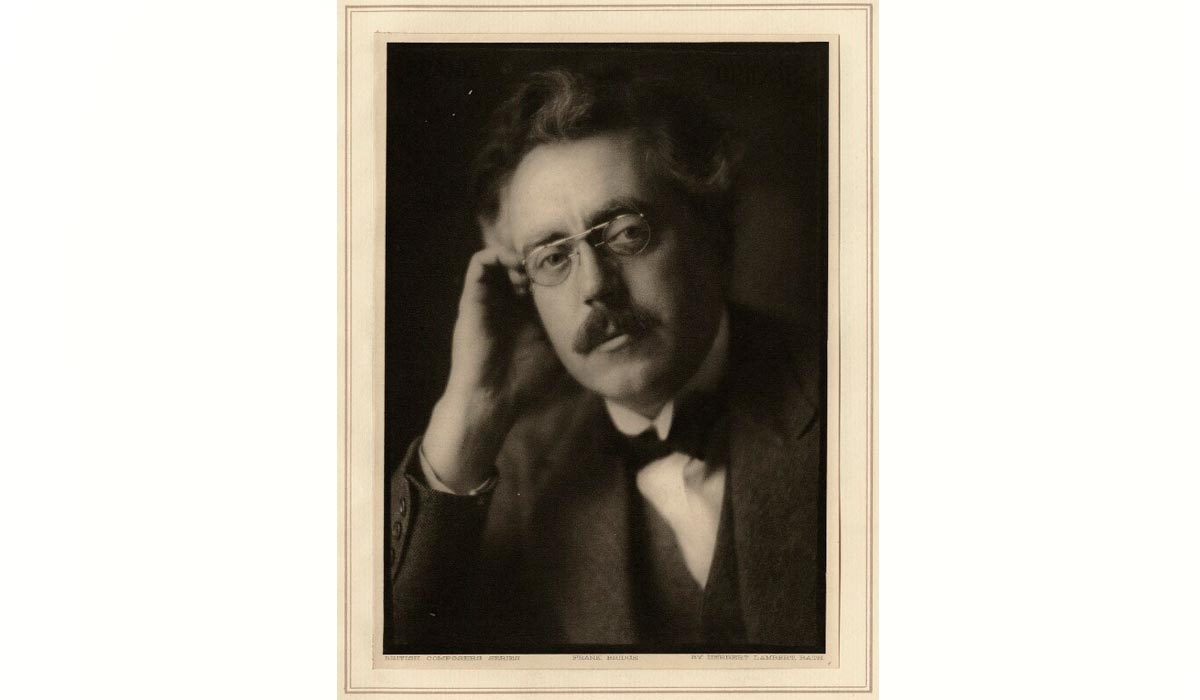 A composer, conductor and viola player, Frank Bridge was a pacifist who was deeply anguished by the First World War. Many of his friends and colleagues were killed in action, including the composer Ernest Farrar, to whom he dedicated his Piano Sonata (1921-4). Lament (for Catherine, aged 9, ‘Lusitania’ 1915) (1915) was composed in memory of a girl drowned when the passenger ship Lusitania was sunk by a German military submarine. Bridge wrote Three Improvisations for the Left Hand (1918) for the pianist Douglas Fox, who had lost his right arm in battle. In Herbert Lambert’s sympathetic portrait for his Modern British Composers series, Bridge appears gentle and thoughtful, qualities that perhaps contributed to the war’s profound influence on him. A professional portrait photographer, Lambert was also an amateur maker of musical instruments and was imprisoned as a conscientious objector during the war. 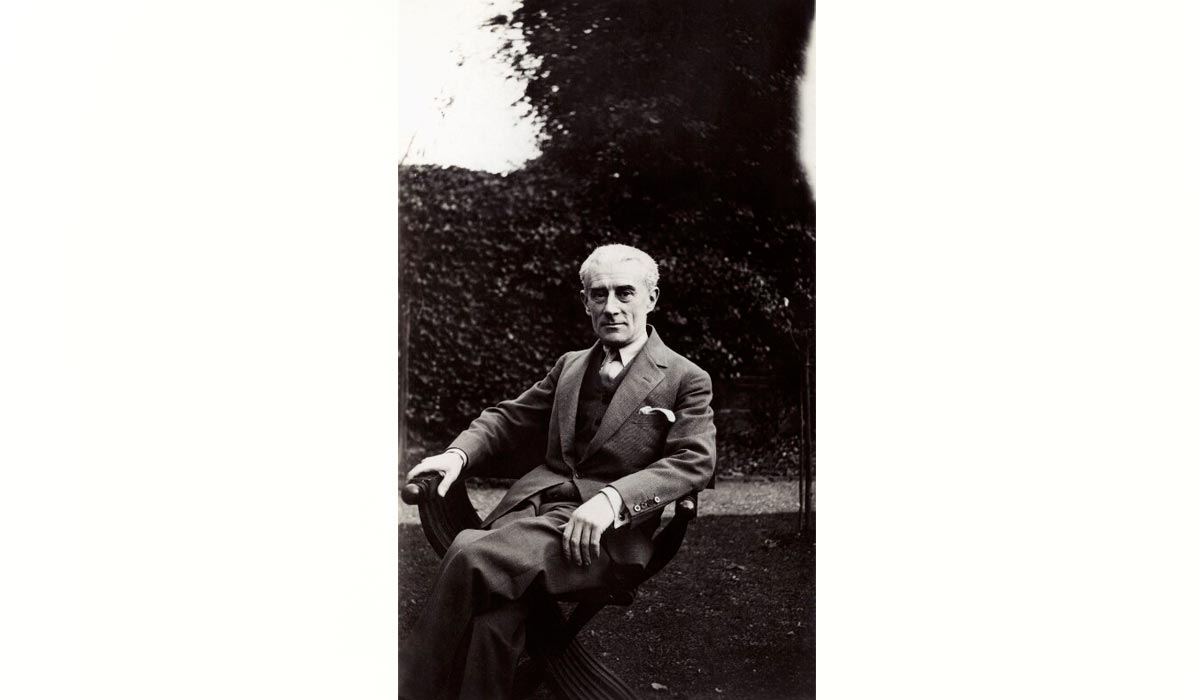 Already celebrated as one of France’s pre-eminent composers, the thirty-nine year-old Maurice Ravel was determined to enlist, initially applying to the French Air Force. He joined the Thirteenth Artillery Regiment as a lorry driver in March 1915, transporting munitions within close range of enemy gunfire. With his physical and mental health deteriorating, Ravel was provisionally discharged in June 1917. Ravel composed little during the war years, the most notable of which, Le tombeau de Couperin (1914-17), memorialised six friends killed during the war in each movement. With diminished physical and mental stamina, Ravel composed less in the years after the war and adopted a more pared back style. Photographed in the year he wrote his most famous work, Boléro (1928), Ravel sits relaxed in a garden during the interwar years. 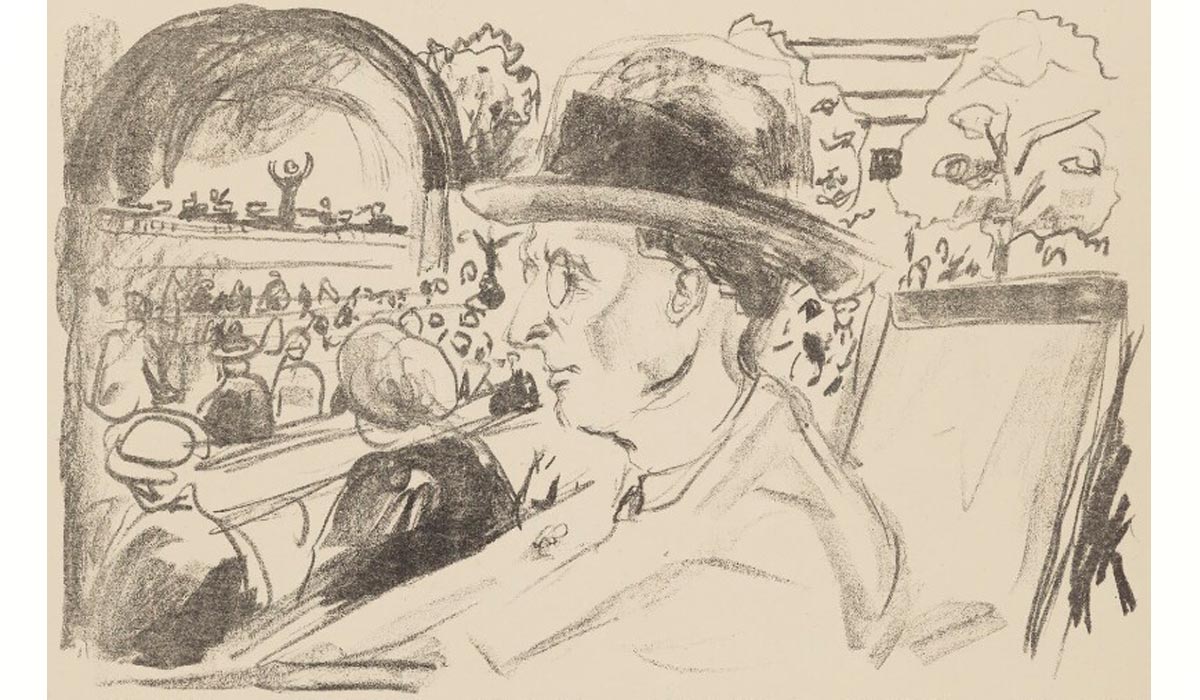 Born in Bradford, Frederick Delius spent much of his adult life outside Britain and was living in France at the start of the First World War. He returned to England to avoid the hostilities, where he continued to compose. In 1916, he completed Requiem, dedicated 'to the memory of all young Artists fallen in the war'. Despite its religiously derived title, its words were influenced by the writings of the philosophers Friedrich Nietzsche and Arthur Schopenhauer, which rejected traditional Christian values. When it was first performed in 1922, it offended its recently bereaved audience in its denial of an afterlife and, therefore, of the comforting prospect of reunion. In this briskly executed lithographic sketch, the Norwegian artist Edvard Munch portrays Delius at an outdoor concert in Wiesbaden. The pair became lifelong friends after meeting in Paris in the early 1890s. 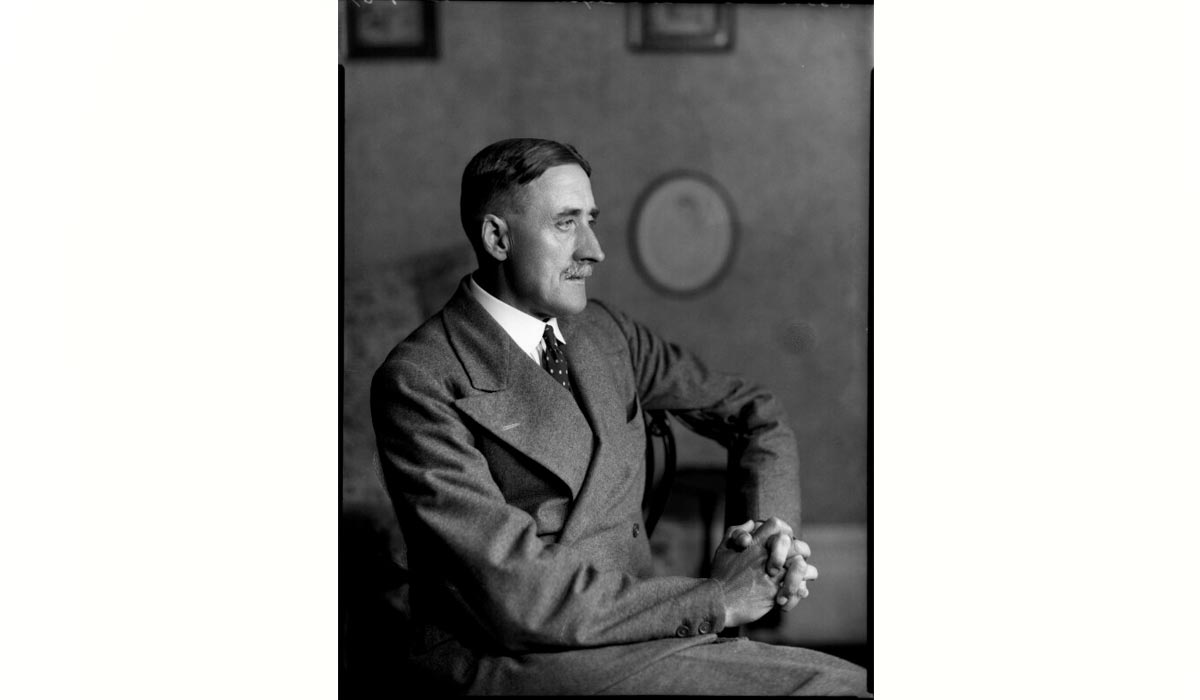 Sir George Dyson was Director of Music at the Royal Naval College in Osborne, before moving to Marlborough College in 1911. He joined the Royal Fusiliers in January 1915 and published a widely used training pamphlet on grenade warfare after finding there were no official guides available. Posted to the French frontline, he endured the difficult conditions of the trenches, yet composed a set of piano miniatures, including the Epigrams (1916, published 1920), during quieter moments. Suffering shellshock after a near miss from an exploding bomb, he was sent home in March 1916. After a long convalescence, he joined the Air Ministry as Organising Director of Music in 1918, composing a set of trumpet calls for the RAF and completing Sir Henry Walford Davies’s piano sketch for the official RAF March Past, to which he added the introspective trio section. Dyson returned to teaching after war. He is pictured, here, in the year he became Director of the Royal College of Music.