11 June 2015 marks the bicentenary of the birth of Julia Margaret Cameron (1815-79) who is celebrated as one of the most important and innovative photographers in the history of the medium. This selection from the National Portrait Gallery’s Collection highlights some of the most important and influential figures in Cameron’s life and features examples from the range of her work, including her portraits of eminent men, narrative illustrations, women, religious subjects, children and group tableaux. 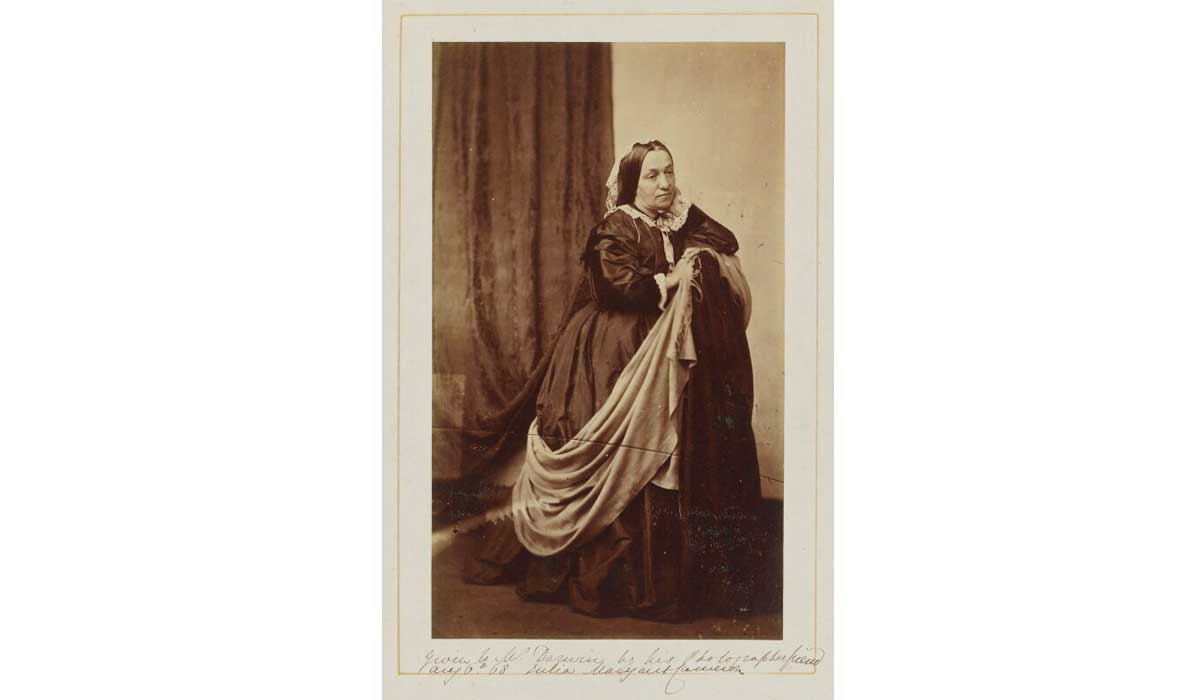 Julia Margaret Pattle was born in Calcutta, India where her father held various important legal and administrative positions. In 1838, she married Charles Hay Cameron (1795-1880) who also worked in India as a civil servant and following his retirement in 1848, the couple moved to England where their social circle grew to include many important cultural figures of the day. Cameron took up photography after being given a camera by her daughter Julia and her husband, Charles Norman, in late 1863 and a productive photographic career, spanning little more than a decade, followed. Shown dressed in her distinctive style, this photograph was given to the scientist Charles Darwin during his visit to her home ‘Dimbola’ in Freshwater on the Isle of Wight (now a museum) as the inscription on the mount indicates. During his stay, Darwin sat to Cameron (NPG P8), as did his brother Erasmus and Charles’s son Horace. - NPG P880 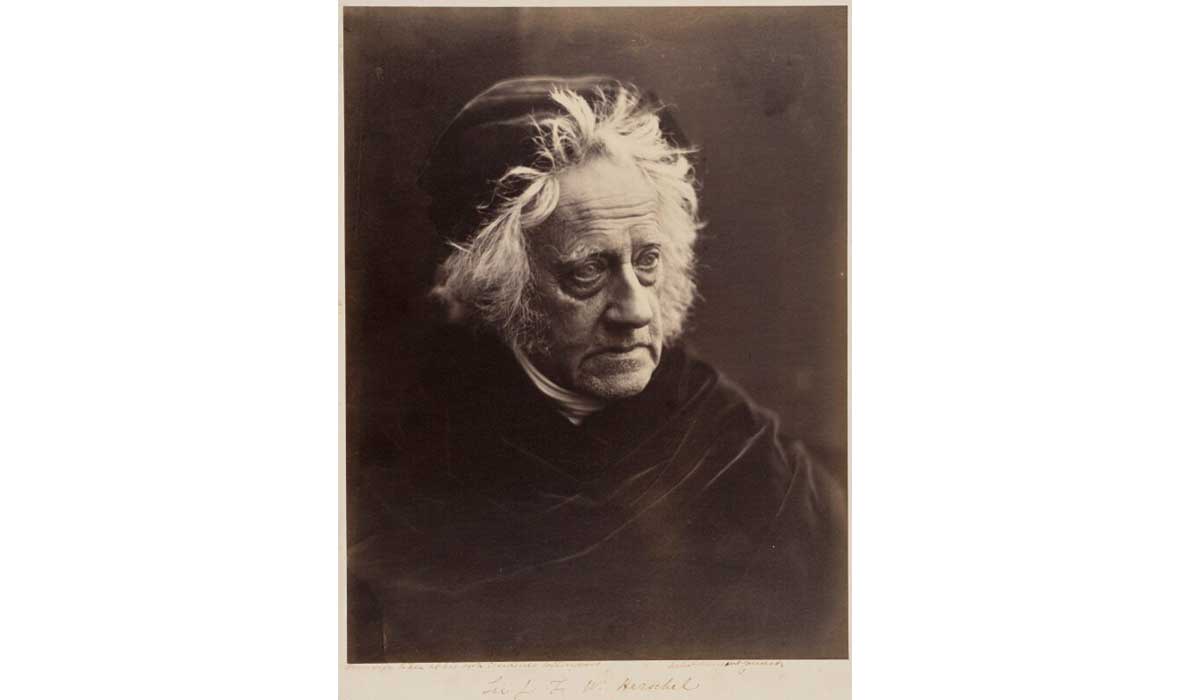 Cameron first met Herschel in South Africa in 1836 where she went to recover from illness and they became close, longstanding friends. An astronomer and physicist, Herschel was also a pioneer in the chemistry of photography. Among his many groundbreaking discoveries, he introduced ‘hypo’ as a fixing agent and coined the terms ‘photograph’, ‘negative’ and ‘positive’. Herschel introduced Cameron to the new invention of photography in 1839 and shared the results of his early experiments with her. In her autobiographical manuscript Annals of My Glass House (1874, first published 1889), Cameron remarked: ‘He was to me as a Teacher and High Priest. From my girlhood I had loved and honoured him, and it was after a friendship of 31 years’ duration that the high task of giving his portrait to the nation was allotted to me’. Four studies were made during this sitting at Herschel’s home Collingwood in Hawkhurst, Kent. - NPG P213 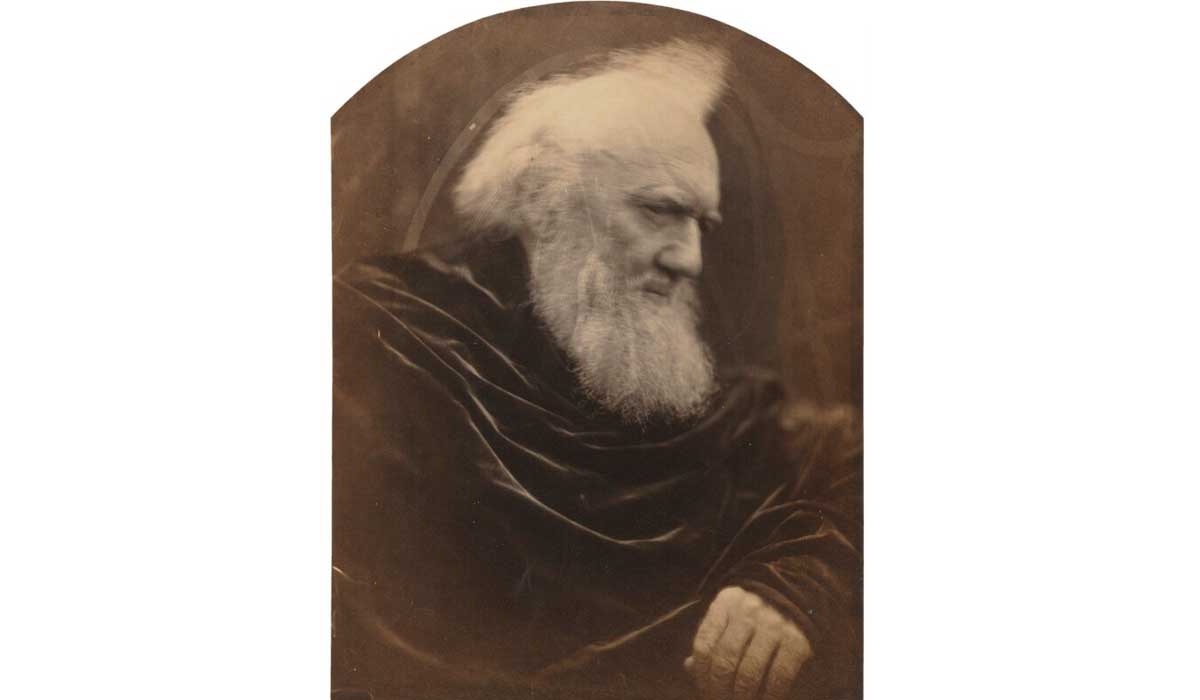 A civil servant in India, Prinsep married Cameron’s sister Sara in 1835. They moved into Little Holland House in Kensington, London in 1851 where Sara hosted weekly cultural salons attended by figures such as Alfred Tennyson, Robert Browning, Thomas Carlyle and Edward Burne-Jones, many of whom Cameron met there and persuaded to sit for her portraits. The close-up composition here, depicting the sitter’s head surrounded by a dark background, is typical for Cameron’s portraits and, while partly a result of the photographic equipment she used, illustrates her belief that grand truths were enshrined in the human face. The draped fabric around Prinsep’s body lends the portrait a timeless quality while the painterly marks around the top of his head, evoking a halo, recall religious iconography. - NPG P989 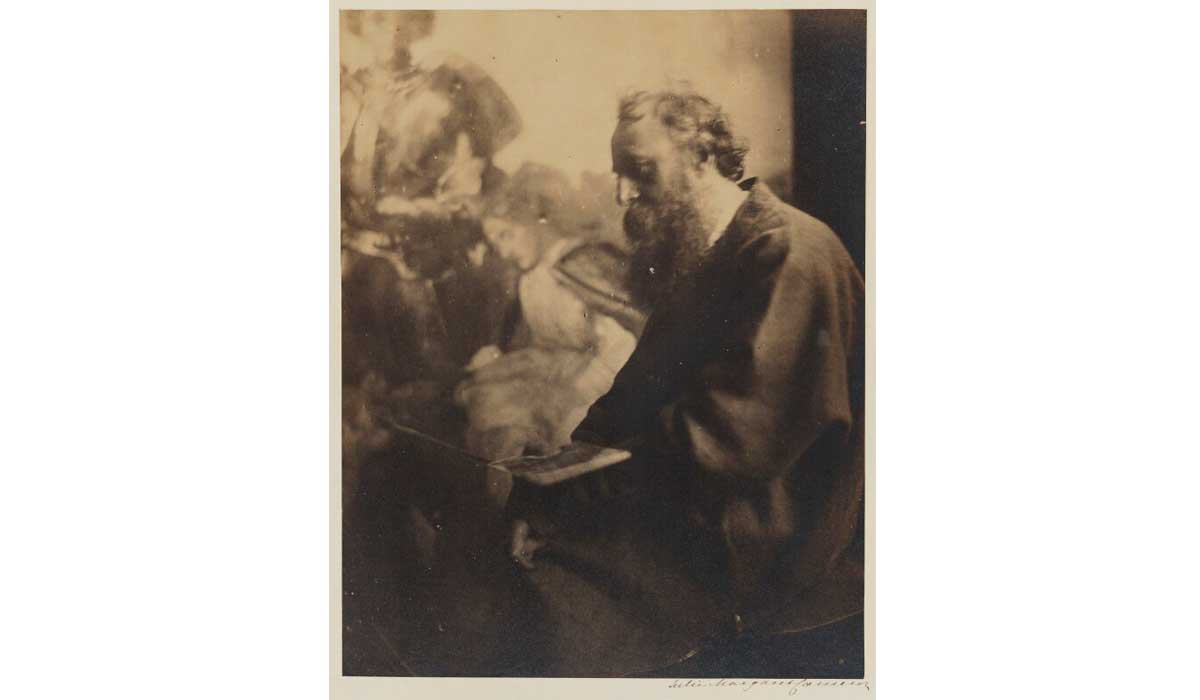 The artist Watts and Cameron were friends from at least 1851 when he first lodged with Cameron’s sister and brother-in-law at Little Holland House. Around this time, Watts painted Cameron’s portrait (NPG 5046) and when she took up photography, he was naturally a favoured, if somewhat reluctant, sitter. An important influence on Cameron, he was her artistic mentor, praising her photographic efforts and advising her on areas for improvement, as their correspondence in the National Portrait Gallery’s Collected Archives shows. His ‘Hall of Fame’ paintings, given by Watts to the National Portrait Gallery, are mirrored in Cameron’s aesthetic approach to her portraits of distinguished men. In this photograph, Cameron adopts a relatively rare compositional approach for her portraits by showing Watts in a three-quarter length pose with his allegorical painting Una and the Red Cross Knight (1869). - NPG P125 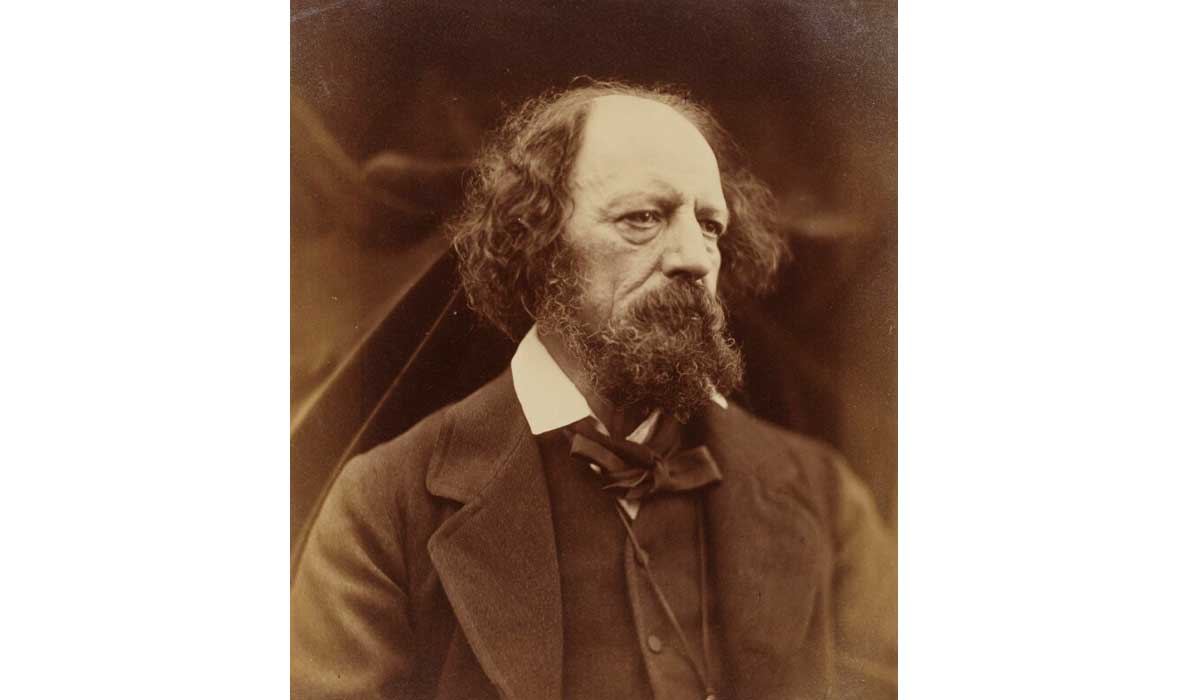 Cameron and Tennyson became close friends following an introduction by the poet Sir Henry Taylor and were later neighbours on the Isle of Wight. She photographed Tennyson on several occasions and George Frederic Watts praised her for doing ‘justice to the noble and beautiful head, the finest you will ever have before your lens.' While Cameron often depicted Tennyson theatrically in a cap and cloak, he appears here in modern dress, giving the portrait a greater directness, added to by the front-facing pose. With his face framed by his bright collar and the dark background and the folds of the background drapery emanating from behind Tennyson’s head, Cameron draws focus to the source of Tennyson’s creativity. As the most popular poet of his time, Tennyson was reluctant to the trappings of fame and complained to Cameron that her 'confounded' photographs meant that innkeepers, recognising his face, charged him double. - NPG P9 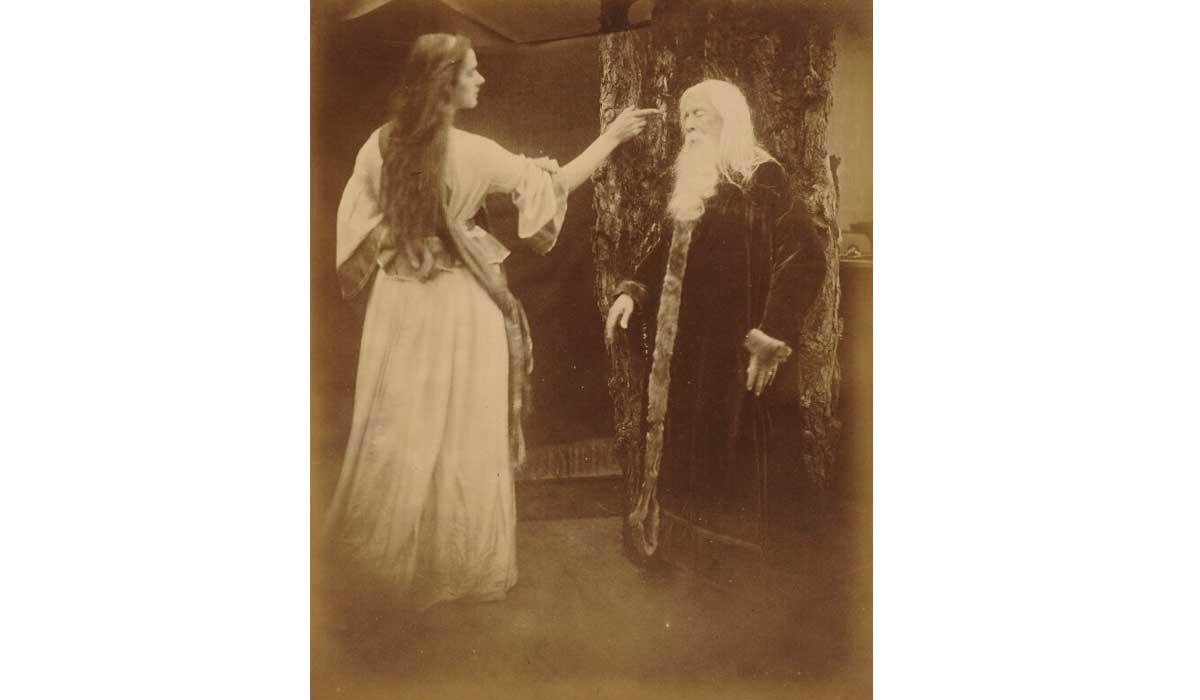 In 1874, Alfred Tennyson encouraged Cameron to illustrate a new volume of his poems, Idylls of the King, based on the medieval legends of King Arthur. Recognising the potential to publicise her work, Cameron was disappointed when the published edition reproduced only three of her images at a reduced size as woodcuts and went on to produce two further volumes that would include more of her large-format photographs. Characteristic of her hardworking and enthusiastic approach, she claimed to have taken 245 photographs to gain the first selection with which she was pleased. Thirteen of her photographs appeared in each volume and were accompanied by lithographically reproduced excerpts of Tennyson’s text written in Cameron’s hand and Tennyson’s signature. This photograph depicts Agnes Mangles as the sorceress Vivien casting a spell over the wizard Merlin, played by Cameron’s husband Charles. - NPG x18029 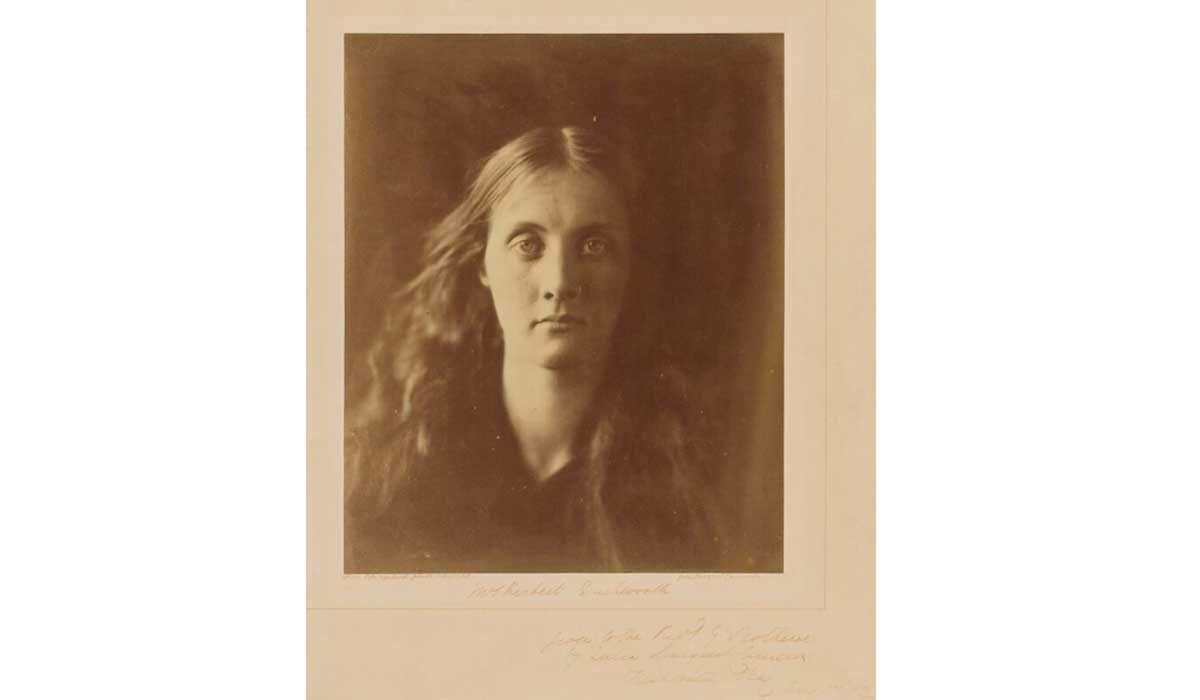 Julia Jackson was Cameron’s niece and goddaughter. A renowned beauty, she sat for many artists including George Frederic Watts and Edward Burne-Jones. This photograph was taken in the year she married the barrister Herbert Duckworth. Duckworth died in 1870 and she subsequently married Sir Leslie Stephen, editor of The Dictionary of National Biography. Their children included the writer Virginia Woolf who published a selection of Cameron’s photographs in Victorian Photographs of Famous Men & Women (1926), which she produced with Roger Fry. There are more than fifty known portraits of Jackson by Cameron and she is one of the few women who Cameron consistently portrayed as herself. Jackson’s loose, flowing hair here is reminiscent of Pre-Raphaelite imagery, while her direct gaze and the dramatic lighting to one side of her face lend the portrait a powerful atmosphere. - NPG x18016 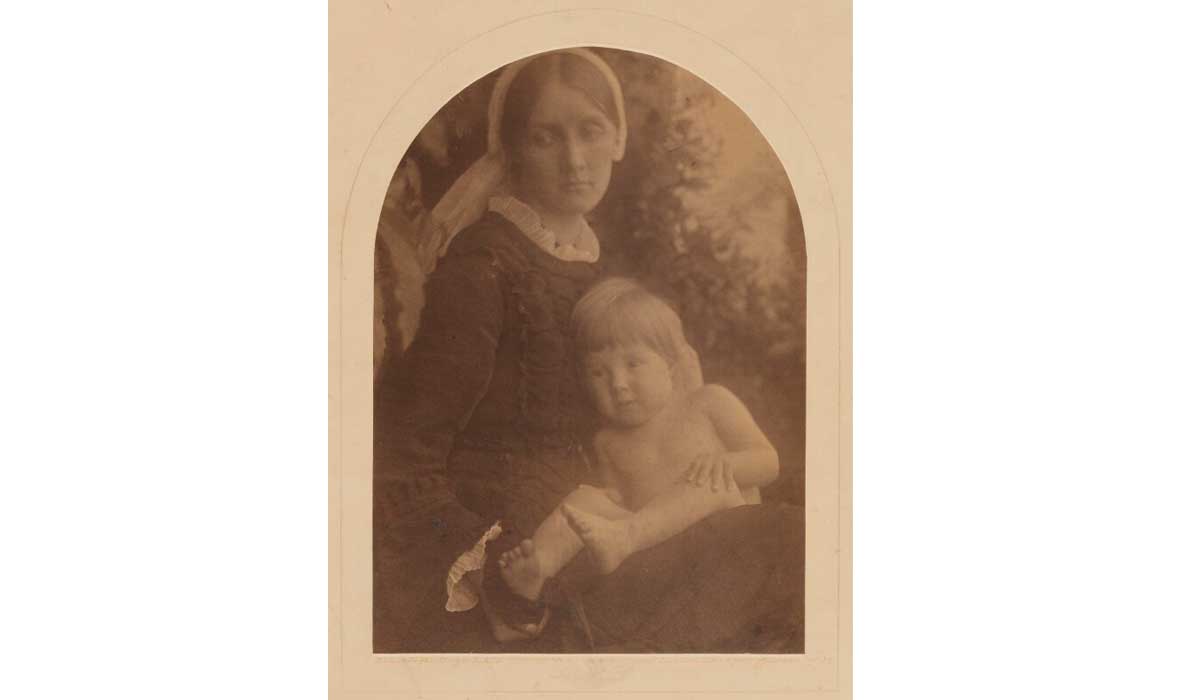 Cameron was a devout Christian and religious subjects featured prominently in her work. This photograph shows Julia Duckworth with her son in a composition reminiscent of Italian Renaissance paintings of the Madonna and child. While most of Cameron’s religious subjects are depicted draped in fabric, Duckworth notably appears in Victorian mourning dress. Taken two years after the death of her first husband, by which she was devastated, her downturned gaze also lends the photograph a dignified and sombre air. - NPG x18017 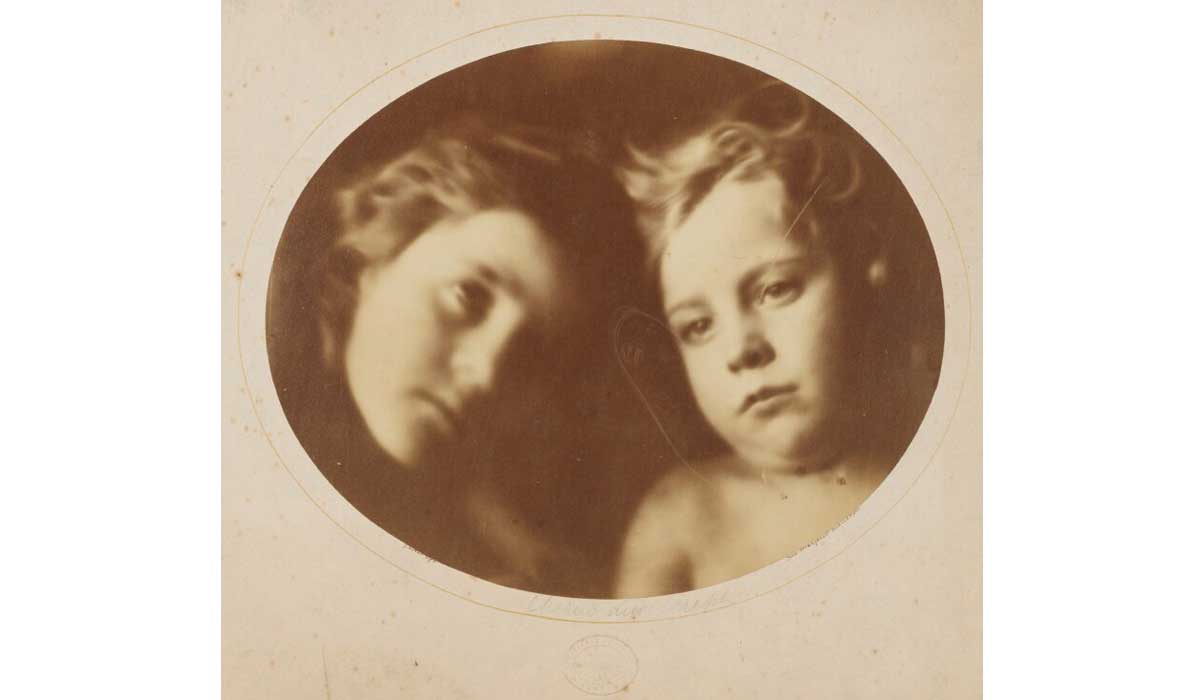 Children were a natural and readily available subject for Cameron’s photographs. A mother to six children, she was also surrounded by the children of those from her social circle and family. Cameron would often direct her child sitters to pose as literary or biblical characters and her photographs exemplify the idealised Victorian view of the sacredness and innocence of childhood. Here, Elizabeth Keown, the daughter of an army officer based on the Isle of Wight, and Freddy Gould, the son of a local labourer and fisherman, are posed as angelic beings in an intimate composition that draws attention to the cherub-like roundness of the children’s faces and their youthful, glistening eyes. - NPG x18006 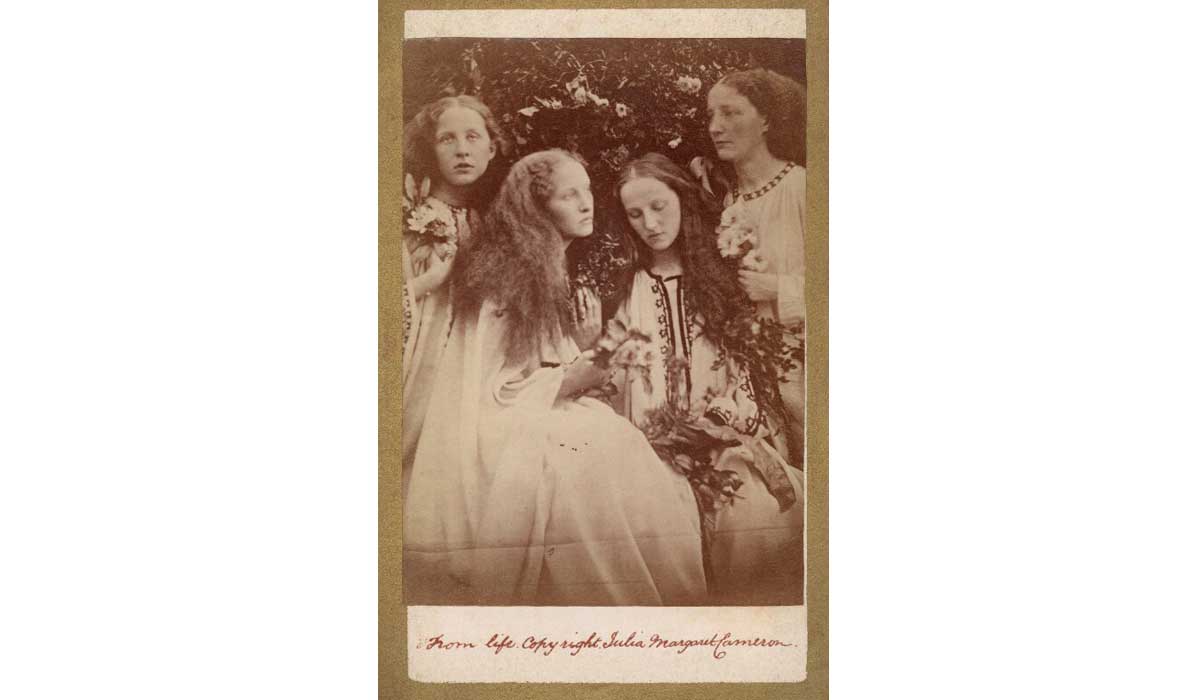 Historically, most attention has centred on Cameron’s portraiture, but the aesthetic value of her group tableaux has since received more consideration. The difficulty in creating group portraits and ensuring each sitter’s stillness for the duration of the photographic exposure is reflected in the choice of outdoor setting to ensure optimum light, but also adds to the composition’s connections with the spiritual and natural world, which were also preoccupations for Cameron’s Pre-Raphaelite contemporaries. This group shows the daughters of Charles Edward Fraser-Tytler, a Scottish landowner and associate of Cameron’s brother-in-law Henry Thoby Prinsep. Mary Fraser-Tytler (pictured second from the left) later married George Frederic Watts and became a respected artist and designer in her own right. Produced as a carte-de-visite, Cameron used such smaller formats to publicise her work and as another way to share her photographs with family and friends. - NPG x18070