Vivien Leigh (1913-67) was one of the most famous women of the twentieth century. Her most celebrated performance, as Scarlett O’Hara in Gone With the Wind (1939) brought her worldwide recognition and the first of two Academy Awards. Leigh’s second Oscar was for the 1951 film production of Tennessee Williams’ play A Streetcar Named Desire. This selection of magazine covers featuring photographs of Leigh illustrates the extent of her international appeal as one of the most talented and beautiful screen and stage actresses of the era. 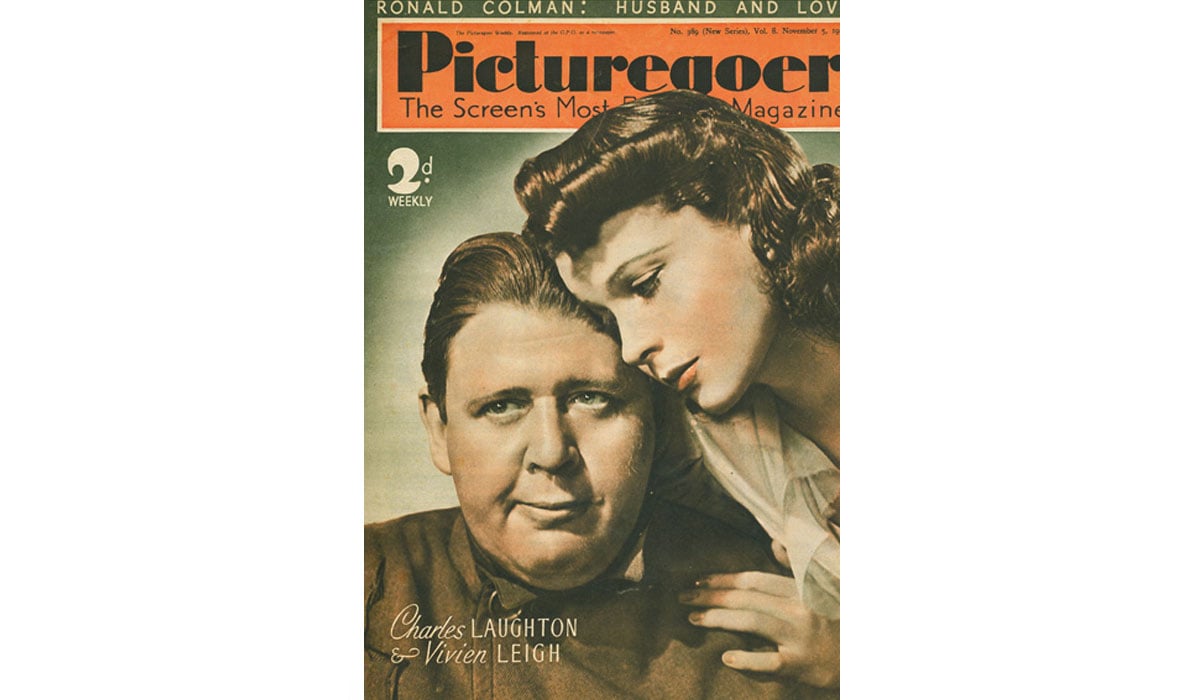 Charles Laughton and Vivien Leigh in St. Martin’s Lane (US title: Sidewalks of London), directed by Tim Whelan for Mayflower Picture Corporation, 1938. The film is an ode to London’s Theatreland. Leigh plays a coquettish, Cockney street urchin who yearns to be famous. She joins a group of buskers headed by Laughton before being discovered by a famous producer and made the star of a West End revue. This was the sixth film Leigh made while under contract to Hungarian producer Alexander Korda, and the last film she made before going to Hollywood to play Scarlett O’Hara in Gone With the Wind. 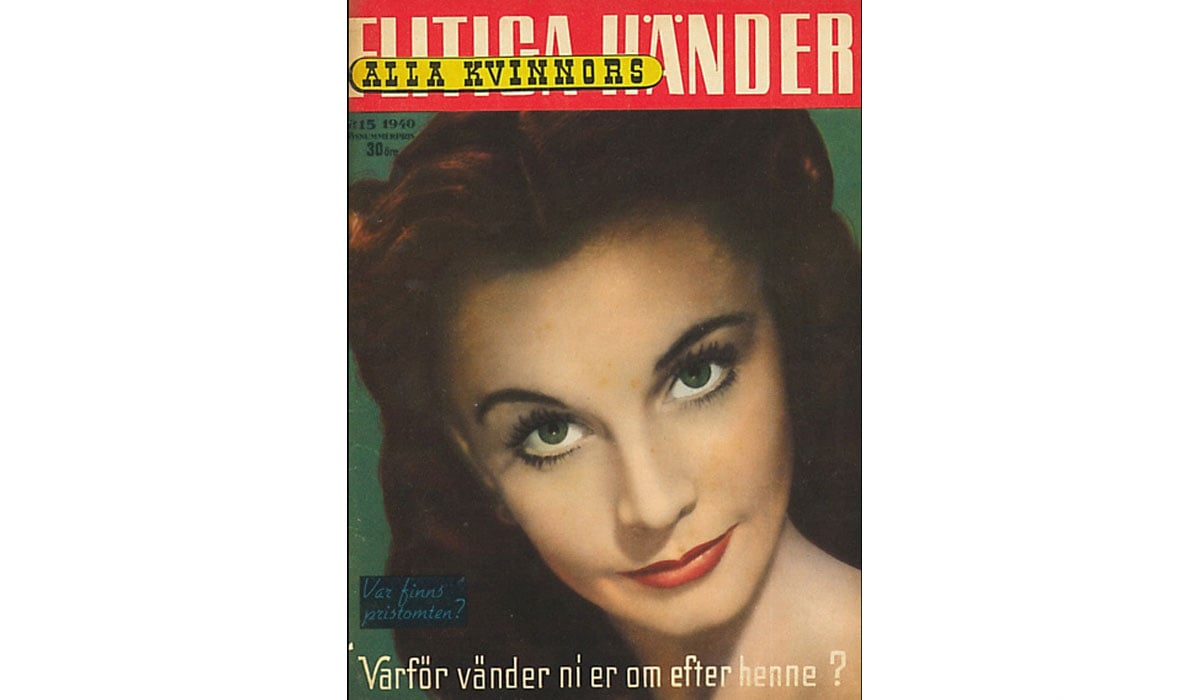 This cover shows Leigh as Scarlett O’Hara in Gone With the Wind, directed by Victor Fleming for Selznick International, 1939. Producer David O. Selznick had launched a massive publicity search for the right actress to play Margaret Mitchell’s feisty Southern belle. Leigh beat seemingly insurmountable odds to emerge the winner. The idea of a British girl playing such a popular American character sparked a storm of controversy, but Leigh persevered. Her career-making performance in this film won her the Best Actress Academy Award and launched her to international stardom. 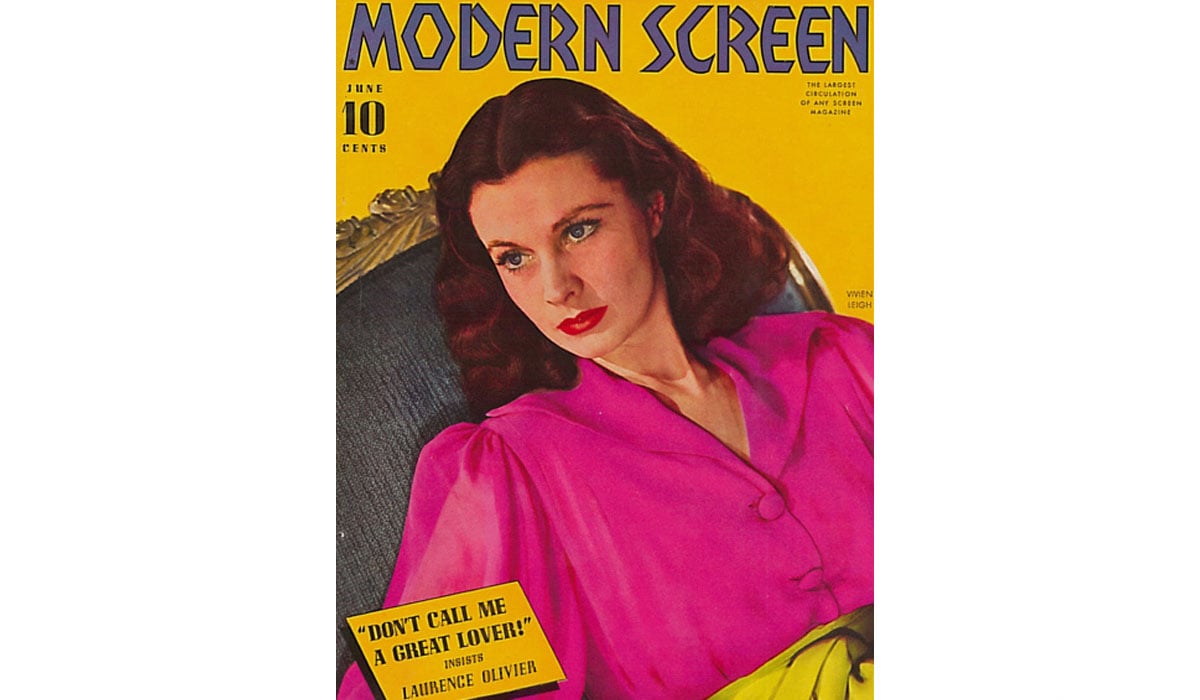 Following Gone With the Wind, Leigh was loaned to Metro-Goldwyn-Mayer (MGM) to star opposite Robert Taylor in the wartime tearjerker Waterloo Bridge. MGM still photographer Laszlo Willinger took several now-famous portraits of Leigh around this time, including this rare colour shot. ‘I tried to make a photograph as dramatic as possible by lighting dramatically,’ Willinger said. Although he photographed the biggest stars under contract to MGM, he told historian John Kobal, ‘The one I liked best to work with was Vivien Leigh. She was a thorough professional.’ 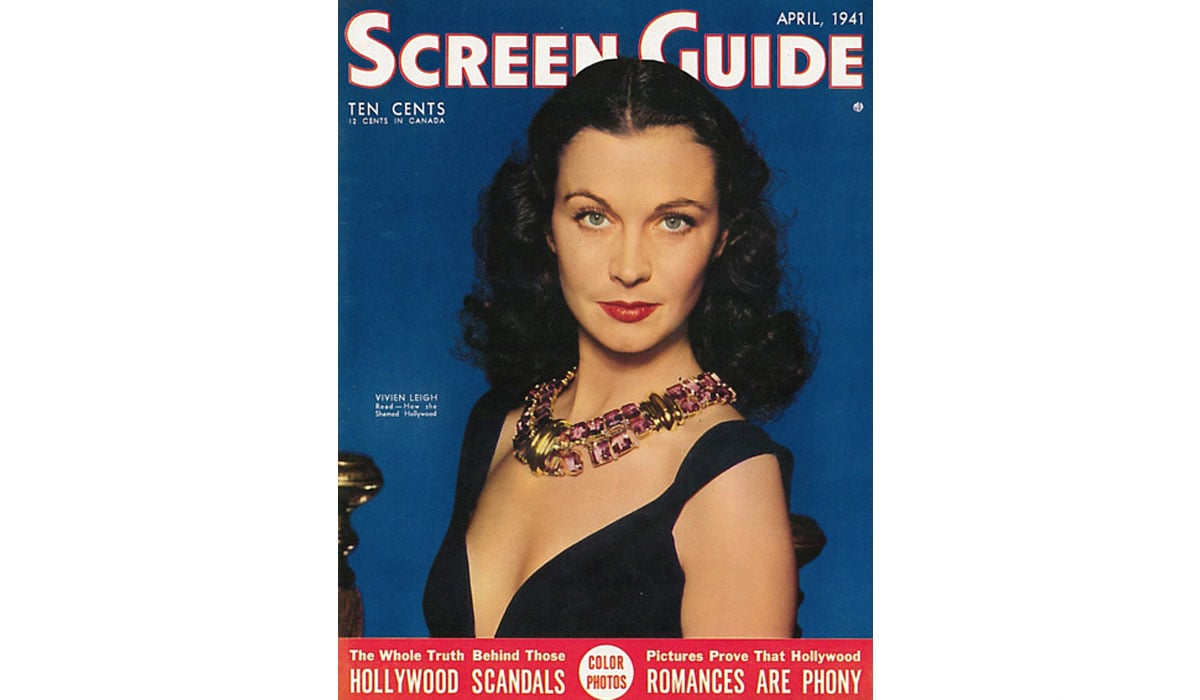 By the time this issue of Screen Guide appeared on newsstands, Leigh was no longer in Hollywood. She and her husband, the actor and director, Laurence Olivier (1907–89) had planned to return to London after war was declared in 1939, but a bad investment in a failed production of Romeo and Juliet on Broadway left them stranded in America. In late 1940, shortly after they married, film producer Alexander Korda offered them the lead roles in the historical biopic That Hamilton Woman. The film starred Leigh as Emma Hamilton and Olivier as Horatio Nelson. Jack Albin would photograph Leigh again in 1950 when he worked as a still photographer on the Warner Bros. Film version of A Streetcar Named Desire. 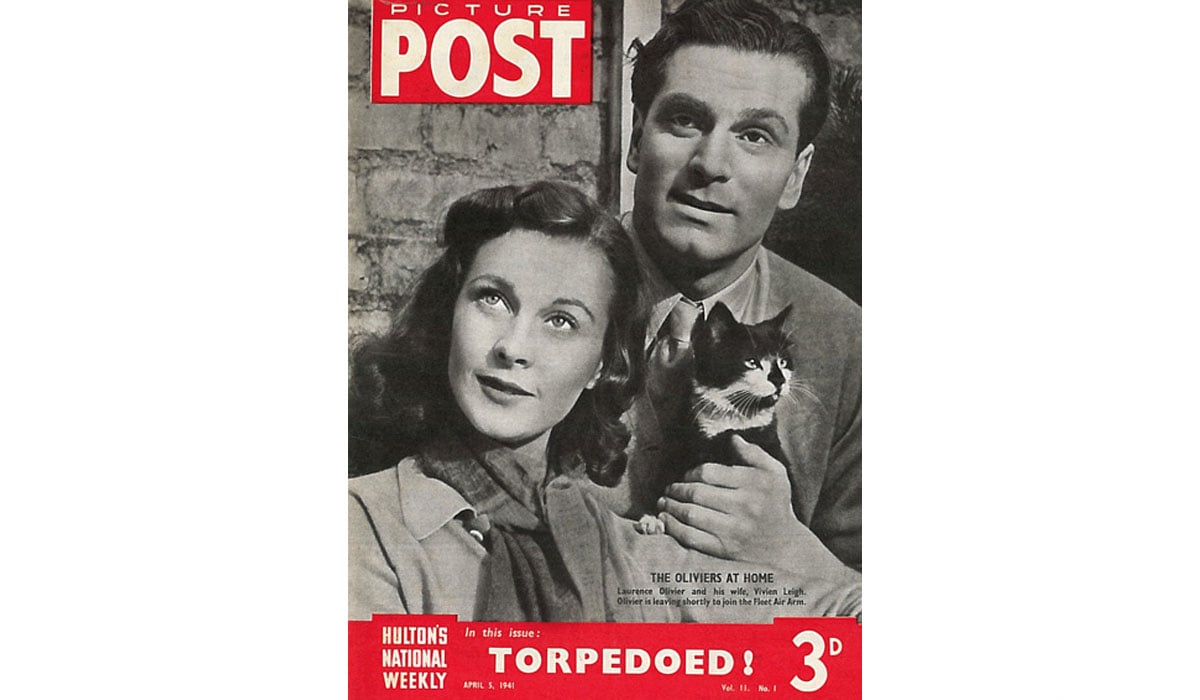 Leigh and Olivier returned to London in December 1940 to offer their services to the war effort. Vogue reported: ‘[Leigh] finds war-time London absorbingly interesting; new, real and vital, yet truly London. Above all, she is glad to be back among her own people, to be sharing with them the rough and the smooth: not hearing it reported on the radio, as a far-away nightmare, but living it, a part of real life–her life as an Englishwoman.’ She is shown here with Olivier and their cat Tissy in the garden of their Chelsea residence, Durham Cottage. 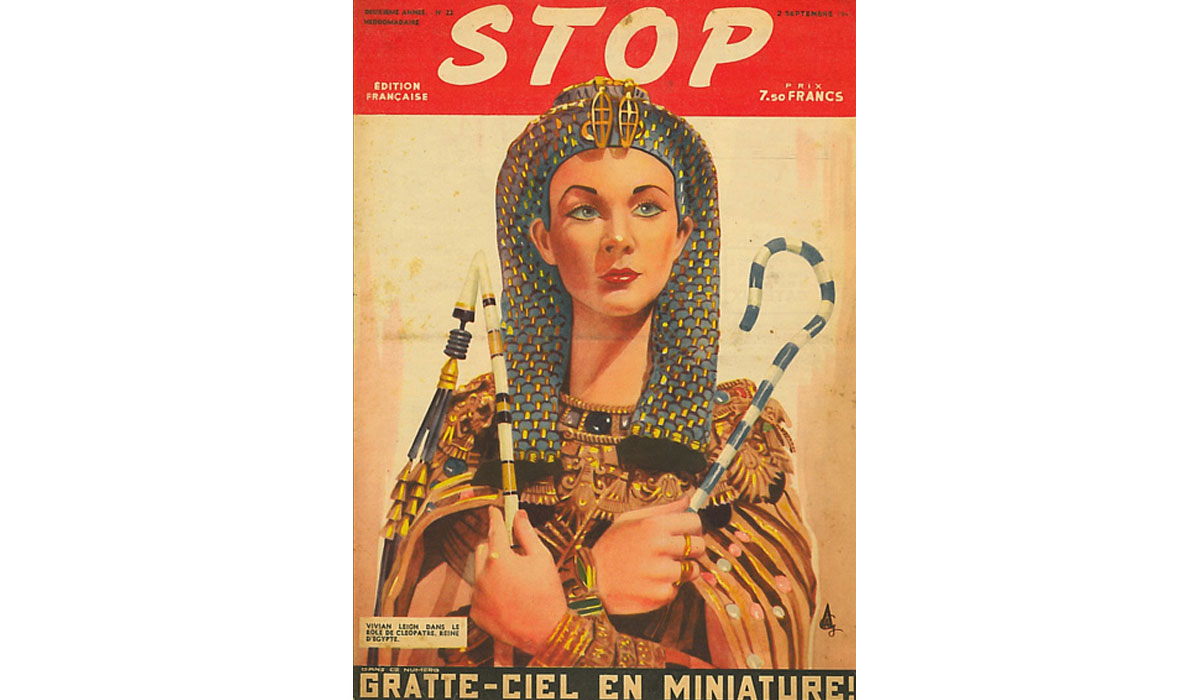 This cover shows Leigh as Cleopatra in George Bernard Shaw’s Caesar and Cleopatra, directed by Gabriel Pascal for Independent Producers/Pascal Film Productions/Eagle-Lion. This was the first film Leigh appeared in since returning to London. She was still under contract to David O. Selznick who refused to loan her out for any film that he deemed less prestigious than Gone With the Wind. Filmed in Technicolor with lavish sets and intricate costumes designed by Oliver Messel, Caesar and Cleopatra was the most expensive British film to that date. Sadly, it failed to make a profit at the box office. 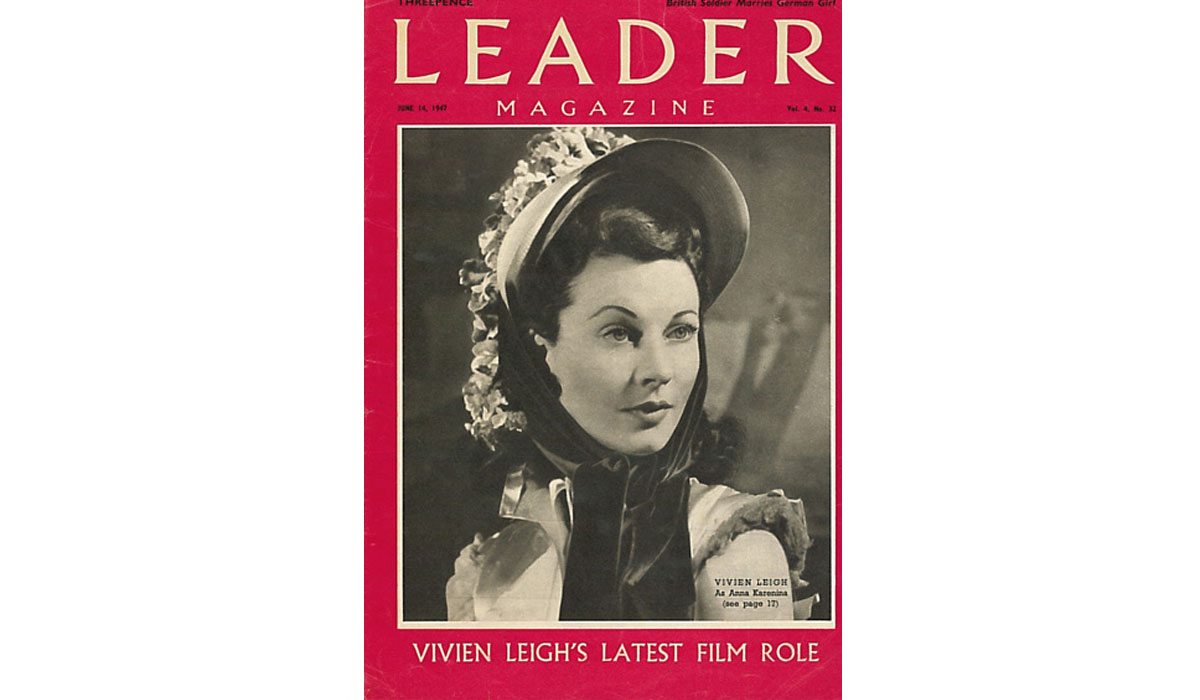 In the summer of 1947, Leigh travelled to Paris to be fit for costumes for the upcoming screen adaptation of Anna Karenina, directed by French filmmaker Julien Duvivier. The costumes were designed by Cecil Beaton, who also took the publicity portraits for the film. Leigh is shown here in Beaton’s studio modelling a bonnet and unfinished dress. 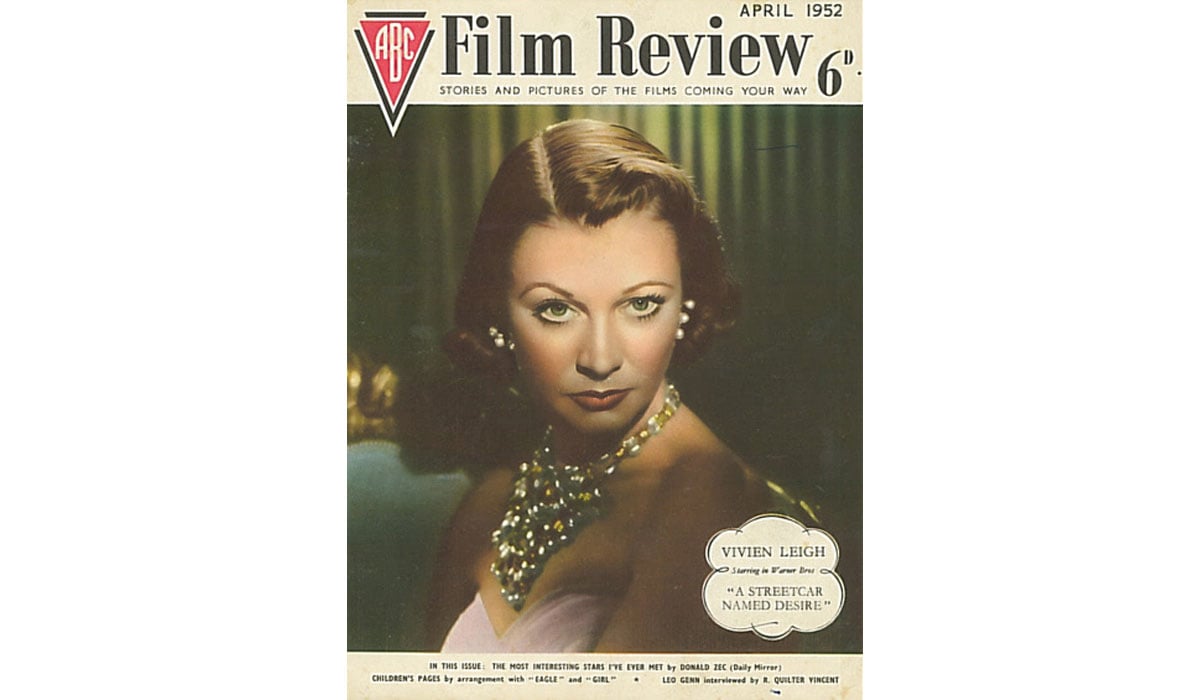 After starring in the London stage version of Tennessee Williams’ A Streetcar Named Desire, Leigh was invited to Hollywood to reprise the role of Blanche DuBois in the Warner Bros. film, directed by Elia Kazan. Blanche was a character that Leigh felt an innate connection with, saying, ‘She is a tragic figure and I understand her.’ Watching the film today, it is difficult to separate Leigh’s life from her art. She won a second Academy Award, a BAFTA and the New York Film Critics Circle award for her powerful performance. 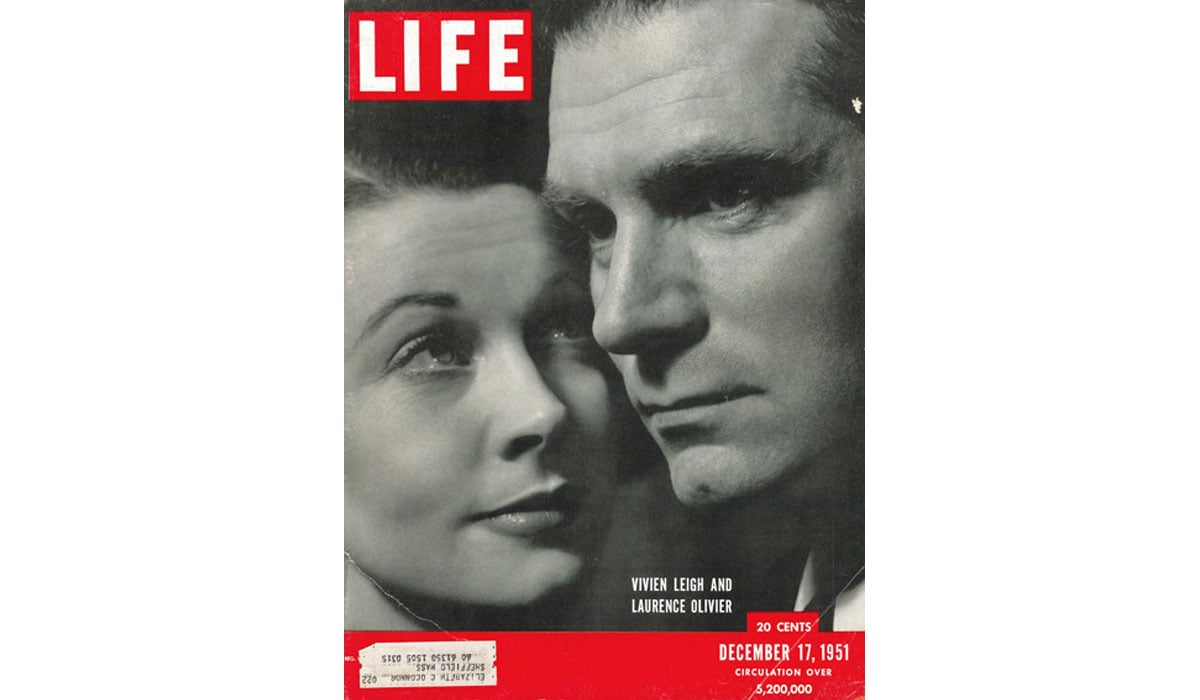 In 1951, Leigh and Olivier travelled to New York to star in a double bill of Shaw’s Caesar and Cleopatra and Shakespeare’s Antony and Cleopatra. Life photographer Philippe Halsman had photographed Leigh for a 1946 cover and experienced difficulties with her mercurial personality. When he was again commissioned to photograph her for the 17 December 1951 cover – this time a joint portrait with Olivier – Halsman planned to exact his revenge by posing them so that Olivier’s face was in full view while Leigh’s was obscured by his shadow. Halsman wrote in his book Sight and Insight (Doubleday, 1972): ‘I placed my sitters in the position I had conceived. However, during the sitting Vivien moved slightly away from her upstaging husband and looked at him with a charming, adoring expression. It destroyed my original design but probably resulted in a much better picture.’

This Willy Rizzo photograph was published on the cover of Paris Match to mourn Leigh’s death in July 1967. Taken ten years earlier in Paris, it shows Leigh (with Olivier in a red tunic in the background) as Lavinia in Shakespeare’s Titus Andronicus. The Oliviers took the play on a two-month European tour in 1957, performing in Yugoslavia, Poland, Croatia, Austria and France before bringing it back to London for a short season at the Stoll Theatre.

Take a look at the blog: Vivien Leigh: a Star in Wartime