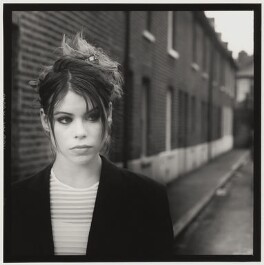 This second display in the newly created below-ground Bookshop Gallery space follows the successful inaugural exhibition of Barry Marsden’s ‘Art of Cooking’ (continues until June 1st). It consists of newly acquired photographs of subjects aged 30 and under.

Anticipating who will be famous in the new millennium it includes subjects that have already had an impact on British life and culture in the early decades of their lives and contrasts with the more mature subjects on show in the Ground Floor displays.

From politics are shown two of the younger MPs from Victoria Carew Hunt’s portfolio 121 – Women in parliament – Claire Ward and Yvette Cooper.

Acting is represented by Natasha Law’s evocative colour portrait of her brother Jude and his wife Sadie Frost, and David Levine’s portrait of Paul Nicholls. Writers include Alex Garland (author of The Beach) and 19 year old Rebecca Ray.

Finally, the youngest subjects on show are the singers Billie by Chris Clunn and Charlotte Church by Louise Bobbe.

Yvette Cooper b. 1969
Labour M.P. for Pontefract and Castleford; Leader writer and economic columnist for The Independent
By Victoria Carew Hunt (b. 1952)
Bromide print, 1998
x88082