Young Writers of the Thirties 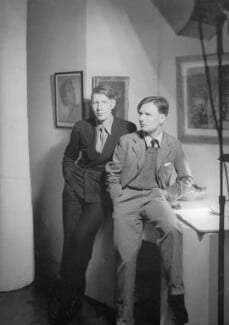 During the 1930s young British and Irish writers were a vigorous influence on the international literary scene. Using a variety of experimental and direct styles, they responded dramatically to the extraordinary events of their time. In fact, this generation brought English literature into closer contact with social and political upheaval than it had been since the French Revolution fired the imagination of the Romantic poets.

Young Writers of the Thirties attempts to capture some of the spirit of this important decade. It deals with issues that aroused the new generation of writers; it looks at the style of their response as well as the nature of their involvement. The exhibition focuses attention on five writers, each important in his own right and all linked by common elements in their writing: W.H. Auden, Cecil Day Lewis, Christopher Isherwood, Louis MacNeice and Stephen Spender.

The exhibition includes some 300 items. Among them many unpublished letters which illustrate each writer’s reactions to political and literary events, and some manuscript drafts of both published and unfinished work. The bulk of the display consists of photographs of the period used to illustrate themes rather than simply as anecdote; the emphasis is definitely literary. Some of the photographs are blow ups of background scenery. Much of the photographic material is by Humphrey Spender, brother of Stephen, an important photographer of the time.

The photographic exhibits are connected by a written commentary, but the general aim is to let the writers speak for themselves.

17. Christopher Isherwood holding his first novel All the Conspirators on the day of publication in 1928
Photograph: Edward Upward

39. The Dodds’ garden at Birmingham when both W.H. Auden and Louis MacNeice were frequent visitors
Collection: E.R. Dodds
(RN: 25690)

44. Photo-montage by John Heartfield of a caricature of Goering against the background of the burning Reichstag building, Berlin in 1935.
(RN: 25745)

45. A street cafe in Berlin, with a glass dome for the orchestra
Collection: Daily Herald Picture Library
(RN: 25686)

49. Scene of bicycles in a street, Bolton
Photograph: Humphrey Spender

53. Police taking possession of the Rohe Fahne building, the centre of the Berlin communist party, after the riots of 10 August 1931
Collection: Daily Herald Picture Library
(RN: 25702)

55. Scene in Innsbruck during the Nazi occupation of Austria, 1938
Photograph: Humphrey Spender
(RN: 25704)

56. Members of the staff of the communist party headquarters at the Karl Liebknecht-Haus on Bulowplatz, Berlin, being taken for questioning about the murder of two policemen, 17 August 1931
Collection: Daily Herald Picture Library
(RN: 25703)

73. A member of the band rests on his way to London on one of the many hunger marches of the unemployed.
Photograph: Humphrey Spender

79. Group Theatre production of Trial of a Judge by S. Spender, 1937
Scene outside the Palace of Justice
Produced by Rupert Doone and designed by John Piper
Photograph: Humphrey Spender

80. Group Theatre production of The Dog Beneath the Skin by W.H. Auden and Christopher Isherwood, 1935-36
Scene: Members of the chorus
Produced by Rupert Doone, designed by Robert Medley, with music by Herbert Murrill Collection: Robert Medley
(RN: 25713)

83. Group Theatre production of The Ascent of F6 by W.H. Auden and Christopher Isherwood
Scene: Mr and Mrs A at breakfast
Produced by Rupert Doone, designed by Robert Medley with music by Benjamin Britten, 1934
Collection: Robert Medley
(RN: 25715)

85. Group Theatre production of Out of the Picture by Louis MacNeice, 1937
Scene: Outside a cinema
Produced by Rupert Doone, designed by Robert Medley and G.N. Monk, and music by Benjamin Britten
Collection: Robert Medley
(RN: 25711)

101. The Prime Minister Arthur Neville Chamberlain (1869-1940) about to leave Heston aerodrome for the last of his meetings with Hitler during the Munich crisis, 29 September 1938.
Collection: Radio Times Hulton Picture Library

115. Louis MacNeice at a reception given by Faber and Faber Ltd., 1961
Photograph: Mark Gerson

124. André and Olive Mangeot with both their sons, standing behind Christopher Isherwood’s car
Photograph: copy of original in collection of Sylvain Mangeot
(RN: 25725)

Additional portraits included in the exhibition:

A handlist of other exhibits, such as correspondence, books and anthologies, is included in the exhibition catalogue.

A file of visitor comments and reactions to the exhibition is available to see on request.

‘It sets out to illustrate the reactions to political and literary events, via the letters and manuscripts of five writers: Auden, Day Lewis, Isherwood, MacNeice and Spender. It assembles in the process a great deal of fascinating unpublished material and produces many interesting connections. The display is cunningly designed, the sense of foreboding conveyed by a gradual darkening as war approaches, and by a sequence of intriguing and unfamiliar photographs – mass observation studies of life in Britain juxtaposed with shattered Guernica and Berlin. Many of the most evocative photographs are by Humphrey Spender.’

‘The exhibition Young Writers of the Thirties, selected by Alice Prochaska and designed by my brother Humphrey Spender, centres on W.H. Auden. Cecil Day Lewis, Louis MacNeice, Christopher Isherwood and myself. In doing this, it follows closely the impression that readers of anthologies such as New Signatures and New Country, and the periodical New Verse may have got at the time: that the thirties was a succession of literary events occurring in the biographies of those young writers and ending when war broke out in 1939, soon after Auden and Isherwood had departed for America.

[...] Nearly all the photographs, and some of the documentary material, are fascinating in revealing the style of a period.’

Stephen Spender, ‘Creating in the Mind a Map’ in New Statesman, 2 July 1976

‘Having called this exhibition Young Writers of the Thirties, the National Portrait Gallery has chosen to consider effectively only five writers from that period – Auden, Isherwood, Spender, MacNeice and Day Lewis. On a thoughtfully provided suggestions list, many visitors have pointed out the incongruity of such a sweeping title and protested at the narrow limits to which the exhibition has been confined.

[...] The five form a very compact and convenient group; they all come from a similar background, at times held similar if not identical political views, and, very consciously, wished to express their ideas in language which, if not ‘non-literary,’ was said to be inspired by unliterary things.’

‘The exhibition is divided into five sections, containing many photographs of the five writers. In these, particularly the posed studio shots by Howard Coster, the young writers gaze at us or one another with varying degrees of intensity, often languorously propped against something. They seem to express their awareness of their own aloofness. This pose would be irritating were it not likely that it was carefully cultivated [...].’

‘Young Writers of the Thirties’ in Connoisseur, September 1976