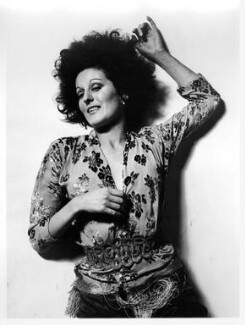 From 27 October 2001 the Balcony Gallery will display 33 previously unexhibited works by three distinguished photographers who began their careers in the Swinging Sixties, capturing Michael Caine, Barbara Windsor, Julie Christie and Germaine Greer at the outset of their careers.

Michael Ward, actor-turned-photographer, came to prominence with his work for The Show Page in the Evening Standard for which he captured the emerging talents of the era before moving in the mid-1960s to the Sunday Times where he worked until the early 1990s. This selection of his work focuses on British women from the stage and cinema who became icons of the age: Diana Dors performing at the Room at the Top nightclub, Elizabeth Seal, the photographer’s future wife, on stage in Irma La Douce and intimate “at home” shots of sixties sex symbols such as Barbara Windsor, Julie Christie, and Marianne Faithfull.

Bryan Wharton is best known as one of the star photographers of the Sunday Times under the editorship of Harold Evans. His works from the sixties include an historic group of the leading players of the Peter Cook-owned Establishment Club (including the Johns Fortune and Bird, theatre designer Sean Kenny, and fellow satirists Dudley Moore, and Alan Bennett) as well as provocative Germaine Greer study taken whilst she was writing the Female Eunuch in 1969. Wharton’s other classic photographs include George Brown dancing “the frug” on the Queen Mary, an “unpunishable” John Paul Getty and the future Marquess of Bath in his “Karma Sutra” room at Longleat.

Michael Seymour’s career has focused mainly on his work as a film production designer, most notably on Alien for which he won a British Academy Award and was nominated for an Oscar. In the sixties he worked on Richard Lester’s The Knack, Antonioni’s Blow Up and Karel Reisz’s Isadora. Before this he had worked as a photographer for Scene magazine with the writer Derek Marlowe and chronicled many of the leading players of the time including Julie Christie, Terence Stamp, Michael Caine, actress and pop artist Pauline Boty and fashion designers Tuffin and Foale.

Together the three bodies of work give a sense of the enormous idealism and creativity of the age, the sense of new energies released amid great optimism.