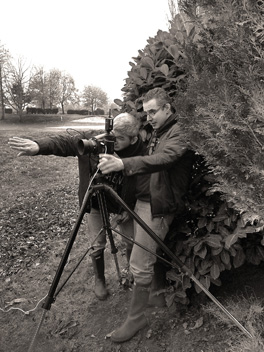 When did you first start taking Photographs?

As long as we can remember. Jonathan remembers being given a camera from his father when he was about eight years old. Edwin was encouraged to draw and given a Minolta camera at around the same age too.

That's a huge and complex list. We derive huge amounts of influence from art history and from the other visual arts. People tell us that there is often a formalism in our work – and attention to image construction, and perhaps the influence of art history is one of the reasons why people see this in our work. But we don't limit ourselves to one source. One of our projects – Chrysalis – was hugely influenced by mathematics, nature, literature and music composition theory.

We always separately had wanted to do something in the visual arts – photography became our main chosen vehicle for this.

What is it about portraiture that attracts you? And how do you feel photography is

We would not separate photography out from the other visual arts, and certainly not for portraiture. What is important is to try and find the essence of the person and what you want to say about them. That can be in a very naturalistic way, but it can also be very stylised and selective in outlook, or it can be somewhere in between. The important thing is to think through what it is you want to say; then you have to work, and rework, and rework, and rework again at the image (both in shooting and in editing which images you use) in order to achieve this. And we are always thinking, "OK, maybe an image says enough, but how could you make it say more?"

We cannot really highlight that many individuals, but more projects. We had great fun creating portraits around the most recent James Bond movie, Spectre. Our Chinese Gymnasts project was incredibly special, as was the Road to 2012 commission. Both of those were real highlights in our sporting portraiture. There was also our Manga Dreams project. And certainly we had enormous fun last year creating portraits for Star Wars: Episode VII. That was just enormous fun, even though it was incredibly hard work, and we were thrilled to see our images used in the main film poster and elsewhere too. Others we really enjoyed working with include Duran Duran, Elton John and Rufus Wainwright.

If possible, yes. But in many of our sport-related projects in training halls (such as the Chinese Gymnasts) there are many people that you simply cannot research. Also, there is something very fresh and spontaneous about arriving, and encountering someone you don't know and then reacting to that. And many of our best sport-related portraits are very reactive and responsive for exactly that reason. Sometimes all that is needed consciously is that instinctive reaction – and everything else to do with making a portrait, image construction, choice of position/ background, etc. can be grounded in the subconscious.

Very, very many. We don't know where to start answering that question!

It's "horses for courses". There is no answer to that as it entirely depends on the project, the situation, the individual sitter. Either can both be the correct choice, depending on these criteria.

A lot of recent projects (such as Chrysalis, Manga Dreams, On the Set of James Bond's Spectre and the work we did for Star Wars)have concentrated on ideas of fantasy versus reality, ideas of perception of image by the viewer, and breaking down some of the distinctions between photography and the other visual arts. We are currently working on a new, non-figurative project that explores this idea further. The images are going to be very beautiful and atmospheric.

Sport is a subject we come back to again and again in our work – for almost 20 years now. We never photograph in competition, but instead we document the process of sport that precedes those few seconds of glory or despair.

Actually, we are not really photographing sport at all, but instead we use it as a window onto the human condition, looking at human aspirations, hopes, dreams, endeavour, perseverance and limitations. So in our portraits of athletes we try to find a way to distil something of their character, and also their iconography, the vernacular language of each sport.

This portrait of Paralympic rower Tom Aggar is from Road to 2012, which was a commission we received from the NPG and BT as official artists for the London 2012 Olympiad.

We particularly like the power and the iconic nature of the pose. It summarises Tom's amazing determination and strength. But the colour palette and setting, with more than passing reference to Dutch landscape painting, have been very deliberately used to soften the image, to emphasise the very human nature of his endeavour. (P1790)

We wanted to create portraits around the James Bond film Skyfall, particularly focussing on the incredible "behind the scenes" talents. This portrait of Sam Mendes was taken at Pinewood [Studios], on the set that was being constructed for the London Underground train crash scene.

We are particularly happy with this portrait – we think that it really captures something about Sam well: he is so alert, determined and focussed. We only had him for about seven minutes, but we could have used any one of the frames we shot. There is a real energy, purpose and vision in him, a bit like a young Orson Welles. For us, the vast scale of the set is also part of the reason we love this image: the set gives a powerful context and placement. (x136996)

This is a portrait of the writer Jung Chang; we shot her in 1996, and we have very fond memories of this shoot at her home in Notting Hill. We found her so engaging, helpful and cooperative. But she also came across as a little nervous and fragile, and perhaps it is the tenderness of this shot that appeals to us so much. This image was actually shot spontaneously between more “formal”, posed images (of which we took a quite a few). The gentle introspection and unusual composition of this particular shot has always pulled us towards it.

Jung Chang is right at the left edge of the frame, looking down and out of frame. Much of the image is in shadow, and the composition is quite simple. Hints of her ancestry are at the top of the frame. And, strictly speaking, pretty much every rule about what one "should" do for an insightful, harmonious image has been ignored. Nothing in the image is shown completely, and there could be a disengagement and fragmentation as a result. Yet the various elements come together and feel very harmonious, and this gives a real sense of harmony and meditative thought to the sitter too. That stillness is very much a part of her character, and we feel that we have found a way to represent it visually. (x76980)

Favourite works by another photographer, we have to mention the extraordinary legacy left to the National Portrait Gallery by our dear, late friend Lewis Morley. The images are so very rich and characterful and iconic, and we do still miss him very much. Of course his image of Christine Keeler is always going to be the image he is best known for (he once described it to us as "My Salvation, My Albatross"). But there are so many other great portraits by him, from Stephen Hawking and Vanessa Redgrave marching together to the beautiful portrait of Vanessa Redgrave, Natasha Richardson and Rachel Kempson, Lady Redgrave. And his portraits of people like Jeff Beck and the Establishment Club in the '60's will remain wonderful moments in time...