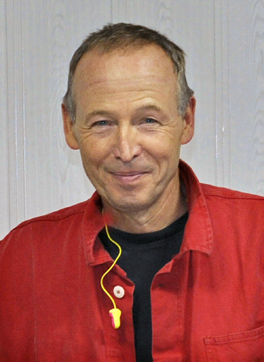 I bought a camera and an air ticket to New York in 1972. At the time the camera was just to be a diary for me, as I travelled I took photos. I was 22.

I knew nothing about photography but my sister had lived in Paris and she used to send black and white postcards home of Parisian scenes by two French street photographers. One was called Albert Monier and the other photographer was called ‘Yvon’ (Pierre-Yves Petit). In England in those days postcards were in garish colour, mostly staged and often heavily retouched, usually of Piccadilly Circus or the Royal family. The postcards from Paris on the other hand were of barges on the Seine at night, tramps, buskers, flower sellers, all in black and white. I think they were my first influences, and during my childhood my father subscribed to the National Geographic and I think that fascinated me too.

No, I was attracted by what I began to photograph, and then thought I would like to continue doing this.

It may sound funny but I most like photographing people who are at complete ease in front of the camera. They either don't care that you are taking their picture or they are involved in something much more important than the photography. Generally speaking famous people do not interest me, I find a welder or a seamstress more enjoyable to photograph and much more interesting.

Often the brief is all I know. I might not know them at all, or I know a little about them. Sometimes knowing too much gets in the way and ignorance can be bliss.

There is no specific individual I would like to photograph. I'm essentially a reportage photographer, who at certain moments meets a person and their portrait appears as part of a story. It's often just luck!

At the start I only shot in black and white, but now with digital cameras, colour seems no longer the problem it once was for me. Black and white film was easier to shoot, all light was light, it was fast, whereas with colour all sorts of colour temperature affected a picture and correcting it slowed everything down. I find that sometimes colour enhances, but usually b+w focuses a photo without distractions. All said and done, I do love black and white.

I'm going to Kazakhstan and Russia to photograph copper and steel industries. As usual it's all about the people I discover in these places of work. I meet some wonderful people, there is a certain serendipity involved, it’s like hitch-hiking, not knowing what's around the corner.

Favourite works by the photographer in the National Portrait Gallery Collection 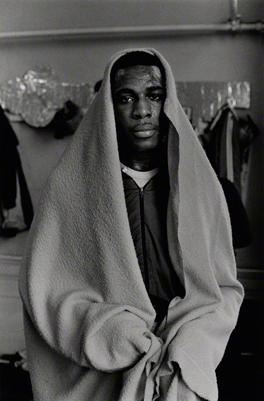 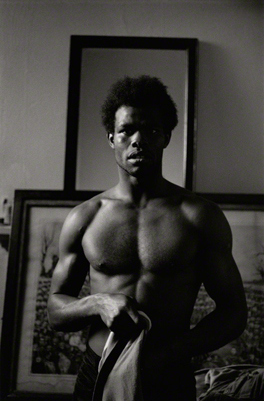 Frank Bruno (1983) - NPG x199251 and Kirkland Laing (1980) - NPG x199250: Two are of boxers, Frank Bruno and Kirkland Laing. They were both taken in the same gym, The Royal Oak in Canning Town, East London, two years apart. Frank Bruno was photographed after training and he is shrouded in a towel. He had a biblical look about him, and behind him on the wall is a birthday gift, a silver foil "key of the door", he was just 21 years old. The photo of Kirkland Laing, known as "The Gifted One" was taken in 1980. Behind him in the changing room you can just glimpse a framed etching printed in 1860. The image is of a famous open air fight for the Championship of Great Britain and America. It was just propped up against the fireplace in the chaos of the boxer’s tiny changing room.