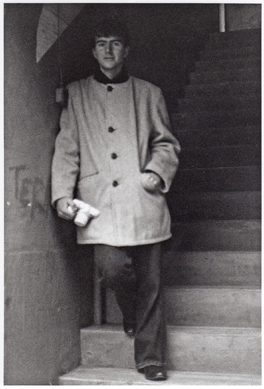 In about 1979 or 1980. I was staying in the London studio of artist Brian Clarke. David Bailey was a frequent visitor and there were lots of photography books. Most memorable were the ones with the work of Diane Arbus and Robert Mapplethorpe. The only book I owned as a child was one about famous people in history. I wasn't a big reader, but loved the pictures of all these greats from the past. It seems prophetic now.

Punk certainly influenced my technique in that it was very basic and eschewed technical excellence with a workable approach. Stylistically, photographers such as George Platt Lynes, Cecil Beaton, Guy Bourdin, Diane Arbus, Irving Penn and Robert Mapplethorpe were my favourites. Beyond this, my peer group and Patrick Procktor, who I lived with, influenced who I actually photographed. Patrick introduced me to Ossie Clark, John Schlesinger, Jill Bennett, George Melly, Joe Tilson, David Hockney and many other artists from his generation. Some of these – Ossie, Joe and John Schlesinger – are now represented in the National Portrait Gallery’s Collection. My peers were all 'famous' on the scene and this drew my attention to document the ones that caught my imagination. I had always been conscious of things being a record for the future and it seemed like an important time. I was also a lover of writer Edmund White and he introduced me to Neil Bartlett, Alan Hollinghurst and Adam Mars-Jones. So it was my world, but I was conscious of other photographers from different eras capturing the circles they moved in and wanted to emulate them.

It was only hearing about David Bailey and his stories that made me think it would be a good thing to be a photographer. In my teens, I bought Paris Vogue every month to look at the fashion pictures by Guy Bourdin, so I've since realised that I was interested in photography then, but hadn't realised it was something I could do.

What is it about portraiture that attracts you?

A portrait photograph can show us something of the subject we would never see. It also reveals something about the photographer, how they see, what they see that others haven't and what they got from the subject that others couldn't. It can also suggest questions about the relationship between the artist and sitter. It can also reflect in broader cultural terms the period in which it was taken.

And how do you feel photography is particularly effective for portraiture?

Photographs are easy to understand and we tend to believe what we see in a photograph, that it must be real.

Usually the ones where I have a close friendship with the sitter and the location feels like an escape or an entry into a private world, such as Edmund White in Paris, Avignon and Istanbul. Meeting Patrick Proctor for the first time and photographing him on his sunny roof terrace in Marylebone drinking Vermouth and gossiping was special and it was the start of a lifelong friendship.

No, I think it would make for an obvious picture – I wouldn't want to incorporate what's already known about them into the picture. I respond only to what I see in them at that moment – what only I get to see.

I have started designing furniture with some of the classic black and white images on them. Watch out for Gilbert & George dining chairs!

Although we were all ambitious and knowing, it's still an innocent moment full of promise, which wouldn't last long. Trojan's eyes are full of bathos and his Picasso lips. Leigh's actual face was rarely seen after this – it was always hidden by costume. (NPG x131399)

This took less than five minutes to do. He greeted me, showed me into his sitting room and this picture appeared. It's simple, but descriptive with lots of visual information and it was a fleeting moment. (NPG x31830)

Self portrait with Quentin Crisp, 1986

Crisp was the ‘queer of queers’, a legendary ‘queen’. Oddly he was the most difficult person to photograph – stiff, awkward, disinterested, so I asked the cleaner to take one of us together and it's now in the National Portrait Gallery's Collection. I feel like it proves I existed. (NPG x139979)