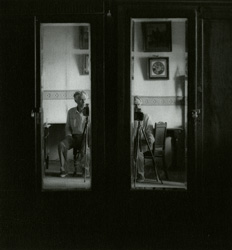 No. I became one almost by coincidence after a long period of not knowing what I was going to do. In 1968 I thought I might make documentary films but realised I was no good at telling a story; however I bought a still camera as I felt I should learn about photographs and thanks to having studied at Kokoschka’s Summer School I seemed to have a certain (slight) aptitude for photography. I was lucky to persuade Bill Brandt to give me some lessons.

There are many; particularly people in India. The enjoyment is coloured retrospectively by how the photographs turned out and a list would be too long and boring.

If possible – and it isn’t always. The environment is very important for me, as well as the light – which is why I like photographing in India as there is nearly always wonderful light.

Black and white ‘lasts’ better. Colour tells one too much

I am currently working on a book on horses.

L.S. Lowry, 1975: I was taken by a wonderful girl, who had worked on his exhibition at the Royal Academy – this was in late 1975. The house was very dark and I needed to use a light I had brought. Unfortunately the electric sockets were so old that no plug I had seen before – or since – would fit. By chance the local electrical shop had one old plug, which worked. Lowry kept saying, “You’re killing me” to which the Royal Academy girl (who was from Manchester) replied “ come along Mr Lowry, you’re always saying you want to die! Afterwards he took us for an enormous lunch at a local hotel. (x126964)

Alan Bennett, 1992: His house was full of character and I photographed him in front of the mirror over the fireplace. The mirror was covered with postcards, which somehow tell one something about him. (P525)

Helena Bonham Carter, 1992: A delight to photograph; I photographed her at my house against a black background. The difficulty with actors is to stop them performing in front of the camera. (x126972)