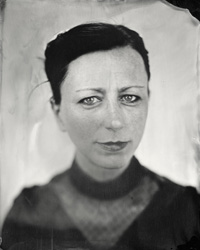 Almost as soon as I could physically pick up a camera: my father was into photography and I was obsessed with his Contax. From the age of four he’d occasionally let me take a picture on it. Later on in my early teens my father would lend me his camera to shoot a roll of film and when you look at some of those shots they fit in perfectly with the work I do now: the edge that’s in my photographs was in there right from the start.

I’m more influenced by painting and fine art in general than photography. Painters like Ingres, Bronzino, Courbet, Picasso in his blue period, Munch, Holbein, Cranach, the Flemish Primitives and more recently Michaël Borremans and Neo Rauch have been an endless source of inspiration. In terms of photography I love the work of Julia Margaret Cameron, Francesca Woodman, Imogen Cunningham and Wolfgang Tillmans.

I always knew I’d be an artist or a musician, all through my teenage years there was a big battle raging between those two, but when I got to my late teens I realised I was a natural with art and a pretty bad musician so the decision made itself.

Some shoots have been electric, like when I photographed Michael Pitt, it was almost like the room caught fire, I love it when that happens. But on the whole, virtually all shoots are intense and a way to travel inside someone’s head. Recently I really enjoyed photographing the writer Elizabeth Jane Howard, a couple of months before she died. I’ve always found her a fascinating woman and am very happy to have had the chance to have met her before she passed away.

As little as possible – I like to know the bare basics but all else I do on instinct. It’s impossible to predict what a person feels like and what mood they’ll be in. And to go with the flow it’s best to come into the shoot without any preconceived ideas. I can’t bear having to do tightly briefed shoots or high-concept images: people aren’t a bunch of bananas that you can shift around in a setting, they’re human and I want to be as open as possible to respond instinctively and sensitively to their needs.

There’s so many people, I’ve not yet shot Tilda Swinton who of course I’d love to shoot, or Donald Sutherland, what a beautiful man with his long silver hair. Joanna Newsom whose music I love is also a favourite as is the painter Neo Rauch. And I regularly see interesting people in film and TV of whom I think wow, would love to shoot him/her but luckily they usually tend to pass my camera at some point.

I just published a book with Hatje Cantz and had a show at Cecilia Hillström Gallery in Stockholm, both on a project called Splinter, a series of distilled images that convey a sense of rooting and timelessness, away from the fragmentation of contemporary life. The V&A (London) and Scottish National Galleries have made acquisitions from this series.

Elizabeth Jane Howard obviously and also Anne Olivier Bell, who I loved meeting, the last link to the Bloomsbury Group (I’ve visited her again since photographing her) and Ralph Fiennes: another person who’d long been on my list of favourite people to photograph. 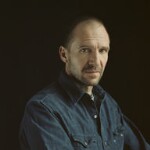