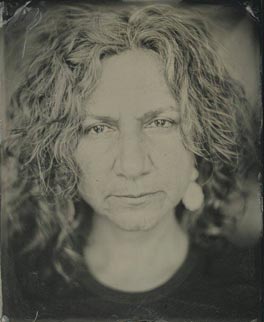 I began photographing seriously in art school in my early twenties. I was a fine arts major and photography was a required course. It took a couple of semesters of being in the darkroom before I switched my major and then graduated with a Bachelor of Fine Arts in photography.

In the early days, I was very much influenced by the New York City street style photographers, like Diane Arbus and Robert Frank. I photographed surreptitiously on the subway and the city streets at night looking for that raw emotion that comes from a large metropolis. As time went on and my life changed, I became more interested in creating photographs rather than finding them. Once I began working with large format cameras, I looked to artists like Richard Misrach and Vija Celmins as inspiration. I have always loved nineteenth-century photography and have looked to several, like Eadweard Muybridge and Timothy H. O’Sullivan, to inform my own work.

No, but photography became a very effective way for me to interpret the world around me and, as a young person in New York City in the late 1970s, I needed a way to do that.

What I love about portraiture is the open-endedness of working with a subject. There is a collaboration that begins the moment I express interest in my subject and continues through the entire wet plate process of coating, sensitising and watching the image clear in the fixer. There’s a give and take between us that is illuminated through the picture and its power is felt immediately. The subject is of course hoping for a good likeness, while I am hoping for something more, for the image to be more than just about that person … for an iconic moment.

Many of the people I photograph I’ve met by chance and often they are the ones who stand out. There’s little pressure in a chance meeting and the wonderful surprise of seeing the tintype being processed right there on the beach.

Some of the best shoots I’ve had are ones where people were very generous with their time and loved the whole process of shooting large format and processing on location. In 2010, I was in southern California and met up with surfer, Kassia Meador, who introduced me to the legendary Hawaiian shaper, Donald Takayama. We spent some time getting acquainted in his surf shop and then went to the beach for the shoot. In a few hours’ time, I made some of my best photographs in the series.

In Australia, I was invited to the farm of Dave Rastovich and partner Lauren Hill to take pictures. I had never shot off the beach up to this point. We spent some time walking around the property and looking at various locations to shoot. Dave had surfboards everywhere, some leaning on trees, some hanging off trees, they were all over the property. Being off the beach and in a private location lent itself to a very relaxed shoot where we could spread out, take our time without the pressure of other people around us.

To some degree if they are well known.

In the surf world there are many people who have contributed to the sport in a significant way, like Kelly Slater and John John Florence, and so photographing them is important to my project. That said, there are also so many women in the industry who don’t get nearly the attention that men do, and they are powerful and amazing groundbreakers. Bethany Hamilton is one and Bianca Valenti, who rides huge waves at Mavericks in California and Jaws [on the north shore of the island of Maui in Hawaii]. They are just a few of the people I would love to photograph.

I am working on a new project related to the iconography of surfing and how it’s evolved over time. It’s in a very early phase so I don’t want to say much more, but the big change is that now I will be making gelatin silver prints from wet collodion negatives. I met Roger at Great Western Beach in Cornwall. He is the author of the book, The Surfing Tribe, and is one of the older surfers in Newquay. Whenever I travel to photograph surfers, I'm very interested in finding the people with history, who have contributed to the sport in a significant way and to discover those who first surfed at this location. It was especially interesting to photograph Roger with his son, Leon, who now works for the Royal National Lifeboat Institution, coincidentally at the same beach where Roger first surfed. Gwynedd Haslock is considered a pioneer of British surfing and she started surfing out on wooden bellyboards to enjoy the power of waves and whitewater. She is one of Britain's oldest female surfers and still surfs today! We met on the beach in Cornwall where she struck a pose similar to one she struck for a magazine in the 1950s.