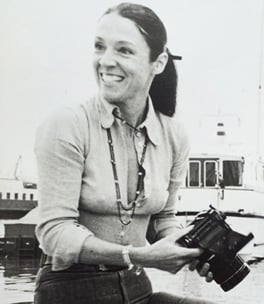 In 1972. I got the first and second prizes in the International Ilford Competition when I submitted two pictures of children: Petite Fille and The Violin. I had no formal training but Bruce Pinkart, an advertising photographer, advised me to have a go at it when I told him that I was longing to be professional in some creative medium instead of being an amateur in ballet, painting, choreography and classical guitar.

I don’t think that anything or anyone influenced me – I just started taking pictures of my daughter and other children and then of people around me. I did not look at other photographers' work because I did not especially like photography – for me, it was just another form of expression. But I soon noticed, included in articles about painters and sculptors, striking black and white photographs by a certain J.S. Lewinski – I liked them very much. So I dared to contact him in order to ask his advice (he was a friend of my guitar teacher). It was the start of thirty-five years of a blissful relationship until he died in January 2008. We worked separately and together on various projects like books, magazine articles and, later on, teaching a crash course of photography in our home.

I never considered it until 1972 and had never looked especially at photographs.

Regarding the advantage of photography over other mediums, for me it was more an opportunity, a last chance to be creative. Painting a portrait is a long process, the sitter becomes sad (I have seen the sagging of the face of my sitters!), lost in their thoughts and so on. Photography is more immediate (after careful preparation, of course!), and various expressions can be caught while the 'subject' and the photographer chat. It is intense and short, but a real intimacy develops – the only way for the photographer to catch what she is looking for.

Why portraiture? Because I love people – one by one, I am fascinated by their various destinies, by the simple courage of living one's life, whatever it is, with all its surprises (I read masses of biographies) and during the photographic session, I am in love with my sitter – I am him, or her! The saddest thing in our modern times is that people do not look at each other anymore – on trains, in restaurants, on streets, but are absorbed by their smartphones. They do not have any curiosity about other human beings. They forget that each being is a mystery, a whole unknown world, and it is a great pity! I rarely forget my sitters and the unique moment we shared – some became my friends.

People of all types. I was soon commissioned by the National Portrait Gallery to photograph famous women in 1977. Then, of course, I photographed artists with my husband – sometimes it was awkward because we had similar ways of shooting and we could not tell who thought of an idea first. My husband specialised in artists and landscapes – I worked for magazines on editorial articles about people of achievement.

Yes, a lot. I listen to the music of a composer, read at least one book of a writer, see an actor perform, read biographies, and so on. I want to avoid at all cost the sofa in a sitting room with the lamp above, which exist in every home. I think of a context relevant to the sitter’s activity, if not then, a blank background.

Anthony Gormley. And others, of course.

Black and white, if possible, but with digital it is not as rich in tones.

I had two important exhibitions in 2016 – one of black and white portraits (a sort of retrospective) and one in Toulouse called The Eye of Proust, which should be travelling and which I would like to bring to England. Mostly colour, because Proust describes landscapes in colour. He had an acute photographer's eye and loved photography. My pictures illustrate exact quotations from the seven volumes of À La Recherche du Temps Perdu, in French of course, but also in English (translation by C.K. Scott Moncrieff). I am very happy with the results, I must say.

This was taken for Harpers and Queen. Nadine was in London in the house of a friend of hers, so there was no relevance to her role in apartheid. So, I brought a white sheet and a black velvet sheet in order to simplify the background, whatever it would be. Then I asked her to hold her hands in such a way that one was lit by the side window and the other was dark. Her face was also dark on one side and pale on the other – a simple message, but difficult to read if one does not know about her. (NPG x138816)

My husband and I saw at once a broken mirror in Bacon’s bedroom and we both have good pictures with Bacon next to it. But I saw in his workshop an easel and saw it as a crucifix somehow. Bacon accepted the idea of being pinned behind it and the screw distorted his face like the faces in his paintings. My husband took many marvellous pictures of him over the years. (x138807)

Mayotte Magnus Photographer – A Snapshot of an Artist

The making of this video coincided with the hanging of the display Illuminating Women: Photographs by Mayotte Magnus at the National Portrait Gallery in London. The biographical film looks at how Magnus began a career in photography, the techniques she has used, significantly in making portraits, and her life in France and the UK.