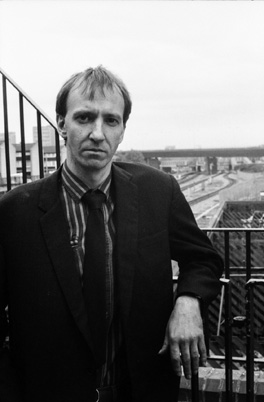 I began taking photographs at the age of eight, after my father gave me a Brownie 127 for Christmas. A keen photographer himself, he taught me to process film and print photographs every Saturday evening after supper.

The biggest influences on my work are the American photographer, Walker Evans, mostly for his purity of vision, and Man Ray, for his experimentation and inventive playfulness.

From an early age it was my ambition to be a doctor, but failing in maths, I entered social work with children, later becoming Principle Officer in charge of a psychotherapeutic unit in the Royal Borough of Kensington and Chelsea, supervised by Dr Derek Steinberg, Consultant Psychiatrist, Maudsley Hospital. I became a professional photographer in 1991, following publication of my book with George Melly, Paris and the Surrealists, [published by] Thames & Hudson, 1991.

The complexity of human relationships have been central to my professional working life, and portraiture, at least photographic portraiture, provides me with a microcosm to explore, distil, and discover the essence of these complexities and attempt to capture them.

The people I’ve most enjoyed photographing have been my two great friends, George Melly, and the film director, Nicolas Roeg. George for his lack of inhibition, flamboyant dressing-up, generous spirit and spontaneous acts of Surrealism, Roeg for his self-effacing charm.

Generally, I become friends and work with the people I photograph, making a variety of portraits of them over many years. I have photographed Nicolas Roeg for over thirty years, including in Venice where he made the cult classic Don’t Look Now, and George Melly for over forty years, up until his death in 2007.

I recently photographed John Julius Norwich, then the great film producer, Colin Vaines, but since buying her new album, Have You In My Wilderness, I’m utterly captivated by the young American singer, Julia Holter. She’s on my camera’s wish list.

Although I use colour for the media, my preference is always Kodak Tri-X Pan. For me, black and white produces a wider spectrum of colour than any colour film.

Presently, I’m working on a series of photographic collages on canvas, portraits I made of the French New Wave writer and film director, Alain Robbe-Grillet, exploring themes inspired by such films as Le Belle Captive, Last Year in Marienbad, and The Immortals.

Harry Diamond, 1986: The photographer, Harry Diamond, hated having his picture taken. When he finally agreed for me to make some portraits of him, he arrived at my studio in a state of anxiety. To calm him down, I plied him with whiskey and cigarettes, and generally relinquished control of the shoot for Harry to direct himself. Adjusting lights, the position and height of the camera, he even provided me with a brief about how he wished to be photographed. “Strong, hard, tough, and none of that effeminate nonsense”, he quipped, before taking a seat and striking a pose of what he believed to be a 1940s gangster. He was right, that’s exactly how he looked when I printed the negatives of the session, a ‘40s gangster, but there were a few pictures I took when Harry was leaving the studio, bidding me farewell by raising his hat, revealing that beneath his macho exterior, he was essentially a pussycat, albeit with claws. (NPG x196212)

Sir John Mortimer, Matthew Parris and George Melly, 2005: I was asked by Penguin/Viking Books to make a group photograph of John Mortimer, Matthew Parris, and George Melly, for their joint book launch at the Polish Club, South Kensington, 2005. George’s book was titled Slowing Down, a humorous memoir about the challenges of growing old, including a chapter about George and I visiting the dying Surrealist artist, Conroy Maddox, in the Royal Free Hospital, Hampstead. Saluting our comrade for one last time, we left Conroy to his inevitable fate, unaware that a year later, I would be in the role of nursing George through the ravages of lung cancer and dementia, up until his death in 2007. (NPG x199054)