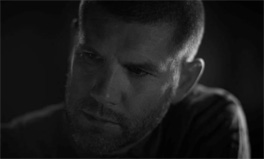 I studied a BTEC Media Studies course in the 1990s. Initially, I was interested in working in film and television, but photography seemed to have much more freedom and I liked the fact that I didn't have to rely on anyone else.

My photography lecturer was Yorgios Nikateas at Northbrook College in Worthing. He was obsessed with photo-journalism and his enthusiasm was very inspiring. Ideas come from everywhere. Sources can be literal, abstract. Vermeer and Rembrandt's use of daylight were big influences and Lucian Freud is someone I often look at. I like his unflattering realism and the psychology that exists between artist and model. Photographically, Richard Avedon, Diane Arbus, Magnum, Philip-Lorca diCorcia and Paul Seawright.

No, but it captured my imagination from the moment I got in the darkroom to print my first assignment. I was consumed by it and still am.

I find people fascinating and portraiture enables me to explore my curiosity – it gives me “a passport to be nosy”. I like the engagement with the subject. Primarily, that is the most important thing for me. A portrait is a version of truth. A camera can take a relatively realistic impression of likeness, but what it does exceptionally well is capture a moment, an atmosphere. However, creating atmosphere and capturing a decisive moment is difficult. I give a lot of thought to light and environment, but also to how my behaviour will influence the subject. Silence is a powerful tool. I definitely have a style. I can't escape it, but I'm revealing as much of myself as much as the sitter. This can be seen more clearly from a body of work than individual images, but my interpretation of the subject has a very strong influence on the photograph.

I'm very interested in the dynamic between photographer and sitter, and I particularly like photographing people with power. These individuals are used to being in control, but as sitters they are out of their comfort zone. Photographing Silvio Berlusconi was absorbing, and due to the language barrier, putting my hands on his shoulders to move him physically was interesting. Often, I'm not interested in making these subjects comfortable as this contributes to creating the atmosphere, and I love being in that space. I like to work in relative silence to heighten the mood and either the subject becomes impatient or enjoys the silence and this in itself can be revealing.

I like to know why I'm photographing a subject and want to see what they look like. Often, I know something about the sitter but if not, it is important for me to be informed. David Bailey once said that before a shoot he is infatuated by a subject, but I find the infatuation comes after. I think this is because prior to a shoot I want to see subjects as anatomical figures and retain an emotional distance while working. I want a clarity of thought and I feel immersing myself too much in a sitter could influence my process.

HM The Queen, certainly as she gets nearer to 100. Donald Trump, Vladimir Putin, Angela Merkel, Theresa May – people in power interest me.

I'm happy to use either – it depends on the situation and my mood.

I still love what I do and I want to continue to improve and finesse my craft. I would like to finish my Centenarian project of one hundred 100 year olds and am on the lookout for subjects! With continued increase in life expectancy, the Office for National Statistics (ONS) estimate there will be more than half a million people in the UK aged 100 by 2066. Living beyond 100 will become the norm for children born within the next generation. I am interested in the quality of life and general wellbeing of people living this long and to open a conversation about the consequences.

Steven Gerrard’s heroic performances for both club and country were my boyhood dreams. However, his career has been slightly tinged by disappointments with Liverpool and England and I feel my image depicts these regrets and his self-confessed doubt. (NPG x199402)

Peter Capaldi also has a lot of meaning for me personally. At the time, Capaldi had yet to appear on screen as Doctor Who, but his love and respect for the character was very evident. The concept was to show Capaldi's transition into the role through his costume and I imagined him changing in his sleeping quarters in an unseen part of the Tardis. Also, while editing the shoot I involved a 'Whovian' friend who, like many of its fans, see Dr Who as more than a science-fiction television show and as a programme that represents important and complex issues. My friend's empathy towards the character was informative and intriguing but above all, very touching. Subsequently, the image was included in the Taylor Wessing Photographic Portrait Prize exhibition at the National Portrait Gallery. (NPG x199028)