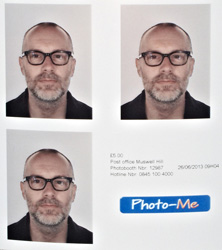 My first memorable image was taken when I was 8 on holiday in Portugal. There was a small train that transported tourists to the coast from our resort and I waited by the tracks to capture it as it went by. I remember the excitement as the train approached; me standing ready, camera up at my face, finger on the shutter. Months later when we finally got the films back from the chemist, there was no image of a train, just some empty tracks; in my excitement I had pressed the shutter too early. This is increasingly becoming my favourite photograph of my career. A lot of my images walk a fine line between success and failure which is enthralling and it still is. Even though my work is very constructed, there is still always a moment to be caught or missed.

Early influences were the classic photographic portraitists Bill Brandt and Irving Penn, since then Sally Mann, Joel Peter Witkin; more recently Wolfgang Tilmanns (essential) and my most important influence, mentor and friend Boris Mikhailov, who I consider far away the greatest photographer of the 20th century. The painter Otto Dix in an important inspiration.

My background as an adopted child has been the most important influence. I have always been aware of an alternative reality running parallel to the great life I was gifted and this ultimately has inspired a never to be resolved exploration of other people's lives, relative to my own.

I have always taken photographs, my father set up a dark room in the bathroom and had some equipment. I took this over with a passion and I haven't thought of anything else since. I still have a passion for making progress as a photographer, I often feel that one life time is not enough to achieve what I want from the medium. There is an excuse to intrude into other lives with a camera, which I learned quickly that I loved, you can observe someone in great detail in the moment and privately afterwards; every pore (both physically and emotionally).

I define enjoyment by the level of success achieved in creating the final image. I have some pre-conceived notions of what I might like to achieve but with more experience I am increasingly ambivalent about what might come from the relationship with another person. My time with David Lynch was hugely stimulating and the results still are very valuable to me as my first experience of an ideal commission. In fact a lot of my favourite portraits are of artists, I currently have a large and growing archive of Grayson Perry, one of which was recently acquired by the National Portrait Gallery. My time with non-celebrity or 'real people' is always hugely valuable; there is a less honed expectation of how to be perceived by the camera, which brings an immediacy and honesty to the images. Children are the most open, their emotions are inevitably on the surface and there is a huge range of expression that can be explored. Teenagers equally are wonderful, their conflict between adult and child and the struggle to define identity is visceral.

When I was asked to photograph David Cronenberg for the Telegraph magazine, I knew I had a very narrow window of time in a very boring hotel to get a definitive image. I embarked on a Cronenbergian festival, immersing myself in his movies. I was attempting to become closer to him in my very nature so that I could persuade him to do one simple but unusual act for the camera. I had no plan B, it was either going to be a potentially great image or nothing. As I watched his films, a strange painful lump appeared on the bottom of my foot and it became increasingly impossible to walk; days before the shoot I was using a crutch, I felt like I was morphing into one of J.G. Ballad's characters from Crash. At the sitting, I was fully possessed with the Cronenberg gene and asked him quietly to put his fingers in his mouth and show me the inside of his mouth. He did this silently for three frames. This image is in the collection of the National Archives of Canada.

Everyone is potentially a valuable portrait but I would like to continue to explore the most vulnerable and the most successful members of society equally. Artists are interesting; one can use the nature of their work as a backdrop to place them within. I have a portrait of Antony Gormley at his London Studio, towering over the lens in white overalls like one of his statues moulded from his own body. I have an idea for Damien Hirst inspired by some Philippe Halsman prints I have just bought of Andy Warhol. Others on the bucket list: Jeremy Deller, Marc Quinn and Tracey Emin is an interesting crossover between both worlds but I am not sure if she would do as she was told.

This is like asking an atheist if there is a God. It is 2014, there is no discussion.

I am following multiple lines of enquiry and developing new ways of interpreting, trying to evolve as a person in my life experience and education so that I can continue to see the world in fresh ways and continue to take photographs in a new, valuable and genuine way for me. I hope there will continue to be those that see something of value in what I am doing. I am very grateful for the support from many people.

Grayson Perry, 18 September 2013: Ladies first. The stars seemed to align perfectly for this portrait. As usual I was under huge time constraints, this image was taken moments before Perry (as Claire his alter ego) was about to deliver the first BBC Reith lecture in the Starr Auditorium at Tate Modern. This was my first encounter with the artist, who I have since worked with many times. There are so many images of Perry, especially as Claire but I wanted to bring a less frivolous more serious approach to the representation of him as an artist. He is rather playful, impish even, hugely intelligent (relatively) with a great knowledge of art. In terms of the photograph itself I am thrilled this has been recognised, it is 'very me.' (x139888)

Alastair Campbell and Peter Mandleson, February 2005: It was a remarkable coup to get these two towering figures of the New Labour government in the same room, even if it was just for a few minutes. There was no love lost between them it seemed, Campbell presented himself predictably as the bullish, alpha male and Mandleson, brilliant, quieter more effeminate in comparison; both equally powerful. They were dismissive of my presence and I had to assert myself to gain their attention; Campbell rejected any attempts at direction in anyway but I had two tea cups ready; I thrust them into their hands and very directly demanded their attention, producing this rather startled expression at my lack of respect. I don't believe there is another unsanctioned formal portrait of these two. It was selected for the Schweppes Portrait Prize. (x131415)

Andrew Gilligan, 2010: I had arranged to meet Gilligan outside an East London Mosque but he didn't show. I called him a few times and eventually he picked up and explained that he had the flu and wouldn't be able to make it. The client needed something to go to press with the next day so I asked him if I could pop over to his house and grab a quick headshot. When I arrived I was greeted with this chaotic mess of sugary drinks bottles, sweet wrappers, books and newspapers strewn over his lounge. This would never have been exposed if the shoot had been arranged with any notice. In the corner of the frame is a book titled 'The Country Formerly known as Great Britain' by Ian Jack. I was struck by how important he had been in the terrible story of Dr David Kelly and the final downfall of the then Labour government. (x133310)