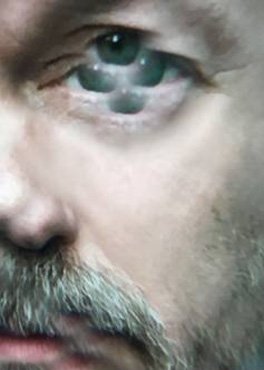 I started very late, in my early twenties. I had little formal interest in the visual arts, having dropped art at [the age of] eleven and studied the sciences both at school and university; looking back it seems a crime that it’s even possible for any child to do this. That being said, I was obsessed with television from a very early age, so seeing life through a frame must have become second nature by osmosis. I picked up a camera out of boredom when recovering from an illness and that feeling of framing just made sense, looking through the viewfinder was a revelation. I suppose in hindsight, being able to control what I could see, and perhaps more importantly what I shut out, was a way of controlling my world and my reaction to it. The rest of my career has been luck and a lot of hard work that enabled me to grab chances when they appeared.

I was hugely influenced by some of the people I assisted, in particularly Glen Luchford, David Sims and Corinne Day, not just in terms of their own work, but in opening my eyes to the greats. Not having been formally trained I had no sense of photographic history, so seeing the work of Edward Steichen, Alfred Stieglitz, Edward Weston, Paul Strand, Irving Penn, Richard Avedon, Garry Winogrand, Lee Friedlander, Helen Levitt, Robert Frank, Lewis Baltz, Harry Callahan, Erwin Blumenfeld and Man Ray, amongst so many others for the first time just blew my mind.

Not at all, it was completely by accident. After I first started taking pictures I had a friend whose boyfriend at the time was an assistant, and I asked him if I should go back to university to do a degree in photography and he advised me that if I could worm my way into the business somehow I’d learn more in the first week than at university, and would have to start at the bottom either way. So I just phoned every photographer in London that I could find a number for, and eventually the assisting work just came. I’ve found that dogged perseverance is everything.

I love the fact that with photographic portraiture the final result is something that happens between you and the sitter, often on a sliding scale of collaboration. At best, I think the photographer creates an atmosphere of trust and involvement that allows the sitter to give you a gift, something that reveals something and that can evoke some sort of emotion from the viewer. Ultimately, the success or failure of any photograph is in the viewer’s hands, but during the shoot that exchange can be transcendent.

Without a doubt, Edward Watson, Principal of The Royal Ballet. He is the most humble and giving of sitters, as well as being one of the best and most versatile dancers of his generation. He will freely offer up his spirit and his vulnerabilities, and I can barely breath when photographing him.

It’s only common courtesy to know a little about your sitter, so I don’t research sitters with a photographic eye, merely on a human level.

Too many to mention, but the other part of the job that is thrilling is to have anyone who is the best in the world at what they do, doing that right in front of you, and trying to capture some aspect of that is the incredible.

I have no real preference, it’s more a case of what best describes your intention. The technique, style or equipment used must, I feel, always serve the subject.

Who knows? The one thing a freelance photographer can rely on is the unexpected. I intend to carry on photographing performance artists of every kind, and am presently in discussion with The Royal Ballet about a project photographing their students from the age of eleven over the next ten years, as a time based typology, as well as working on a book celebrating Edward Watson.

I photographed Tamara Rojo in June of 2015 for this portrait. At this point in time she was not only the Lead Principal at the English National Ballet, but the Artistic Director, two massive roles within the same company. Her indomitable spirit and athletic prowess coat both a sharp and thoughtful mind and an emotional heart, and it was this more introspective and vulnerable interior that I wanted to reveal. Having discussed this with her we began, and slowly over time, the Spanish bull that she can so embody at times, slowly receded and she gave me the gift of seeing this more sensitive and vulnerable side of herself. (NPG P2020)

I have photographed Edward Watson, Principal of The Royal Ballet, many times, and each and every time he surprises me, either with his incredible physicality, his generosity or his raw emotion. This series comes from an exhibition entitled ‘What Lies Beneath’, an attempt to separate the dancer from the role, costume and the stage on which their art deliberately conceals the effort it takes to create it. I discussed with all the dancers both the sacrifices they make to their art, and the defiant spirit that overcomes all the emotional and physical extremes they endure, to become the best at what they do in the world. Edward was generous enough to offer me up his feet, a source of pride and shame for any dancer and a physical manifestation of all the hardship in a dancer’s life. He is the most incredible dancer and singular man, and as with all my sitters, I am in his debt. (NPG P2023)