Introduction to the Reference Collection 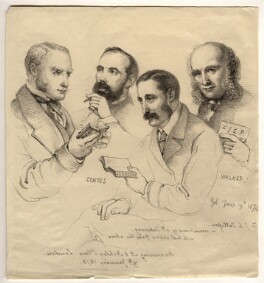 The Reference Collection is held in the Archive and Library and contains more than 80,000 portraits of important and lesser known figures in British history.  The majority of these portraits are prints, but the collection also includes drawings, silhouettes, caricatures, paintings, miniatures, medallions and related items.

Handlist of the Reference Collection holdings

The Reference Collection owes its origins to the first Director, Sir George Scharf, who filled over 200 sketchbooks with meticulous pencil drawings of portraits held in private collections and acquired large numbers of portrait prints in order to build up an iconographical resource for the Gallery. These images were collected to provide visual evidence for the existence of portraits and to record the likenesses of specific people. Over the last 150 years the collection has grown into a national resource that includes a significant number of original portraits and substantial holdings of prints by notable printmakers.

The range of work held in the Reference Collection complements the Gallery’s Primary Collection of portraits and contributes to a better understanding of British portraiture generally.   Examples of preparatory studies and working drawings record the process of making portraits and extensive holdings of engraved reproductions of portraits provide evidence for their distribution and consumption. The wider more popular appeal of portraits is represented by popular prints, silhouettes and the work of enthusiastic and talented amateur artists. Caricature and satirical prints represent a distinct branch of portraiture and provide an alternative and less reverential view of sitters that contrasts with more conventional portraits. 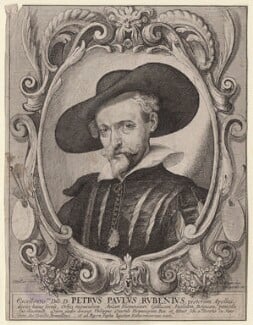 Among the print collection are holdings of work by several notable 17th century print-makers, including etchings by Wenceslaus Hollar and a near complete set of line engravings by the important English engraver William Faithorne. Also well represented are early mezzotint printer-publishers, including a very fine and near complete set of the published work of Alexander Browne and the most comprehensive single collection held in this country of prints by John Smith, who the leading exponent of the medium.

There are significant holdings of 18th and 19th century prints, among which are a large group of soft-ground etchings by William Daniell after portraits by George Dance. The prolific Victorian lithographer Richard James Lane is represented by a substantial collection of portraits and figure studies, including a separate tinted set of lithographs after drawings by the amateur artist and dandy Count Alfred D'Orsay. Notable among the holdings of important 20th century prints are original etched portraits by Francis Dodd and William Strang.

The fashion for collecting portrait prints and extra-illustration, which began in the 18th century, is represented by several substantial sets, most notably by Granger's A Biographical History of England from Egbert the Great to the Revolution which was extra-illustrated by Dr William Fleming in the 19th century. This tradition continued into the 20th century and more recent compilations include The Diaries of Fanny Burney extra-illustrated by Frederick Leverton Harris and an illustrated edition of the Dictionary of National Biography assembled from the vast print collection of J.H. Macdonnell. 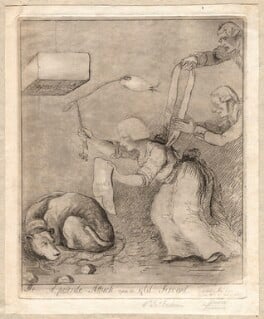 The Reference Collection is rich in satirical prints and caricatures, outstanding among which is a fine set of hand-coloured etchings by James Gillray and an album of political satires by his contemporary James Sayers. A less harsh view of the Regency period is provided by the profile portraits produced by members of the Dighton family, one of the most notable artistic families of the period. The Library holds sets of prints published in a number of 19th century satirical magazines, including a near complete set of the little known The Period and an extensive collection of prints from Vanity Fair.

The satirical prints are complemented by several collections of important late 19th and 20th drawings, including pen and ink caricature portraits by Harry Furniss and character studies by Sir Leslie Ward who worked for Vanity Fair under the name 'Spy'.  The Reference Collection also contains the sketchbooks and working drawings of 20th century caricaturist Powys Evans ('Quiz') and a group of original cartoons by Sir Bernard Partridge drawn for Punch between 1902 and 1942. Other notable 20th century cartoonists and illustrators represented include Anthony Wysard and Robert Sherriffs.

The drawings collection includes holdings that document the working practices of artists.  Notable among this group are the squared up pencil drawings by the early 19th century enamellist Henry Bone, several albums of ephemera covered in impromptu portrait sketches by the artist Fred Roe, and the 'television sketchbooks' kept by Cecil Beaton towards the end of his life. The renowned Victorian amateur painter Louisa, 3rd Marchioness of Waterford, is represented by a small watercolour sketchbook that depicts domestic scenes at Highcliffe Castle. 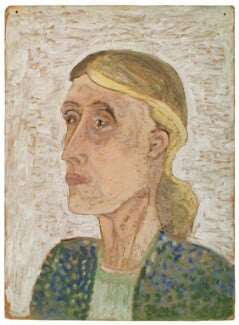 The Reference Collection contains very few painted portraits, but worthy of note is a group of oil portraits painted by Rachel ('Ray') Strachey during the 1930s that depict friends and family from the Bloomsbury group.

The popularity of silhouettes during the 19th century is represented by a small but select collection that includes examples cut by the important French silhouette artist Augustin Edouart, who travelled extensively around Britain and the United States. 20th century holdings include a collection of full-length silhouettes by Hubert Leslie, one of the most prolific cut-paper artists during the first half of the century and who worked on Brighton's West Pier between the wars.

Medals and other media

Other forms of portraits represented in the Reference Collection reflect the diversity of media that has been used to carry a likeness, and include medals, miniatures, seals, medallions and death masks. Of particular note among these are two sets of medals depicting prominent artists and architects commissioned by the Art Union in the 19th century for distribution to its members and a small group of mid-20th century plaster cartoon figures ('sculptoons') by Geoffrey Davien.