James Gillray (1756-1815) was born in London, the son of strict Moravians; an austere, reformed Protestant sect which promoted bible reading and continual contemplation of death. After a brief apprenticeship to an engraver of calligraphy, in 1778 he became a pupil at the Royal Academy Schools where he was taught by Francesco Bartolozzi, the most fashionable engraver of the day. For a short period after leaving the Academy, Gillray attempted to forge a career as a serious reproductive printmaker. Despite his considerable technical skills, it soon became apparent that his real talent lay in art of caricature.

Hung in the windows of city-centre shops or displayed in coffee houses and taverns, satirical prints enjoyed a wide audience in Britain by the late eighteenth century. The public passion satire combined with an array of inviting subjects - forms the excess of the Royal family to the divided political scene - gave Gillray the perfect environment in which to launch himself as a caricaturist. After a brief struggle between rival publishers keen to represent him, from 1791 Gillray chose to work almost exclusively for Hannah Humphrey, a spinster with a shop on London's fashionable Bond Street. Humphrey allowed Gillray complete creative independence. In turn the rights to his work secured her prominence amongst West End print – sellers. Gillray’s works was clearly more sophisticated than the output of many of London’s jobbing satirists but he did have rivals. Competition was intense and a capacity to produce prints at a great speed was essential. One of Gillray’s main competitors in the early days was James Sayers (1748-1823) He was on the pa of the Tory William Pitt and became well known for his Lively use of personal caricature, most notably against the opposition leader Charles James Fox. Thomas Rowlandson (1756-1827) was another important rival and friend, but he was not partisan and satirised both political parties. 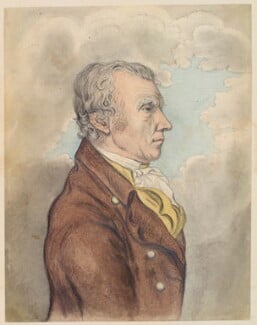 Gillray’s prints were aimed at an educated, wealthy audience and, at around three shillings each, they were not cheap. The Prince of Wales opened the account at Hannah Humphrey's shop in July 1803 and was a keen collector of Gillray's work. The Whig Mp Charles James Fox and the dramatist Richard Brinsley Sheridan were also customers. Inclusion in a Gillray caricature became a mark of political and social success.

After the turn of the century, however, Gillray's world began to disintegrate. The mainstays of his political caricature - Fox and his arch-rival Pitt - both died in 1806. George III's dementia was publically admitted in 1810 and Gillray himself soon descended into insanity. He was cared for by the ever-loyal Mrs Humphrey until he died in 1815.