Warren Hastings, Governor-General of India, was the subject of an impeachment and trial after his return to England. The procedure was lengthy, the trial itself commenced in 1788 with Hastings only being found not guilty in 1795. The political-banditti assailing the saviour of India (D1360), published in 1786, anticipates the trial. Gillray shows Hastings in a straightforward portrait, albeit wearing eastern dress and mounted on a camel. Edmund Burke, Lord North, and Charles James Fox, his leading opponents, are by contrast heavily caricatured. As well as corrupt self-enrichment, represented by the money bags in Political Banditti, Hastings was accused of physical oppression of Indians. 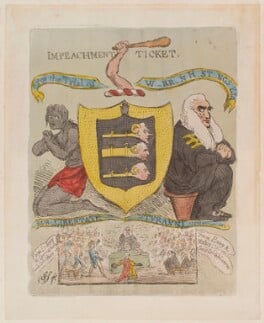 'Impeachment ticket. For the trial of W-rr-n H-st-ngs Esqr'
by James Gillray
circa February 1788
NPG D12943 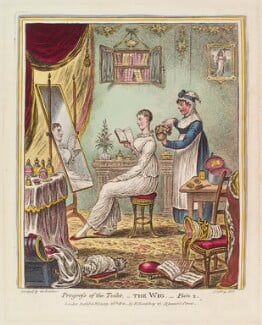 'The graces in a high wind'
by James Gillray, published by Hannah Humphrey
published 26 May 1810
NPG D12947 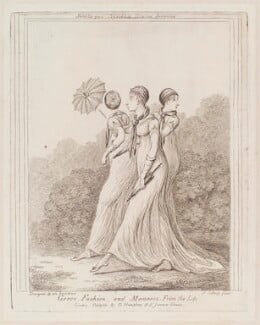 John Philpot Curran ('The master of the scrolls')
probably by James Gillray, published by McCleary
published circa 1809
NPG D12951