When one of the Gallery's Trustees, Claire Tomalin, met with A.S. Byatt in 1994 to discuss possible artists for a portrait, she indicated that she would like Patrick Heron to undertake the commission, as an admirer of his much earlier semi-cubist image of T.S. Eliot in the Gallery collection. 'You do want an abstract portrait', Heron asked, when Byatt met him for lunch to discuss the idea. This was indeed exactly what she wanted, what the artist described as 'a painting which is also a portrait'.

Later A.S. Byatt recorded an interview for the Gallery audioguide interview, 'I think there were two reasons why I wanted an abstract painting. One is that I do not like looking at images of myself, the second reason is because I don't like, to be truthful, most representational portraits I see nowadays. What I wanted was the presence of the idea of me, not of a record of the whole of my face that I don't much like.' 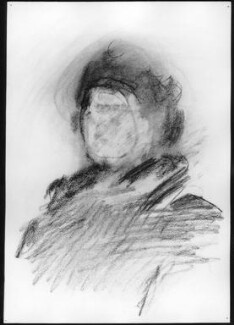 The portrait was the result of three visits to Heron's St Ives studio in Cornwall, and was completed shortly before the artist died. On Byatt's first visit in March 1995, she sat down to be drawn on the last evening: 'I recognised an anxiety before the blank paper which corresponds to the writer's anxiety before the blank page - only in the case of a portrait, this anxiety is doubled, both sitter and artist are anxious.' But a drawing did result from this sitting. A further visit took place in June 1996 and a final one, accompanied at her suggestion by the Gallery Director, Charles Saumarez Smith, followed to the artist's studio in September 1997.

Much work was then done over three days and at the end the portrait was completed quite suddenly and decisively, as Byatt has recounted. 'When it was finished, I did not know what to think for a moment. We both stared. I had a curious experience of it settling into shape, becoming itself, as I looked at it. The energy, the brashness, the uncompromising splashes of primary colour represented what I had wanted in an abstract portrait by a great colourist. But they represented something else as well. They were a painting of the writer, of how I feel when I start work, a vanishing, watching body in a sea of light and brilliance.'

Commissioned by the Trustees, 1995