Sitter in 1 portrait
Born in Marseilles, France, Wyngarde appeared in many popular television series during the 1960s, including The Avengers (1966-7), The Saint (1966-7) and The Prisoner (1967). However he is best known for his lead role as Jason King in television series Department S (1969-70) and Jason King (1971-2). Following an arrest in 1975, Wyngarde's career never fully recovered, later appearing in small television roles, such as Timanov in Dr Who (1984) and Langdale Pike in The Memoirs of Sherlock Holmes (1994). 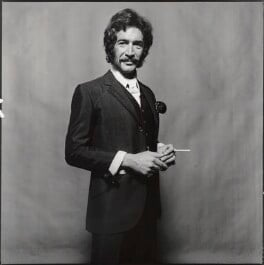 Just to confirm, the author of the previous comment now agrees with you about Peter Wyngarde's date of birth. In her 2020 biography of Wyngarde, Tina Wyngarde-Hopkins (formerly Bate) gives his date of birth as 28 August 1928, not 23 August 1933 as she stated here in 2016.

To be fair, Wyngarde appears to have created a false back story when he arrived in the UK in 1945, and eventually appears to have come to believe it himself. The biography confirms that his oft-repeated account of his father being a diplomat was also false, that his father Henry Goldbert was in fact an engineer in the merchant navy, and that Wyngarde's birth name was Cyril Goldbert. Wyngarde claimed until his dying day that all these facts were false and that he was unrelated to the Goldbert family. The author had previously colluded in this fiction (hence the comment above) until eventually correcting them in the biography.