Sitter in 1 portrait
Artist of 8 portraits
Born in Philadelphia John McLure Hamilton was known for portraits, figure paintings, and illustrations. Hamilton studied at the Pennsylvania Academy and then went to Europe where he studied in Paris at the Ecole des Beaux Arts and at the Royal Academy in Belgium. He lived in Europe, mostly in London, for almost sixty years, and was official painter to William Gladstone, prime minister. 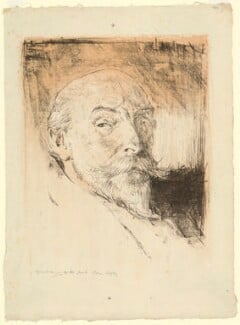 Obituary of John Mclure Hamilton is as follows:

John Mclure Hamilton is dead, at 83.

From Jamaica came yesterday the tidings of the death of one of the most gifted artists Philadelphia has given to the world--a painter whose portraits of Gladstone and of Cardinal Manning, of George Meredith and Colonel Edward M. House, of General Booth and of his brother artist and intimate friend, Joseph Penell, and of many another famous man, were as vivid in interpretation of personality as they were masterly in use of brush and pigment.

Death came to him Wednesday night at Mandeville, Jamaica. Some years ago he and his wife had left England - their home for half a century---to be with their son, George, an astronomer, at the conservatory in the mountains of Jamaica. The son died. The artist lingered on in Jamaica, almost blind, almost deaf, and in necessitous circumstances, for all the fame that he had won and friendship of the great.

It was early in his career that Hamilton left his native Philadelphia. He was born there January 31, 1853, son of Dr. George and Caroline Delaplaine Hamilton. He was graduated from Central High School. After being trained as a painter at the Pennsylvania Academy of Fine Arts he went abroad for further study at the Royal Academy in London, in Antwerp, in the Ecole des Breaux Arta in Paris and at the Jerome Atelier there.

He made his home in England from 1878 on. Portraits that he painted won the distinction of being bought by the French Republic to hang in the Luxembourg Gallery and by the British Nation to be hung in the National Portrait Gallery. In the Pennsylvania Academy of the Fine Arts are his celebrated "Gladstone at Hawarden" and a number of other works."