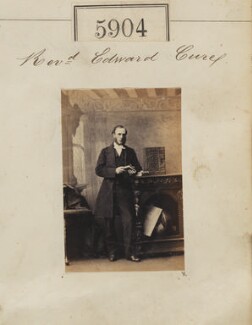 The Revd Edward Capel Cure was a prolific author of inspiring, meditative books about Christianity and questions of faith, and some of his books are still in print today. He was also a talented musician composer and close associate of Elgar. I also found his family line, with a current family contact. Please see below:

And some of his books, as listed on Amazon:

Sudden Death: is it to be deprecated? A sermon preached ... on the occasion of the death of ... the Duke of Marlborough, etc
by Edward Capel Cure and John Winston Spencer Churchill | 1 Jan 1883

His music and association with Elgar:

The Light of Life, also known as Lux Christi, was composed and first performed in 1896. Elgar made extensive revisions of the solo parts for a performance three years later in 1899. At that time Elgar was preparing to write his masterpiece The Dream of Gerontius, and some of the genius of that score was clearly reflected in these revisions. One critic found them "all the easier and more effective...though one still feels that the composer has more sympathy with his instruments than with his voices."

The Light of Life is based on the story of Jesus's miracle in giving sight to the blind man, as told in St John's Gospel of the New Testament. It was written for the Three Choirs Festival at Worcester in 1896. Novellos accepted both Lux Christi and King Olaf (also first performed in 1896) for publication but asked that Lux Christi be kept to under an hour in length. They also expressed concern about the Latin title, lest an Anglican cathedral might worry about Catholic bias. Elgar suggested the title The Light that Shineth, but accepted Novello's suggestion of The Light of Life.

Elgar, at this time, was on the threshold of greatness. The Enigma Variations and The Dream of Gerontius were only three and four years into the future. Behind him were two considerable choral works: The Black Knight, of 1893, and King Olaf which was also composed and first performed in 1896.

Lux Christi as a subject, was suggested by the Reverend Edward Capel-Cure, who had played chamber music with Elgar while he was curate of Holy Trinity in Worcester. He developed the libretto, which utilises direct quotations from St John, interspersed with original stanzas to provide a broader basis for musical set pieces.

The work was first performed on 8th September 1896 in Worcester Cathedral. It was well received but some criticism was aimed at the libretto. Writing in the Worcester Echo, Edward Vine Hall, precentor of the Cathedral, and also a conductor, singled out the words Hadst Thou a son, O Lord in the Mother of the Blind Man's solo as "somewhat deficient in reverence". Capel-Cure was reluctant to revise the passage, but did so upon intervention from Elgar. The Light of Life is indeed an uneven work, but the many moments of greatness tip the balance against the few weaker passages.

The work begins with an orchestral prelude, Meditation, setting out the main themes of the work. Elgar used the Wagnerian principle of leitmotives in his major choral works - themes used in association with the main characters, or with special moods or circumstances. Meditation introduces us to a number of these themes, including those associated with the Levites opening chorus, the blind man's prayer, Christ the healer and consoler, and the Light itself.

The Light of Life was intended to be the prelude to the uncompleted trilogy of New Testament oratorios which occupied Elgar in the first six years of the new century - that is, The Apostles and The Kingdom. Right at the beginning of The Apostles there is a reference back to The Light of Life when in the opening chorus, The Spirit of the Lord is Upon Me, at the words 'and recovering of sight to the blind' we hear the theme that we first heard in the Meditation of The Light of Life.

The Meditation merges with the opening Chorus - Seek Him that maketh the seven stars and Orion - in which the Levites within the Temple Courts are giving thanks unto their Lord for His mercy, and for the gift of the sun to rule the day, and the moon and stars to govern the night.

As the Levites sing their hymn, we hear the Blind Man (the tenor soloist). He is outside the Temple praying for light:

"All, all is dark to me...
Lord, grant that I may see"
As Jesus passes by, his disciples ask him who has sinned that the man was born blind, for it was believed that evil-doers would be thus cursed. In a soprano solo, the mother recalls her son's conception in sin, yet she cannot believe that such circumstances should be punished by blindness. She appeals to Jesus:

"Blinder than my own blind child are they:
And blind am I."
"Lighten mine eyes O Lord,
That I may learn Thy love's mysterious way".
This solo is distinguished by some very fine and complex string writing and decorative woodwind.

Jesus replies that "neither has this man sinned, nor did his parents" and that "I must work the works of Him that sent me". In this inspired baritone solo, Jesus goes on to proclaim: "As long as I am in the world, I am the Light of the world". Notice how Elgar treats the role of the Saviour, virile and not at all sanctimonious.

There follows a chorus which begins grandly in Elgar's noblimente style - Light out of Darkness. Elgar said, "I thought a fugue would be expected of me. The British public would hardly tolerate oratorios without a fugue. So I tried to give them one. Not a 'barn door' fugue but one with an independent accompaniment. There's a bit of canon, too, and, in short, I hope there's enough counterpoint to give the real British religious respectability!"

Jesus then anoints the eyes of the blind man with clay and instructs him to wash in the pool of Siloam. A fine Women's Chorus then tells us Doubt not thy father's care, for He answers every prayer.

The blind man washes away the clay and the miracle occurs off-stage. We next see him amongst his neighbours. They are astonished when he tells them that he has been given not only sight, but also insight into Heavenly grace. He tells them how the miracle happened in this rapturous aria. Notice how Elgar uses the orchestra so evocatively to convey the working of the miracle as the blind man recalls it in his aria As a spirit didst Thou pass before mine eyes.

But when the blind man is brought before the Pharisees and they hear about the miracle, they are outraged that this act should be performed on the Sabbath Day. They call Jesus a sinner, to which the one who was blind asserts, No, he is a prophet.

We then hear from the narrator. Elgar employs, most unusually, a contralto in this role, and sings her moving solo:

"Thou only hast the words of life.
Be prophet to my heart O Lord"
...
"Make a silence in my soul,
Where only Thy true voice shall sound."
But the Jews do not believe that the man could have been blind until his parents assure them. The Jews persist in thinking the blind man was a sinner but realise that God should be praised. The Mother of the Blind Man together with the women's chorus admonishes them. It is interesting to note that consistently throughout Lux Christi, the male choruses are presented as the doubters, whereas the women are always strong in their faith. One of the highlights of Lux Christi must be this lovely number for soprano solo and chorus:

"Woe to the Shepherds of the flock,
Ye have not healed that which was sick,
ye have not sought what was lost.
Therefore hear ye the word of the Lord.
I will require my flock at your hands.
I will seek out my sheep and will deliver them."
Jesus, upon hearing that they had cast out the man who had been blind, comforts him and assures him that he, Jesus, is the Son of God. In this aria, I am the Good Shepherd, Elgar's inspiration is truly aflame. The sublime passage beginning "Father, I will that they be with me" foreshadows the very best of The Apostles and The Kingdom.

The Light of Life ends with another big chorus written in the grand English choral tradition - Light of the World, we know Thy Praise.