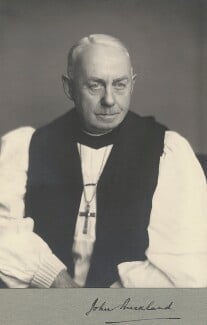 When William John Simkin was admitted to Ellesmere College in May 1896 it almost certainly never crossed his mind that he would spend most of his life in New Zealand, that he would become Bishop of Auckland or that he would merit a large entry in “Who’s Who”.

He was the eldest of four children and was born on 15th June 1883 in Rugeley, Staffordshire to William Butler Simkin, a solicitor’s clerk, and his wife, Lucy Elizabeth. He had one sister, Annie, and two younger brothers, Charles and Ernest. His father worked at a solicitor’s office in the town for sixty two years before he finally retired! For the five years prior to his admittance to Ellesmere, William was educated at the Prince of Wales School, Rugeley. Misfortune struck the family in 1894 when their mother died.

William only boarded at Ellesmere for four terms and there are very records of his time there. He was initially placed in Form Lower I under the tutelage of Mr. C. D. Penn, himself and Old Ellesmerian and sat his Preliminary Oxford Local Examinations in his last term. He was successful in Religious Knowledge, English History, English, Geography and Mathematics. During his time at Ellesmere he was a contemporary of several of the Harvey brothers who arrived at Ellesmere at the end of the 19th Century and “who were the most outstanding, and by far the ablest family group educated at this school”. They remained friends for the rest of their lives.

William had just celebrated his 14th birthday when he left Ellesmere at the end of the summer term 1897. It is not known if he went on to any form of further education but the 1901 census recorded that he was 17 years old, single and employed as a solicitor’s clerk at Horsefair, Rugeley. A legal life obviously did not satisfy him and by 1908 The Ellesmerian was reporting that he had achieved “First Class in the preliminary examination for candidates of Holy Orders”. A life in the church beckoned and his first curacy was at Christ Church, Stafford. He would later recall, in letters to the Editor of the magazine, how he discovered his faith at Ellesmere. He wrote on one occasion: "I cannot tell you how often over the years my thoughts have turned to the school chapel, not the present beautiful building of course, but the Crypt. It was there that I first discovered my vocation to the Ministry and naturally I look backward to it with love and gratitude. I often think of the Divinity lessons taken by Stevens, the Chaplain, and especially in the vestry where we learnt inter alia Herbert’s ‘Church Porch’. The Chapel was the beginning of my religious life and I could wish no greater blessing for our boys than that the new Chapel should be as beautiful as possible . . . may it be the inspiration which the Crypt Chapel was to me in the early days”.

William studied at Lichfield Theological College and was awarded a Licentiate in Theology. He was ordained Deacon and then priest in 1908 & 1909 and then immigrated to New Zealand in the spring of 1911 where he served as Vicar in Wairoa until 1918. During this time he served as a Lieutenant in the New Zealand Territorial Forces whilst also fully immersing himself in the local community. He served on the Wairoa Hospital Board as a member and Chairman and held similar positions on the Wairoa School Committee.

On 5th June 1919, at a service taken by the Bishop of Waiapu, William married Florence Emberton, who herself was born in Stafford, at St. Luke’s Church, Rotura. They never had any children.

Remaining in the diocese William went on to take on the positions of diocesan treasurer, secretary and registrar before, in 1926, moving to Auckland where he would remain for the rest of his life visiting England on only two occasions to attend The Lambeth Conference. On each visit he found time to return to Ellesmere and, in the summer term of 1958, he became the first Old Ellesmerian to be invited to present the prizes on Speech Day.

In the diocese of Auckland he took on similar positions and also served as Archdeacon of Manukau. He became a prominent figure in the diocese and the province as a whole. During the early years his association with St. John’s College started and he served on the Trust Board from 1926 – 1940. He filled the roles of President and Chairman of The Board of Governors from 1949 – 1960. One biographical note on him states: “He has been described as having a “proprietorial attitude” towards the College. This is partly explained by understanding of his duties as a bishop. He took a personal interest in recruiting students, often from King’s College. The Simkins, who had no children, “adopted” a number of young men and were generous in their hospitality. Although not a university graduate himself Simkin encouraged many of his ordinands to obtain university qualifications as an academic preparation before seeking ordination. He was in favour of changing St John’s into “a purely theological college” and no longer acting as a university hostel as well. Simkin had a powerful influence on shaping the financial prosperity and development of St John’s College. When he retired in 1960 the Warden referred to the “unremittent and stintless” help he had given to Warden and staff”.

In June 1940 he was consecrated the fifth Bishop of Auckland and he laid the Foundation Stone of the Holy Trinity Cathedral Chancel on 13th June 1957. The stone itself was sourced from his home county of Staffordshire. William retired in 1960 at which point he moved to Taupo. He died in Rotorua Hospital on 8 July 1967, aged 85. At his request he and his wife were both buried at St John’s College, alongside the entrance to the Chapel. His epitaph sums up his relationship with the College: “With diligence and ability he pursued the objectives of the founder of the college”.

William remembered Ellesmere in his will and the bequest was used to make two major improvements. The Ellesmerian (October 1976) reported that Big School 1 Classroom was “refurnished as a Divinity Study Centre with the facilities for visual and aural aids, and also with rather more comfortable chairs; secondly we were able to purchase some new vestments for the Chapel which were much needed. The setting up of the Simkin Room has, in fact, coincided with an expansion in the number of boys who are considering possible vocations in the priesthood”.