Sitter in 1 portrait
The wife of a wealthy Chinese Merchant in Foochow, Mrs Ahok and her husband were devout Buddhist before converting to Christianity. Mrs Ahok studied the bible to improve her English under the supervision of Miss Foster, a missionary who worked with the Society for Promoting Female Education in the East. She gained a good understanding of both English and the principles of Christianity during this time, becoming good friends with her teacher. She later, with her husband's blessing, accompanied Miss Foster back to England, when her friend's health was ailing, and was invited to speak about Christianity in China. She left England when she heard of her husband's ill health but he died before she reached him. She stayed devout in her Christian convictions despite Chinese friends and family suggesting that her husband's death was punishment for her deserting her Chinese gods. She continued her missionary work giving over 100 Bible presentations, inspiring many young women to become missionaries in China. 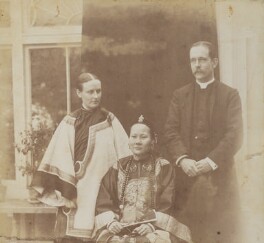 Mrs Ahok was the wife of a wealthy Chinese merchant in Foochow, a woman of high rank being the sister of a Mandarin. She was previously a devout Buddhist who, under the guidance of a Miss Foster of the “Society for Promoting Female Education in the East” had been using the Bible as a reference book to improve her English. She eventually followed her husband to become a convert to Christianity, despite the opposition of both their families. Mrs Ahok and Clara formed a close friendship. She accompanied Clara back to Ireland and then England, conducting over 100 presentations on Christianity in China, and these talks and her presence inspired numerous young women to become missionaries.
Sources and references:
• Burton, Margaret E. (1912) Notable Women of Modern China Fleming H. Revell Co., London
• C.E.Z.M.S. (1930), “Mrs Ahok in England”, from the Church of England Zenana Society 1880-1930 - Jubilee Souvenir (report on the 10th Annual meeting of the C.E.Z.M.S at Prince’s Hall, London in 1890)
• Fagg, Margaret G. (1927) Two Golden Lilies from the Empire of the Rising Sun, Marshall Bros, London

Whilst in Foochow, China in late 1888, Clara became ill and was instructed by the mission doctor to return home to recover. She asked Mrs Ahok to accompany her, suggesting that if prospective recruits could see and hear a genuine Chinese convert, it might inspire them to serve as missionaries in China.
With the permission of her husband, to whom she was devoted, Mrs Ahok agreed to do so, accompanied by a servant. She was genuinely concerned about her ailing friend travelling alone, and hopeful that she might well be able to influence people in England of the need for more Christian workers in China. Mrs Ahok and Clara departed from Foochow on 26 Jan. 1890.
Clara and Mrs Ahok journeyed back to Ireland via Colombo, where they met with Clara’s sister Pearl and her husband Rev. John Galloway Garrett, who were missionaries there at the time.
Back in England and Ireland, Mrs Ahok and Clara travelled around conducting a number of talks about the state of the mission to China and the need for more missionaries. At first Clara served as interpreter, but she was later assisted by the wife of Rev. Robert Stewart, another missionary from China.
Mrs Ahok did almost 100 presentations, including at the Parochial Hall at Clontarf, Dublin (Clara’s home parish), and later at the 10th Annual Meeting of the Church of England Zenana Society, at Princes Hall, London. Mrs Ahok was always seated because of her small feet (about 2½ inches) - as a young girl she’d been subjected to the Chinese custom of foot-binding.
She was quoted as follows (C.E.Z.M.S. 1930, pp18-19):
"To my Sisters in England. I have come from China from Foochow and come to England for what business, and what purpose? The road here was very difficult, sitting in a boat for so long! Very tiresome it was, to be on the rough sea, with winds and waves, for the first time! "My servant (Diong Chi) and I have come here. We are strangers! We raise our eyes and look on people's faces, but we can see no one we know no relative, no one like ourselves all truly strange! I left my little boy, my husband, my mother all this; for what purpose do you think? It is only, entirely for the sake of Christ's Gospel I have come"
It was God's Holy Spirit that led me to come. He wanted me to do what? Not to amuse myself, but to ask and invite you to come to China to tell the doctrine of Christ. How could you know the needs of China without hearing them? How could you hear unless I came to tell you?
'Now you can know, for I say the harvest in China is very great, but the labourers are so few, "Now my great desire is that the Gospel of Christ may be known on earth as it is in heaven. It is not yet known in China, and because the great houses have not yet heard the Gospel, all their money is spent on the idols, sacrifices, and burning incense".
Now I pray God to cause, whether guniongs (unmarried ladies) or sing-sang-niongs (married ladies), quickly to go and enter these houses with the Gospel. "Now I ask you, raise up hot hearts in yourselves and quickly help us: "First. Will you come back to China with me? Second. If you cannot, will you cause others to come, by sending them and doing what you can to help them to come?"
Mrs Ahok had planned to remain in England for longer, but after four months she received word that her husband had become ill. On 26 Jun. 1890, she departed London en route home to China via Canada, accompanied by a Miss Mead – one of the new recruits who had responded to her call. She was delayed in Vancouver waiting for a steamer, and took the opportunity to give six presentations at a Church there. A letter some time afterwards from the minister in Vancouver informed her that three new missionary societies were formed in Vancouver as a direct result of her inspirational talks.
Sadly, when she reached Foochow she found that her husband had already died. Some relatives deepened her grief by blaming her faith for her husband’s death. She lost much of her wealth and status but she remained positive about, and faithful to the mission. She later offered her home as a missionary school for Chinese girls from non-Christian homes and her services as a teacher.
Contemporary commentaries accredit Mrs Ahok’s visit to England for the much of the success in the recruitment of missionaries to China during the 1890s.