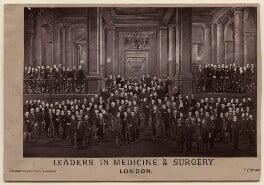 Jabez Hogg (1817–1899) was an ophthalmic surgeon, the youngest son of James Hogg and Martha, his wife, was born at Chatham, where his father was employed in the royal dockyard, on 4 April 1817. He was educated at Rochester grammar school, and in 1832 was apprenticed for five years to a medical practitioner. In 1843 he published a 'Manual of Photography,' which brought him to the notice of the proprietors of the 'Illustrated London News.' He joined the staff of this periodical, and from 1850 to 1866 he acted as editor of a series of illustrated educational works published by Mr. Herbert Ingram. In 1846 he was sub-editor of the 'Illuminated Magazine,' to which Hablot K. Browne and John Leech both contributed, and he edited the 'Illustrated London Almanack' for fifty-one years.

On 1 Feb. 1855 he was appointed at the Royal Westminster Ophthalmic Hospital as personal assistant to Guthrie, the founder of the hospital, and here he was elected to the office of surgeon on 2 Feb. 1871, a position he resigned under an age limit on 7 June 1877. He was also ophthalmic surgeon to the Hospital for Women and Children in the Waterloo Bridge Road and to the masonic charities.

--Dictionary of National Biography, 1901 supplement, Volume 2. (go to pages 432 - 433) FYI... This information is in the Public Domain in the United States. I have taken the liberty to paraphrase for the sake of clarity. --AMB

He was my great Grandfather...