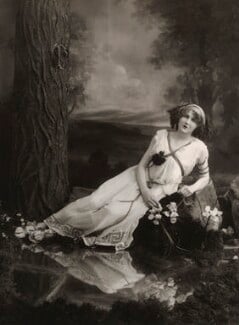 The actress Zoe Gordon, whose real name was Christina Purvis Beattie, was born in the Newington area of Edinburgh in 1888. She was the elder daughter of George James Beattie (5 April 1850 – 22 October 1907), senior partner of William Beattie & Sons, timber merchants, builders and contractors, and sometime Justice of the Peace, and his wife, Ellen Eliza 'Lily' (24 February 1855 – 14 July 1922), daughter of Dr. Thomas Watson of Glasgow. One of her maternal uncles was Thomas Malcolm Watson (1854 – 8 August 1929), professionally known as Malcolm Watson, theatre critic to The Daily Telegraph and dramatist.

Her polite but not exciting career began early in 1909 when she joined the chorus of The Merry Widow at Daly's Theatre, London, where she understudied (but never played) Gabrielle Ray's part of Frou-Frou. Following the end of The Merry Widow's run on 31 July 1909 she was next seen, billed as 'MISS ŻOË GORDON (from Daly's Theatre),' on tour in the autumn of that year with Charles Kay, 'The Devonshire Entertainer' with 'The Pinks,' 'Society Entertainers. The Acme of Refinement.' Other engagements followed, including (billed as 'from the Gaiety Theatre) principal girl at Christmas 1910 in the pantomime Humpty Dumpty at the Theatre Royal, Bournemouth. Her appearances were confined to small parts as when she joined the cast of the revue, Everybody's Doing It (Empire, Leicester Square, 12 February 1912) in which she understudied Unity More and Ida Crispi. During the latter's indisposition of several weeks, Miss Gordon shared her part with Peggy Ross, including a scene with Robert Hale in which she gave an imitation of Gaby Deslys. (See NPGx102792 for Ida Crispi in the role)

Miss Gordon was seen in several other productions including as Clara in a revival of George M. Cohan's farcical play, Broadway Jones at the Prince's Theatre, Shaftesbury Avenue, 6 September 1916. That same year she was photographed by Claude Harris. During 1918 and 1919 she appeared as Sabel Jackson in James Montgomery's farcical comedy, Nothing But the Truth at the Savoy Theatre. (See the Foulsham & Banfield photograph of her with Dorothy Minto in this production, The Bystander, Wednesday, 9 April 1919, p. 89)

During an apparent lull in Miss Gordon's career during the 1920s she appeared infrequently. A notable exception was for the special matinee for the Shakespeare Memorial Theatre Fund at Drury Lane Theatre on Tuesday, 9 November 1926 when she played Miranda in the Cave scene from The Tempest. Her next appearance was as Iris Fraser in The Bachelor Benedicts, a comedy by her sister, Dhalia Gordon (Ellen Radwell Beattie, 1892 – 3 August 1965), which was produced at the Little Theatre, Hove on 25 November 1926.

On 5 November 1929 Miss Gordon was among the cast of Noël Coward's operetta, Bitter Sweet, when it opened at the Ziegfeld Theatre, Broadway. Between then and her return to England at the end of April 1930 she had met and married a Danish student called Vagn Riis Hansen (1906-1977). The latter, who was to become known in London society as 'The Great Dane,' was from the mid 1940s the business manager and long-time partner of the artist Oliver Messel (1904-1978).

Born in England in about 1895. Red-haired lady who began as a model and later became a successful drama and comedy theatre star. She appeared in only one film, a drama 'The Sins of Youth' directed, written and starring Ernest G. Batley and his daughter Dorothy Batley for the Central Film Company in 1919. She appeared on the WD and HO Wills Scissors cigarette cards in orange and mauve surrounds, produced in 1916.