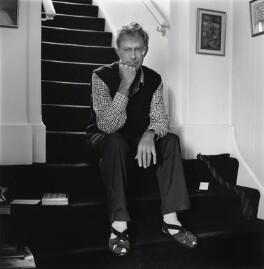 Born in Warwickshire in 1939, Jonathan Harvey was a chorister at St Michael’s College, Tenbury and later a major music scholar at St John’s College, Cambridge. He gained doctorates from the universities of Glasgow and Cambridge and (on the advice of Benjamin Britten) also studied privately with Erwin Stein and Hans Keller. He was a Harkness Fellow at Princeton (1969–70) and Professor of Music at Sussex University between 1977 and 1993, where he remained an Honorary Professor; between 1995 and 2000 he was Professor of Music at Stanford University (US). He was an Honorary Fellow of St. John’s College, Cambridge and was a Fellow at the Institute of Advanced Study in Berlin in 2009.

An invitation from Boulez to work at IRCAM in the early 1980s set the composer on a path that has characterized his whole career, and which resulted in eight realisations at the Institute, and two for the Ensemble Intercontemporain, including the celebrated tape piece Mortuos Plango, Vivos Voco, Bhakti for ensemble and electronics, and String Quartet No.4, with live electronics. Harvey also composed for most other genres: orchestra (including Tranquil Abiding, White as Jasmine and Madonna of Winter and Spring – the latter performed by the Berliner Philharmoniker and Simon Rattle in 2006), chamber (four string quartets, Soleil Noir/Chitra, and Death of Light, Light of Death, for instance) as well as works for solo instruments. He wrote many widely-performed unaccompanied works for choir – as well as the large-scale cantata for the BBC Proms Millennium, Mothers shall not Cry (2000). His church opera Passion and Resurrection (1981) was the subject of a BBC television film, and has received over twenty subsequent performances. His opera Inquest of Love, commissioned by ENO, was premiered under the baton of Mark Elder in 1993 and repeated at Theatre de la Monnaie, Brussels in 1994. His third opera, Wagner Dream, commissioned by Nederlandse Oper and realized at IRCAM was premiered to great acclaim in 2007. A recording of this performance has since been released on the Cyprus Records label and has received critical praise. Wagner Dream has also been performed on the concert stage in London’s Barbican Hall with the BBC Symphony Orchestra and conductor Martyn Brabbins. A further staging is planned by Welsh National Opera in 2013 with conductor Nicholas Collon. 2008 saw the premiere of Messages (for the Rundfunkchor Berlin and the Berlin Philharmoniker) and Speakings (co-commission with BBC Scottish Symphony Orchestra, IRCAM and Radio France); Speakings was the culmination of his residency (2005-8) with the BBC Scottish Symphony Orchestra from which Body Mandala and …Towards a pure land have also emerged. Two of these works featured on the Gramophone Award-winning NMC disc released in the same year, and Speakings was released on an Aeon disc the following year.

Harvey’s works are now in constant demand from a host of international organisations, and his music is extensively played and toured by the major ensembles of our time (Musikfabrik, Ensemble Modern, Ensemble Intercontemporain, ASKO, Nieuw Ensemble of Amsterdam and Ictus Ensemble, to name but a few). His music has been showcased at most centres and festivals for contemporary music. Some 150-200 performances are given or broadcast each year and about 100 recordings of his music have been issued on CD. He held honorary doctorates from the universities of Southampton, Sussex, Bristol, Birmingham and Huddersfield, was a Member of Academia Europaea, and in 1993 was awarded the prestigious Britten Award for composition. In 2007 he was awarded the Giga-Hertz Prize for a lifetime’s work in electronic music. In 2009 he received several awards for his music, including the prestigious Prince Pierre of Monaco Prize in Musical Composition for his orchestral work Speakings, and the Charles Cros Grand Prix du Président for a lifetime’s work, becoming the first British composer ever to receive this coveted honour since its inception in 1970. In 2012 Harvey’s work Messages won the RPS Award for Large Scale Composition and in the same year he received a lifetime achievement award from the Incorporated Society of Musicians.

In October 2011 his major large-scale commission Weltethos (for orchestra, choir and children’s chorus), with a text by Swiss theologian Hans Küng, was premiered in Berlin by the Berliner Philharmoniker and Sir Simon Rattle. In June 2012 the same work opened the Cultural Olympiad festival in Birmingham’s Symphony Hall with the CBSO, and was performed by them at London’s Southbank Centre in October 2012. The BBC marked its appreciation of Harvey’s international standing in January 2012 with a weekend dedicated to his music at the Barbican; the ‘Total Immersion’ festival featured many of his major works, including the British concert premiere of Wagner Dream.

Harvey’s two books were published in 1999, on inspiration and spirituality respectively. Arnold Whittall’s study of his music appeared in 1999, published by Faber & Faber (and in French by IRCAM) in the same year. Two years later John Palmer wrote a substantial study: “Jonathan Harvey’s Bhakti” Edwin Mellen Press, and Michael Downes’ penetrating book on Songs Offerings and White as Jasmine appeared in 2009 with Ashgate.

In the final year of his life, and despite suffering from serious illness, Harvey was able to complete three pieces, Cirrus Light for solo clarinet, The Annunciation for the choir of St John’s College Cambridge and, fittingly for someone whose life was filled with spirituality, the choral work Plainsongs for Peace and Light.