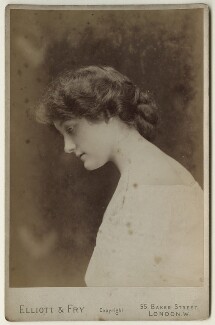 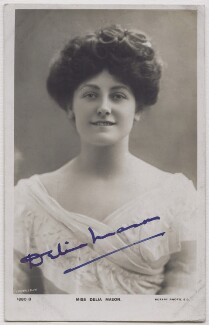 digitised text from an Australian newspaper, not corrected sorry, but Delia is mentioned as a new member of the London Gaiety Theatre.

In Saturday's issue the arrival .( the fifth London Gaiety Company by the Ventura at 12:40 a.m. was duly chronicled, but the new artists did not reach the wharf until alter the customary daylight inspection by the health officer. The stay of the company was brief Their doings included a harbour picnic on the Estrella, given by Mrs J C Williamson, at which Mr G L Goodman presided in the absence of Mr J C William-son, who is awaiting the newcomers in Melbourne. The weather wsa ideal, and as Middle Harbour and the Lone Cove River were explored, the visitor were charm ed with the scenery and with the cordial informality of the whole arrangements, from which useless speech making wai excluded. On Saturday night the entire party were present at "The Light that Failed." The officially revised list of the company reads as follows -Misses Madge Crichton, Delia Mason (a young soprano who was at the Royal College of Music for five years before joining the London stage), and Elsa Ryan (an American artist), Miss Maud Hobson, a favourite member of the fourth Gaiety Company, Miss Eva Kelly (an American actress), Miss Angy Edwardlne (a niece of Mr George Edwardes), Miss Barbara Huntley (a sister of Mr G P Huntley), and Miss Kathleen War ren. Miss Warren la a stately and handsame brunette, who has been live years at Mr George Edwardes' tbca 1res The principal comedian is Mr Geo P Huntley, with whom s associated Mr Maurice Farkes, a popu-lar tenor of French descent, and Messrs Jack Frazer,

The new musical conductor is Mr Frank Tours, a son ol the late Berthold Toms, a Dutch composer long re sident in England, where he is widely known for his anthems masses, and hymns. The whole party is in charge of Mr E T Steyne, general manager and stage director, whose post, in the event of the production of "Kitty Grey," 'The Girl from Kays" and "Madame Sherry," will be anything but a sinecure Last night the visitors closed their Svdney experiences by lciving by the cypress for Melbourne, where their season opens with ' Three Little Maids" at the Princess Theatre nert Saturday

Thli is tho fifth tour of the same dimeter directed by Messrs George Edwardes aud J O Williamson, but It occurs after an interval that dates back to lS9a, «u that quilo a new set of playgoers has grown up in the interval The first'Leslie Farren combination ot 1S8& included Mr Charles Dinby, Misses Marion Hood, Letty Lind, and Sylvia Grej, whilst in the second tour by the same stars in 1S81 the omy important change involved Hie substitution of Miss Grace Pcdley for Mi«s Hood. In 1S02 93 Messrs E J Lonncn and Robert Courtneidee were the chief comedians, with Misses Vddie Conyers, Alice Leimir, Alice Lethbridge, katie Barrj, and again Marion Hood also in the cast Finally, in ISOo Mr J A E Malone arrived hero in charge ol a company from the Prince ot Wales ThcatT, consisting of Messrs Lou» Bradfield, Harrv Monlthous», Charles Ity Icy (formerlj of the Royil Comic Opera Company here)

Tills new Gaielj partj of 1004 is also chiefly from the Prince Of Wales' Theatre Mr Geo P nuntlej comes hero is the accredited ' stir ' ol the compiny, but the other artists will mike their own reputations as fortune and their own talents miy decide When visited by the musical and dramatic critic of the "ncrald ' it the Australia on Saturday Mr nuntloj explained that the Gaiety party lett England last'Au gust, and opened at Dolj s Theatre, Ne» lOrk, in Sep tomber, with Three Littlt Maids " The piece taught on to such an «tent that it had to be transferred to the Garden Theatre, the entire run lasting nearly half a j car After that the stay in each citj was limited to four weeks m Boston, two at Philadelphia and one eich at Wishlngton, Cleveland, Pittsburg, Baltimore, Buffilo, Toronto, and other cities Chicago and other places were lett for the return visit, as the Austra Han dates cut into the centre of the American tour, which will be resumed in Septembir, after s stay at the antipodes of only IS weeks

Turning to his own doings and stage career, Mr Huntley remarked - 'I believe that 1 ahiU not be with the company after the Sydney season, as Mr George fdw ardes has cabled for me to join him at the Prince af "Wales' Theatre, London, in October, for i proposed new production there it was at that plaj house that 1 created tho character ot Lord Cheyne, in 'Three Little Maids' which ran f»r a j ear there Cheyne Is a distinct species of military 'Johnnie,' who really exists, though I ira his 'Christoph« Columbus for stage purposes AUo in lint cast were \Ils«es Crlch ton Dobson, Kcllj, and Mason, Messrs Farkoa and Carroll Miss Itjan replaced Miss Hilda Moody in New iori., and other chmges were made Before

Three Little Miids there was i fine run fpr 'Kitty Grej,' at the Apollo, where I originated Lord Plan tasenct another musical comedy swell, whilst in The Girl from hay's,' I follow Mr Willie Ldouin, who was the first iloggenbelmer a Hebrew mil

Uonairc As regards mj early stage career, it dates almost from infancy, as both my parents were well

known artists Mr and Mrs Frank Huntley were both prominently connected with Henry Irving's first seasons at tile Lyceum Theatre, under the Bateman management about 30 years ago }tj mother was i elerer character actress, and was the original La I rochard in The Two Orphans ' with Win Rlgnold and Henry \cvllle at the Olympic and she was the original old woman in 'Romany Rye,' with Wilson Birrctt I began the serious busln*ss of my career In four tours in modern comedy with the Kendals, ind drifted into musical pieces mainly through ac ccptlng a pantomime engagement with Robert ( nun.

neidaje at Manchester Mr Ceurtneidge, who, I hear, recently produced the Shakespearian pieces for Mr George Musrreres company in Australia, on his re turn t« London produced The Duchess of Dantzlc,'

for Mr Edwardes and his worl In Manchester in the same line was equally first rate My theitncal experiences hive «Ino taken me to St Petersburg with a Gaiety company managed by Mr Malone and I hive "¡pent several months In Spain and Turley sight nceing The Vmerican tour was highly enjoj ailie from the standpoint of an inveterate traveller, be caine as we never plived more thin the one piece there wis plentj of time for plcísure nukli ,. In australia, however, if Mr Williamson decides to pro duce two or more pieces there will be » great deal to

It maj be added that Mr nuntley is married to Miss I va holly, an American actress «ho first visited Louden with An American Iieiutj ' five years ago and has stajed there until the present tour appearing at the Shaftcsburj, apollo Galetv, and Prince of Wales theatres Miss Barbara Huntley s career hu been chiefly dramatic, as she toured the United Stitts five times with the Ivendiln and Ras the Fmprcss Poppoca in the î»ew îork production ef "The Sign of the Cross," with Miss Lilian M'o'irthy md Iii Uiarlts Dalton in th« ]H