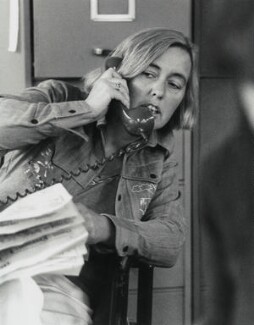 Born in South Wales on 4 October 1930, Peter Johns started his career as an illustrator, before turning to photography.
Having studied illustration at Swansea College of Art, he was taken on by The South Wales Evening Post and Herald of Wales, to produce all their editorial and advertising work from 1950-1961.
The gift of a Rolleicord camera, and then a Rolleiflex, from an indulgent aunt revealed his talent for observation and composition and he started working for the same local newspapers as a photographer. Collaborating with a local journalist, Alan Road, Peter produced a series of features on Welsh miners that caught the attention of both The Observer and The Guardian newspapers and in 1965 Peter and his family – wife Valerie and daughters Susie and Lisa – relocated to London where he became one of three full-time staff photographers on The Guardian.
Peter Johns was part of the new wave of British photojournalists including Ian Berry, Philip Jones-Griffiths, David Hurn and Don McCullin. His work for The Guardian encompassed all areas of photojournalism. He handled coverage of news events – marches, demonstrations, elections and strikes – and in-depth features including drug addiction, poverty and homelessness, all with great sensitivity. Of particular note is his series on the Aberfan disaster and its aftermath. In between major events, however, he always contrived to cover anything to do with the arts, music and theatre and produced some stunning portraits of figures such as Anthony Quinn, Sam Wanamaker, Tennessee Williams, Meryl Streep, Max Wall, John Osborne, Rudolph Nureyev, and many others, his personal favourite being Henri Cartier-Bresson.
Peter always worked in black and white using Leica, Pentax and Minolta cameras, and made his own prints. During his time at The Guardian he also taught an evening class in photography at a local adult education college, took production photographs at Greenwich Theatre, for front-of-house display, and contributed to a number of exhibitions including Four Artists and a Photographer, South London Art Gallery (1973), and Peter Johns Photographs, Greenwich Theatre Gallery (1979) and Woodlands Art Gallery, London (1980). His work has also been shown at The Photographers Gallery London, and The Photogallery St Leonards on Sea.
In 1981 Peter and his wife and younger daughter moved to Portugal, to the quiet Algarve countryside, where they set up and ran a photography workshop and a small country restaurant with a gallery space, and he continued working as a freelance, contributing to The Guardian and The Independent.
They returned to the UK in 2000, settling in Hastings Old Town where he began to concentrate on documentary and landscape work, including, for the first time, some
colour material, and exhibited his new work at Rye Art Gallery in 2002, then had a retrospective exhibition at Whitstable Museum & Gallery in 2004, and a retrospective at The Guardian, King’s Place. In 2006 he donated his archive to the Scott Trust Foundation.
Peter and Valerie were together for over 60 years; she died in the summer of 2014 and Peter never really recovered from this loss. He died peacefully in his sleep in the early hours of 11 March 2017.

Of his work, Peter said:  “The camera is essentially a notebook for recording instances in time and space, but above all for recording life as it presents itself. Photographing people, places, events – anything – must, for my part, be done without being contrived.”