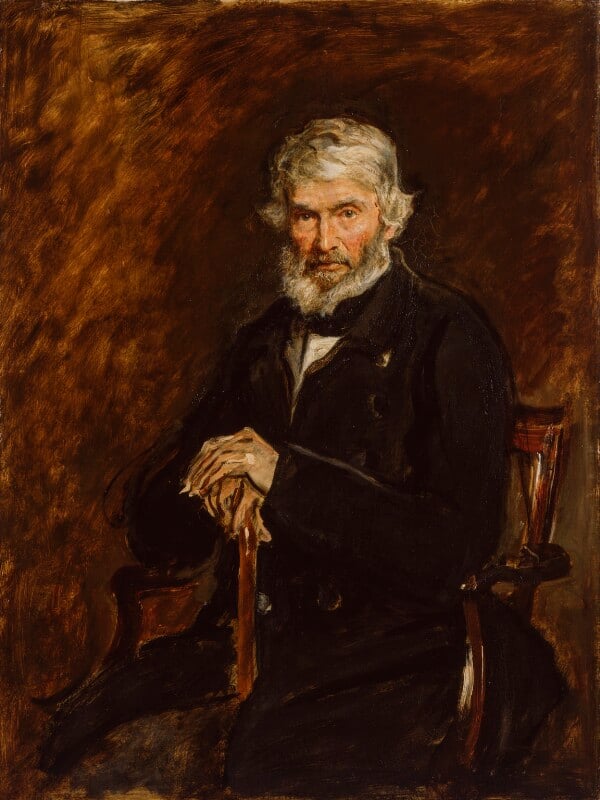 The artist was dissatisfied with the progress of this portrait, and did not finish it, however Carlyle sitter described it as ‘strikingly like in every feature.' In 1913 it was attacked by suffragette Anne Hunt with a meat cleaver.

Trial of social activists Annie Besant and Charles Bradlaugh following their publication of a book by the American birth-control campaigner Charles Knowlton, which suggested that working class families should be able to practice birth control. Although found guilty, the case was thrown out on a technical fault.

The Grosevenor Gallery opens, founded by Sir Coutts Lindsay, as a rival to the Royal Academy. It exhibited work by artists such as Edward Burne-Jones and Walter Crane, outside of the British mainstream, and became famous as the home of the Aesthetic movement.
The first Lawn Tennis Championship is held at Wimbledon with around 20 male competitors, witnessed by a few hundred spectators. Spencer Gore the first singles champion, wins 12 guineas.

The American inventor Thomas Edison invents the tin foil phonograph, combining the technologies of the telegraph and telephone. Experimenting with a stylus on a tinfoil cylinder, he recorded and played back the short message 'Mary had a little lamb'.