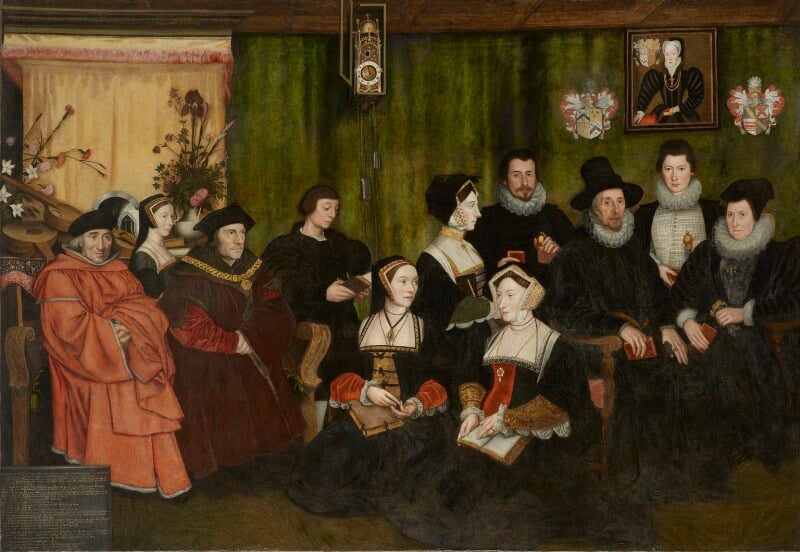 Plays and games are banned because of the Plague, which had killed 15,000 people in London the previous year.
Robert Devereux, Earl of Essex is made a Privy Councillor.
The theologian Richard Hooker publishes Of the Laws of Ecclesiastical Polity, the first systematic defence of the principals of the Elizabethan Church.

The playwright Christopher Marlowe dies after receiving a stab wound in a tavern brawl.
William Shakespeare writes the epic poem Venus and Adonis.
The group portrait of Sir Thomas More with his family and descendants is painted by Rowland Lockey. It is partly copied from an earlier portrait by Hans Holbein the Younger (1527-8).

Henry IV of France converts from Protestantism to Catholicism to secure the support of the majority of his subjects.
The Convention of Uppsala demands that Sigismund III of Poland accepts Lutheranism as the national Religion of Sweden.

In relation to the above comment, Roy Strong's Tudor and Jacobean Paintings vol.1 regarding the NPG collection has a detailed examination of the crests.

The reply to the question by Steve Mott is given in John Guy, Thomas More, A very brief history, 2017,
Frank Mitjans

Hi, I am a room guide at Montacute house and have noticed in the background above the heads of the two John Mores there are over-painted coats of arms, (at least three) . I assume these are well known about but would be interested in why they are there and when they were painted over and for what reason. Many thanks Steve