3 of 3 portraits of Conroy Maddox 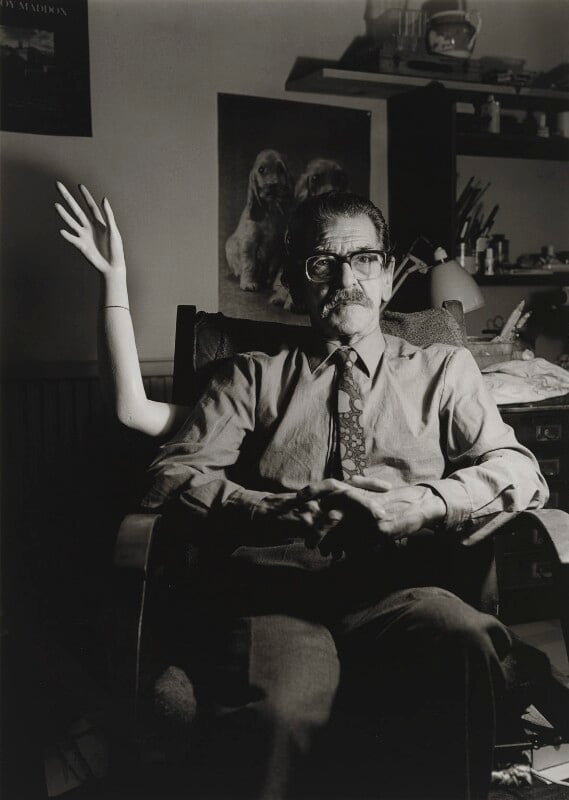 A Pan Am jumbo jet is brought down by a bomb over Lockerbie in Scotland, killing 259 passengers and 11 people on the ground. The Dumfries and Galloway Constabulary launched Britain's largest criminal investigation before convicting a Libyan intelligence officer of planting the bomb.

Professor Stephen Hawking publishes his popular book on cosmology, A Brief History Of Time.
Damien Hirst and his fellow Goldsmiths students organise the exhibition Freeze in a disused block in the Docklands. The exhibition launched the careers of many of the young British artists (YBAs) associated with Brit Art including Gary Hume, Michael Landy, Sarah Lucas, Angus Fairhurst, and Anya Gallaccio.

Iraq drops poison gas on the Iraqi Kurdish city of Halabja, killing thousands of civilians. The city was held at the time by Iranian forces and Iraqi Kurdish rebels, although there was initially some debate over which side was responsible for the atrocity. It was the largest-scale chemical attack on civilians in modern times.

Maddox, Conroy Ronald (1912-2005), artist, was born on 27 December 1912 in Ledbury. His earliest memory, which was to influence his mature paintings, was of travelling to a Manchester hospital in August 1915 with his sister and mother to visit his father, who had been wounded at Gallipoli. His elementary education began in 1918 at the Court House School, where he was singled out for an art prize. From there he went in 1924 to Ledbury grammar school and then the newly opened Chipping Norton county school, when the family moved to Chipping Norton in 1928 to take proprietorship of the Blue Boar inn. He spent his free time painting landscapes in one of the inn stables. In 1933 the Maddox family moved again, to Birmingham. Aged twenty, Maddox started work as a clerical assistant in a solicitor's office. He went on to be an assistant in an analytical laboratory and then a designer in a car mascot casting firm. By 1935 he was working more permanently as a designer of trade fair exhibition stands.

The year 1935 also coincided with Maddox's discovery of surrealism, which he regarded as a turning point. He spent the summer of 1937 in Paris, attending classes at the art academy in the rue de la Grande Chaumière, where he experimented with 'invented surrealist transformations of the model'. On his return he exhibited at the Birmingham Group exhibition at the Lucy Wertheim Gallery in September 1937. By this time he had met the painter John Melville and his brother Robert, a writer and art critic, with both of whom he formed the nucleus of the surrealist group in Birmingham, which was to include Eric Malthouse, Desmond Morris, Emmy Bridgwater, Oscar Mellor, Stephen Gilbert, and William Gear. In the summer of 1938 Maddox again stayed in Paris, where he associated with William Gear, Reinhart Kalnine, and Georges Hugnet, and met Marcel Duchamp and Man Ray, the last of whom influenced his Onanistic Typewriter (1940), a typewriter that sports vertical nails on each of its keys. In January 1939 he participated in the Living Art in England exhibition at the London Gallery and had a page devoted to him in London Bulletin. Maddox's artistic production at this time was diverse: his lyrical, colourful gouaches depicting biomorphic, semi-abstract figures contrasted with collages containing violent and erotic surrealist juxtapositions. His object-mannequin Cloak of Secrecy (1940) was suggestive of dismembered limbs and a severed female body.

At the outbreak of the Second World War Maddox entered a reserved profession with the Birmingham firm Turner Brothers, manufacturers of aircraft parts. He continued to flourish as an artist and played a key role in the Zwemmer Gallery's Surrealism Today exhibition. His collages were equally disconcerting and, at the height of the war, several were seized by the special branch during a raid on the home of Simon Watson Taylor, on suspicion of being coded messages to the enemy or anarchist propaganda. Ironically, Maddox's war work had intensified at this time with a posting to British Thomson-Houston in Rugby for secret work on the stereopticon projector used by Rank Studios. Maddox maintained that organized religion was corrupt and he repeatedly attacked the clergy in his work. At times this attitude resulted in irreverent humour, particularly evident in a series of staged photographs, Entertaining a Nun (1946), in which Maddox progressively inebriates and plays pranks on a young woman dressed as a nun. At this time he also invented the semi-automatic procedure of 'ecremage', which ranks alongside coulage, fumage, grattage, and decalcomania as a surrealist painting technique.

In 1954 Maddox moved to London and, in 1965, settled at 17A Lambolle Road, Belsize Park, his ultimate home and studio. There he developed a more representational style of painting, as well as experimenting with pop art techniques. The 1967 surrealist festival, The Enchanted Domain, involved Maddox both as exhibitor and organizer, and served to renew his friendship with E. L. T. Mesens, with whom he collaborated on collages. The early 1970s saw great productivity and regular exhibitions in London, as well as regular contact with the Chicago surrealist group. A fascination with hysteria and the nineteenth-century Parisian neurologist Jean-Martin Charcot led to works depicting madness and mayhem at the Pitié-Salpetriere hospital, which was in keeping with the defamiliarization of the commonplace that underpinned all his work. When the Hayward Gallery mounted the Dada and Surrealism Reviewed exhibition in 1978, Maddox felt that surrealism had not been properly represented and promptly organized a protest exhibition, Surrealism Unlimited.

A retrospective was held at the Stoke-on-Trent City Art Gallery in 1995, and the last of some twenty one-man exhibitions was held at Whitford Fine Art in 2002. During his seventy years as an active surrealist, Maddox produced over 2000 works and constantly championed the theoretical purism of the surrealist movement. He died on 14 January 2005 in the Royal Free Hospital, Camden, London. His ashes were scattered in the garden of his home.