11 of 16 portraits matching these criteria: 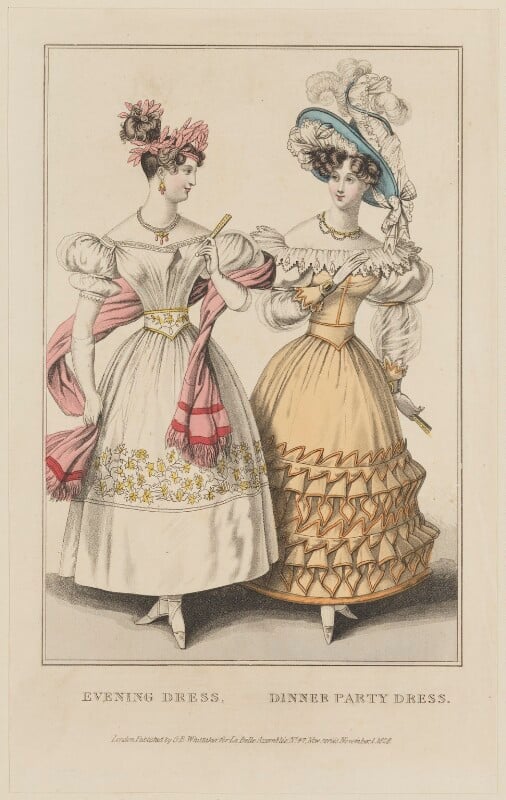 Described in the magazine:
Evening Dress. A dress of white satin, with a very broad hem round the border, headed by a narrow rouleau; above which is a full and splendid embroidery, embossed in floize silk. The body is en gerbe, with a pointed zone round the waist, embroidered in a similar manner with the border round the skirt. A very narrow tucker of blond surrounds the bust: the sleeves, short and very full, are of white crape, and are confined in the centre by a white satin band. The hair is arranged à la Grecque, and richly ornamented with pink ears of corn, grouped very close, but very tastefully, together. The ear-pendants are en girandoles, formed of three turquoise stones of a pear shape: the necklace is of pearls, with a girandole ornament in the centre, of turquoise stones, to correspond with the ear-rings. A drapery scarf of pink silk is worn with the above dress.
Dinner Party Dress. Over a white satin slip is a dress of amber crape, with the border ornamented by two very full flounces, en dents de loups, which stand out, in large and stiffened flutings: alternating with each quill, or fluting, is a point fastened down close to the dress, giving to this trimming a truly novel and unique effect. Next the shoe is a full wadded rouleau of amber satin; and the points and flutings of the flounces are edged with a narrow satin rouleau: above the upper flounce is an ornament consisting of oblique points, inclining towards the left side, formed of narrow satin rouleaux, in outline. The body is quite plain, and tightly fitting the shape: a very broad, falling tucker of blond, of a superb pattern, and set on full, surrounds the bust. The sleeves are short, and of white satin; over these are long sleeves of plain tulle, à la Marie, confined round the centre of the thickest part of the arm, by an amber satin band; and the wrist part of the sleeve is finished by a broad, pointed cuff of amber satin, the points edged round by narrow blond: a very broad bracelet of gold encircles the wrist, fastened by a large emerald, or a turquoise stone, set à l’Antique. The head-dress is a dress-hat of transparent crape, or stiffened net, of turquoise-blue; though some ladies, whose complexions will admit of it, prefer having the hat of pistachio-green satin: whichever may be adopted, this becoming hat is profusely ornamented under the right side of the brim, which is elevated, with blond, in fan-flutings; on the left side, which is brought down low, over the ear, is a rosette, at the edge of the brim, of white gauze brocaded ribbon, with ends. An ornament of satin, en bateau, the colour of the hat, waves gracefully across the crown, in front, and the whole is finished by a superb plumage of white feathers. The necklace is of wrought gold, of light and elegant workmanship, formed in festoons, which are caught up by various-coloured gems.

London Zoological Gardens open in Regent's Park. They provide both entertainment and a supply of exotic specimens for naturalists and anatomists such as Richard Owen who becomes a European authority on the subject.

Daniel O'Connell is elected Member of Parliament for County Clare but as a Catholic is not permitted to take his seat.